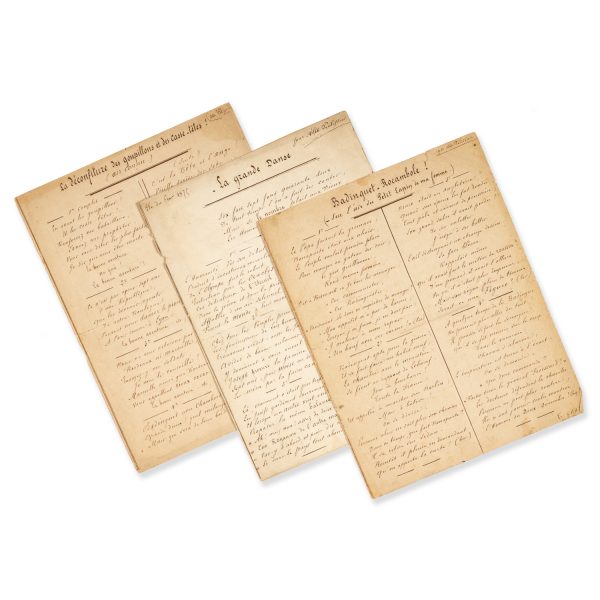 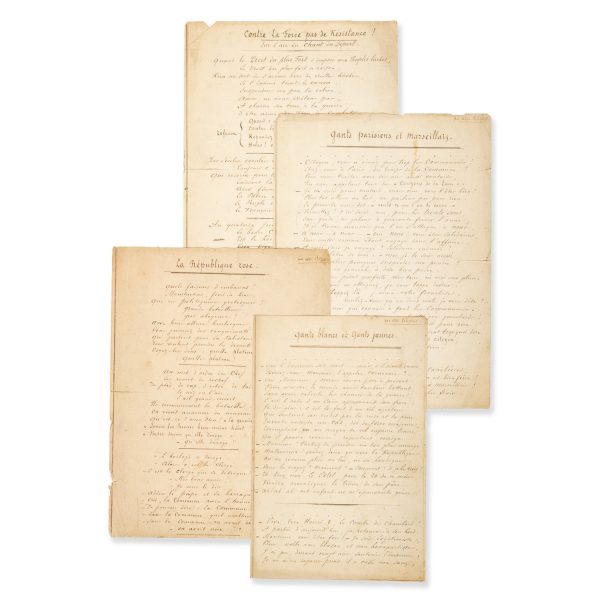 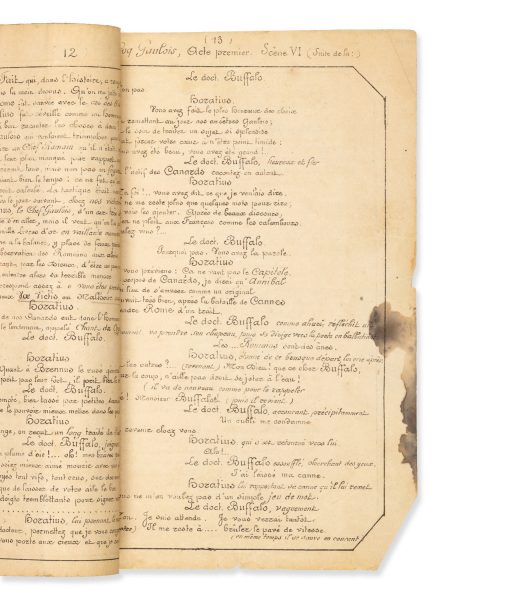 A Communard in exile : a small archive of unpublished poems and songs in manuscript, together with rare locally-printed ephemera. Isle of Pines, New Caledonia, 1875-1878.

French journalist and former soldier Alphonse Pélissier was condemned to death for his involvement in the Paris Commune of March-May, 1871. His sentence was commuted to deportation to the Isle of Pines in New Caledonia, where he arrived in November, 1872. During his political exile this unrepentant Communard collaborated as an editor on several issues of the newspapers Parisien Hebdomadaire and Parisien Illustré, which were just two of several periodicals printed by the Communards on the Isle of Pines.

This small archive comprises some of Pélissier’s original poems and songs in manuscript, all penned on the Isle of Pines between 1875 and 1877. None of these have ever been published. It also includes one of only two known extant copies of the January, 1877 Isle of Pines printing of the first act of his five-act satirical play, Le Coq Gaulois (the second act, announced for publication in February, 1877, appears never to have been printed), and rare individual issues of the local Communard newspapers Le Raseur Calédonien (11 February 1877) and the Album de l’Ile des Pins (21 September 1878), both souvenired by Pélissier during his exile on the island penitentiary.

The archive contains ten items in all, which are outlined below.

Although they were written on inexpensive, brittle paper, all of the manuscripts are complete, with old folds and occasional edge tears or stains.

(8). Le Coq Gaulois, ou les Misanthropes Socialistes. Comédie en cinq actes / par Alph. Pélissier. Ile des Pines, New Caledonia, January 1877. Small quarto (200 x 153 mm), stitched, lithograph printed, 16 pp; the subtitle is in manuscript in Pélissier’s hand; there is also an enigmatic inscription by the author at the head of the first page: Au petit Bartonneau. Ile des Pins, 2 Mai 1877. Alph. Pélissier. (Perhaps this is a reference to a performance of the play at a venue on the Isle of Pines?). Old ink stain at fore-edge margins (no loss of text except for a few letters on the last page), bottom corners a little dog-eared, else clean and complete.

It appears that only the first act of this play was published, although the forthcoming publication of the second act is advertised on the last page. ‘The action takes place in New Caledonia, the place of exile to which those convicted in the Commune of 1871 were sent to undergo their sentence’ (translation). Pélissier uses this stage comedy to criticise Judeo-Christian religion and also to satirise journalistic practice. The printing was almost certainly done by fellow deportee Hocquard, who had built a little studio for lithography on the Isle of Pines. There are two corrections to the text, in ink, in the hand of the author: on p. 4 a word is crossed out and replaced, and on p. 10 two lines are added. OCLC locates only one other exsample (BnF).

(9). Le Raseur Calédonien. Petit Journal abrutissant. Publication Hebdomadaire, rédacteur Gérant G. M. / Feuilltons etc. M. G. Prix 0,15 F. No. 1 Dimanche 4 Février 1877. Ile des Pins : Imp. Lith. Hocquard, 1877. 4 pp, on 1 bifolium, 225 x 175 mm; lithograph printed, first page illustrated with a depiction of a deported Communard seated on a coconut palm branch, who appears suitably bored (the subtitle translates as ‘A mind-numbing little newspaper’), and below it, a larger sketch of two Communards outside a paillote; the last side with music notation. Separated along the main fold, and with some marginal loss to the left of the title, else clean and complete.

The first issue of the first Communard newspaper printed on the Isle of Pines. In all there were only 11 issues of this title published, the last dated 24 April 1877. The contents of the first issue – which has both text and music – centre around the calls for an amnesty for the Communards and the creation of their very own journal, which was edited by Eugène Mourot and Victor Cosse and illustrated by Paul Geofroy.

Forty-five issues of this Communard newspaper were published on the Isle of Pines between 1 July 1878 and 14 May 1879. It published news from Europe as well as notices of local events and amusements for the deportees on the Isle of Pines, such as theatre performances. The editor of this issue was Léonce Rousset, who is the subject of the caricature illustration by J. Loth on the front page; other collaborators include H. Fouquier, Zuber and ‘une guêpe folle’ (‘a mad wasp’); later issues were edited by Théophile Bergès and Charles Pagès.

THE PARIS COMMUNE & THE COMMUNARDS

Mass social discontent in the aftermath of the French defeat in the Franco-Prussian War led to the creation of the short-lived Paris Commune of March 18 to May 28, 1871. The Commune was the seed of the French communist movement which would develop later in the Third Republic. It is estimated that 20,000 Communards were executed during the so-called Semaine Sanglante, and a further 7500 were jailed or deported to New Caledonia until a general amnesty was put in place over a decade later.

New Caledonia had been colonised by France in 1853, and from 1863 it replaced Guiana as the main destination of convicts transported from France. The convict population in New Caledonia accounted for the great majority of French residents there. At the height of deportation, the islands’ population of 50,000 comprised around 30,000 Kanak, 6000 convicts, 4000 political exiles (including Communards), 3000 soldiers, 2750 civilians and 1250 freed convicts. Of the four principal penitentiaries, the Isle of Pines was designated for Communard deportees exclusively. Roughly two-thirds of these Communards had received a simple deporation sentence, which meant they could live in small villages on the Isle of Pines. A smaller number were forced to serve out their deportation in a fortified place (usually the Ducos Peninsula), and about 300 were sent to Nou with a sentence of hard labour.

In 1874 six Communards – among them the high-profile Henri Rochefort – escaped from the Ducos peninsula and managed to reach Sydney, where they exposed the maltreatment of political prisoners in New Caledonia in the media. This, however, only resulted in a backlash from the French authorities, further restricting the prisoners’ privileges and largely preventing social interraction between the Communards and the Kanak population. However, during the Kanak insurrection in 1878, the Communards expressed support for Kanak self-determination in their own newspapers.

With the weight of public sympathy in their favour, the question of an amnesty for the Communards became a political issue in France. In January 1879 mass pardons were granted which excused many of the convicted deportees in New Caledonia. These men were allowed to return to France, but more than 1000 were forced to remain in exile because their sentences had been associated with crimes of violence. It was not until July 1880 that a total amnesty was ratified by the French parliament. Ultimately, a significant number of Communards chose not to return home and settled instead in New Caledonia, the Australian colonies, or New Zealand.

Born April 28, 1839 in Tain (Drôme). Son of Antoine and Sophie Fonprède; formerly soldier of the 7th regiment of hunters on horseback, then journalist in Paris. Unmarried. After the Siege of the capital, he went to Marseille to visit a member of his family. He then lived at 13, rue Pinsançon. In March 1871, at the start of the insurrection, he joined the insurgent camp. On March 28, Bernard Landeck appointed Pélissier general of the National Guard. On the morning of April 4, 1871, he went with Crémieux to Place Castellane, where General Espivent de la Villeboinest’s regular troops were encamped in the hope of finding an honorable end to the conflict. Having failed, he ordered the recall to call on the dissident battalions to fight. Before the council of war he appeared “still young, of medium height and well proportioned, with a beard.” According to the Gazette observer he stuttered very sharply and therefore spoke very slowly. In his indictment, the prosecutor clarified, speaking of Pélissier, that he was: “the general of the situation! … He braved ridicule with more courage than he braved the danger … On June 28, 1871, he was sentenced to death. On November 27, his sentence was commuted: he was deported to Nouméa where he was still at the end of 1878. He arrived in New Caledonia on November 2, 1872, on La Guerrière (second convoy). He was in Nouméa at the end of 1878, repatriated by La Loire and interned at Belle-Île after his commutation. Presumably amnestied in 1879 or 1880. Two letters that Alphonse Pélissier wrote to his brother Antoine (Belle-Île, April 9 and May 7-8, 1879) are in the file of the National Archives, a song “Ma Paillote”, taken from “Poésies et chanson inédites” by Alphonse Pélissier, was attached to the letter of April 9. (Translated from Le Maitron, Dictionnare biographique https://maitron.fr/spip.php?article67767, notice PÉLISSIER Alphonse par Roger Vignaud, version mise en ligne le 26 juillet 2009, dernière modification le 15 août 2017).