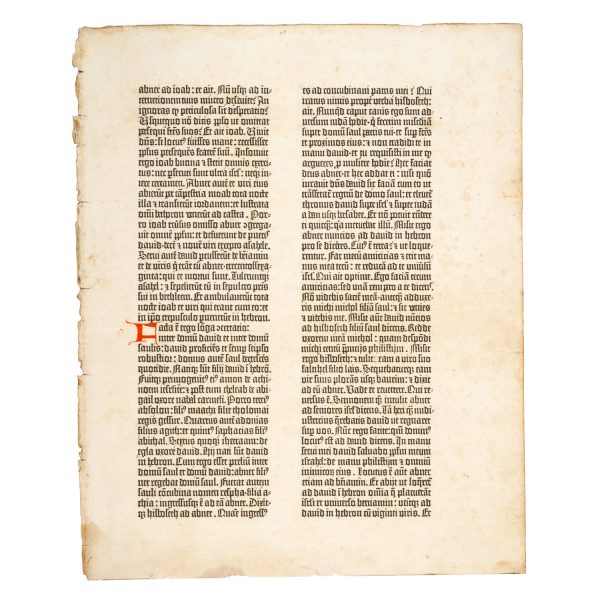 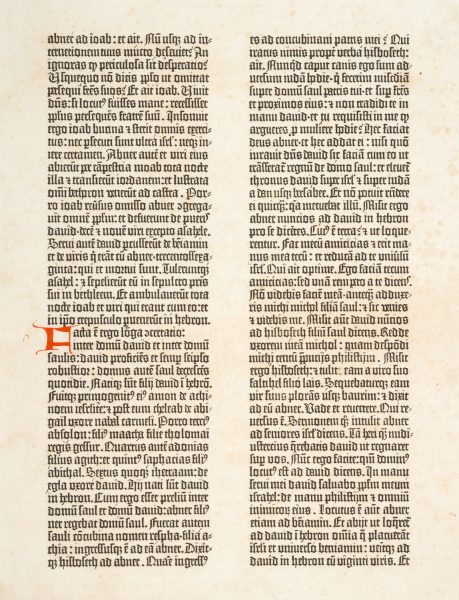 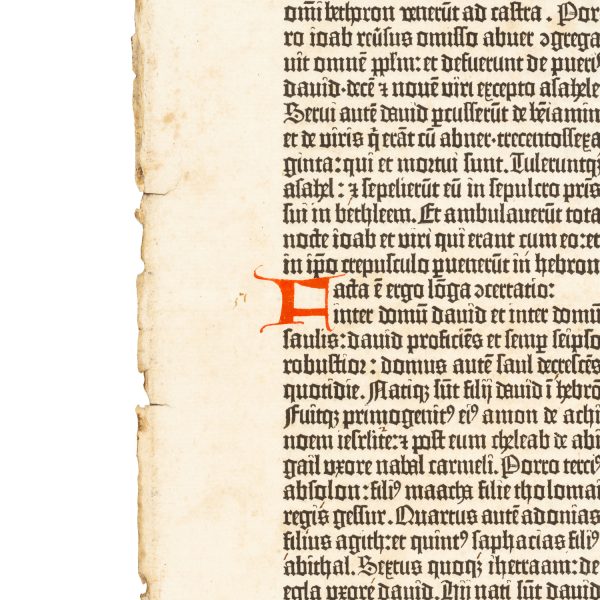 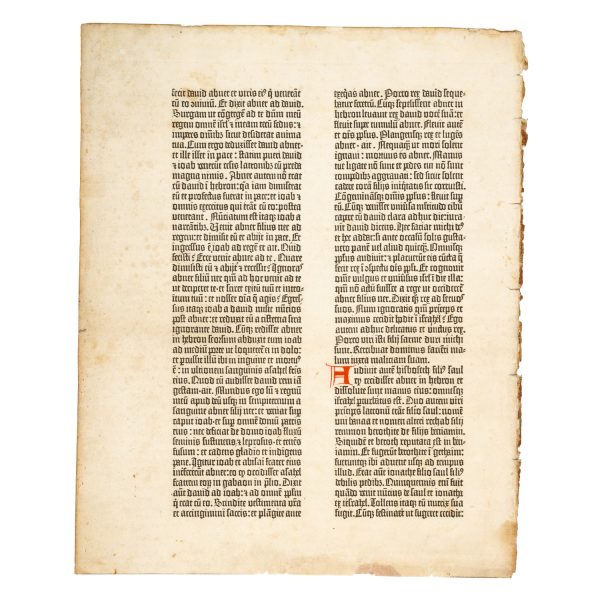 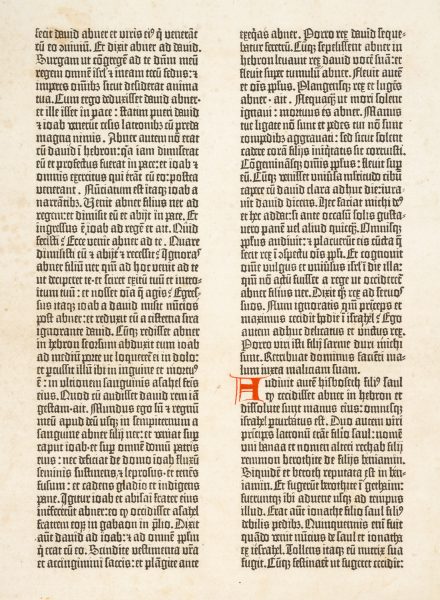 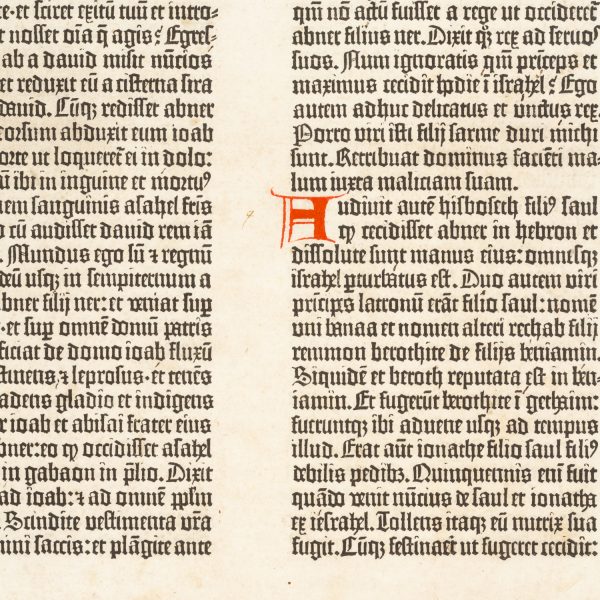 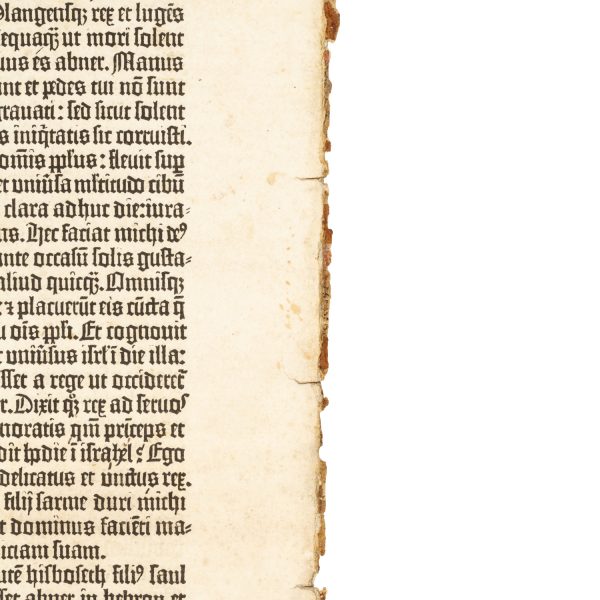 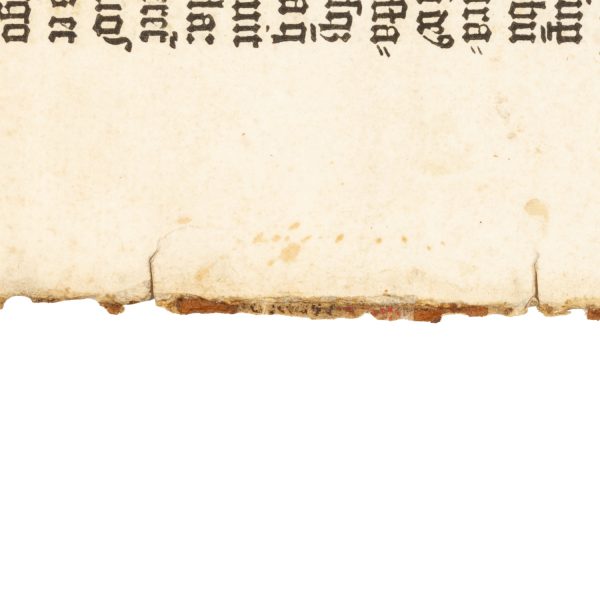 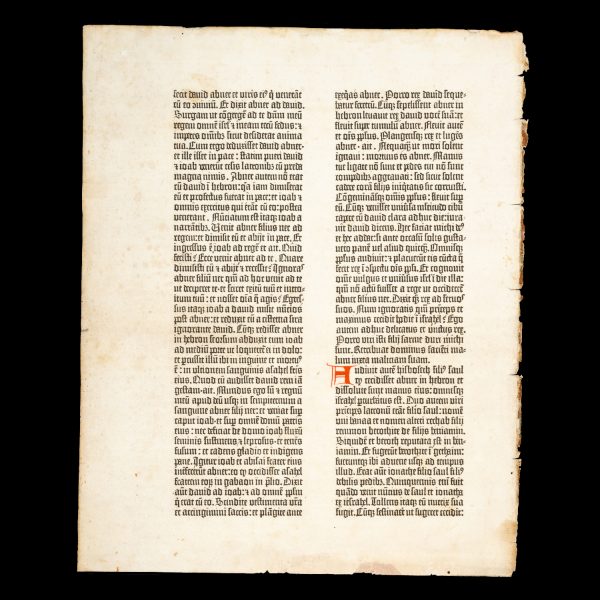 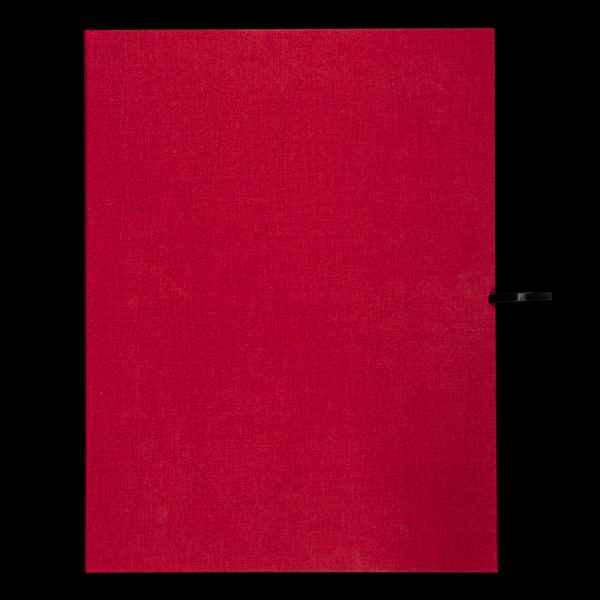 A leaf from the Gutenberg Bible

A LEAF FROM THE FIRST WESTERN BOOK PRINTED BY MOVABLE TYPE, THE GUTENBERG BIBLE.

“[The Gutenberg Bible] has never been surpassed. Of all the arts, printing at its birth reached perfection more nearly than any other.”

The Gutenberg Bible is perhaps the most famous and important book in the world, due to its being the first complete book printed in Western culture using the radical technology of movable pieces of type. The introduction of this form of printing ushered in an information revolution whose impacts – both direct and indirect – on literacy, education, humanism and, ultimately, democracy, were incalculable.

As the first of all first editions, the Gutenberg Bible represents in some sense the “holy grail” of early printed books. Complete examples are now unprocurable in the marketplace (all being held in public collections); yet a single leaf, extracted from an incomplete copy of the Bible, captivates the imagination when one contemplates the permanent significance this revolution of the Renaissance had for all humanity.

“Its printers were competing in the market hitherto supplied by the producers of high-class manuscripts. The design of the book and the layout of the book were therefore based on the book-hand and manuscript design of the day, and a very high standard of press-work was required – and obtained – to enable the new mechanical product to compete successfully with its hand-produced rivals. Standards were set in quality of paper and blackness of ink, in design and professional skill, which the printers of later generations have found difficult to maintain.” (Printing and the Mind of Man).

Only forty-eight copies of the Gutenberg Bible are known to have survived, of which twenty-one are complete.

The Gutenberg Bible is the Vulgate – the Latin version of the Hebrew Old Testament and the Greek New Testament that is largely based on the translations made by Saint Jerome in the late 4th and early 5th century.

The main content of the present fragment comprises II Sam. 3: 1-39. The text chiefly concerns Abner, the first cousin of the Israelite king, Saul, and commander-in-chief of his army. The pro-Davidic writer of II Samuel states in the first verse of this chapter: ‘The war between the house of Saul and the house of David lasted a long time. David grew stronger and stronger, while the house of Saul grew weaker and weaker’ (II Sam. 3:1).

At this point Abner has a falling out with Saul’s son, Ish-bosheth, and goes over to David’s side. The enmity has arisen because of Abner’s sexual relationship with one of Saul’s concubines, Rizpah daughter of Aiah. ‘And Ish-bosheth said to Abner, “Why did you sleep with my father’s concubine?” Abner was very angry because of what Ish-bosheth said and he answered, “Am I a dog’s head that belongs to Judah? This very day I am loyal to the house of your father Saul and to his family and friends. I have not handed you over to David. Yet now you accuse me of an offense involving this woman!”‘

Ish-bosheth’s accusation against Abner goes beyond mere criticism of an act of moral impropriety: its implications are far more profound, as sexual intercourse with the king’s concubine was tantamount to a usurpation of royal authority. In spite of protesting his loyalty to the house of Saul, Abner immediately proclaims David the rightful king in God’s eyes and determines to make him king ‘from Dan to Beersheba’ (II Sam. 3:10).

Abner then goes to David in Hebron and pledges the tribe of Benjamin’s loyalty. He also obeys David’s command to bring with him Michal, the daughter of Saul and wife of Palti, son of Laish, who had once been David’s first love and wife. David then sends Abner to gain the support of other northern tribes. On Abner’s return to Hebron, however, he is murdered by Joab and Abishai, who in carrying out this act avenge the death of their brother Asahel, slain by Abner in the battle at Gibeon. Abner’s burial takes place in Hebron. David publicly declares himself innocent of the crime and laments for Abner with a psalm (II Sam. 3:33-34).

The Mons – Trier II copy, widely dispersed in fragments from the sixteenth to twentieth centuries.

Trier, probably the Benedictines of St. Maximin, before 1569 (?)

Removed, along with four quires, from the folio now residing at the Bibliothèque centrale, Mons, Belgium, most likely in the early nineteenth century (a related leaf with a presentation inscription dated 1812)

Ferdinand Reiber (1849 – 1892), Strasbourg, entomologist and bibliophile, who added his small collection stamp to the lower margin (now removed). In 1877, Reiber purchased a small island in the river Ill, renaming it L’île Gutenberg in honour of Gutenberg who began his experiments with movable type nearby.

We are grateful to Dr. Eric White, Scheide Librarian and Assistant University Librarian for Special Collections, Rare Books and Manuscripts, Princeton University Library, for his assistance in tracing the provenance of this leaf.