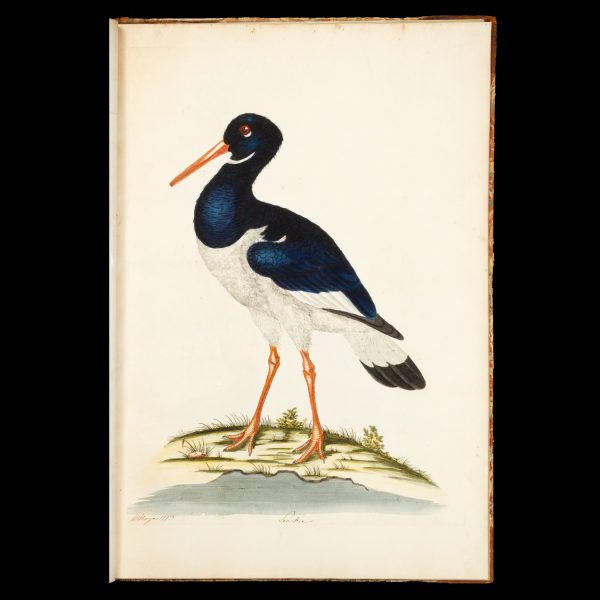 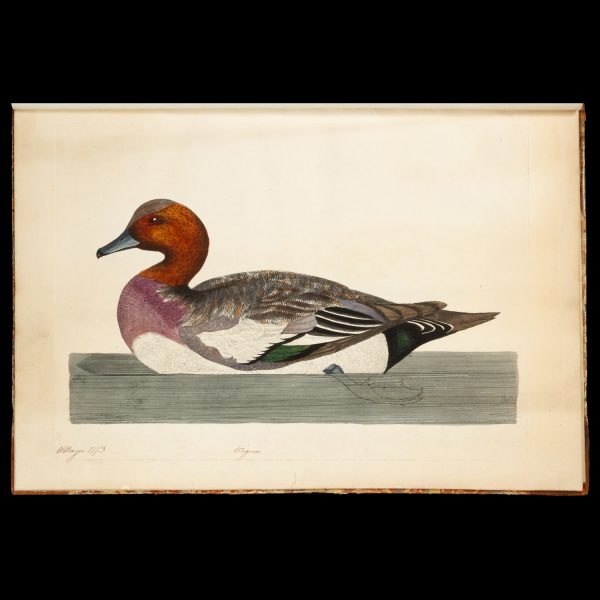 A natural history of British birds.

London : the author, [1771-1779]. Two volumes, folio, contemporary half calf over marbled boards (edges rubbed), no title page (as issued), 40 proof plates hand coloured by Hayes and his family, all but seven signed, captioned and dated; the Green Woodpecker has the signature of William Hayes and Gabriel Smith; a few spots but otherwise the plates in fine, crisp condition; very scarce.

William Hayes was an early English bird artist, who for much of his life also worked as a postmaster. He had a large family, was often in financial difficulties, and was helped with the colouring of his plates by his daughters. The content of his handsome folio work Natural History of British birds, with their portraits, accurately drawn and beautifully coloured from Nature 1771-1775 was not constrained by its title: Hayes produced a number of copies with foreign birds such as pheasants and parrots, since copies were made to order – a fact which also explains the erratic nature of this publication, in terms of the paper quality, number of plates and subject matter.

“Almost every copy of a William Hayes book is different – plates, colourists, artist, so if you list the plates in each copy/vol. there is no guarantee you will find another with plates done by the same member of the Hayes family – certainly not coloured by one only. But, I think an early copy of the Natural History of British Birds will have William Hayes and Gabriel Smith’s work only – perhaps! I once saw a 1st edition of this title at Sotheby’s. They had not spotted the Gabriel Smith signatures, or did not mention it. Some plates were very lightly (under-etched) etched, others so heavily etched (left in the bath too long) that it had been difficult to float the watercolours over the lines. This copy must have been a very early one, while Hayes was still learning to etch, guided by Gabriel Smith who showed him how to do it on 8 plates that he signed. Gabriel Smith was convicted of forgery and hanged in 1783 (see my Dictionary of Bird artists of the World). In the New Oxford National Dictionary, the author of the Hayes entry did not know about my Bird etchings and his article is faulty. This is not very helpful, I know, but if you were not a learned and experienced gentleman I would hint to you not to tangle collating William Hayes if you wish to remain calm and collected.” (Christine Jackson, copy of correspondence dated 18 July 2017).