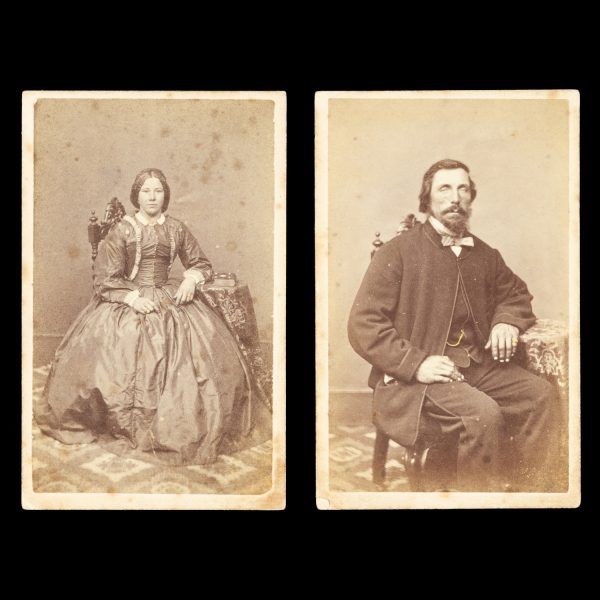 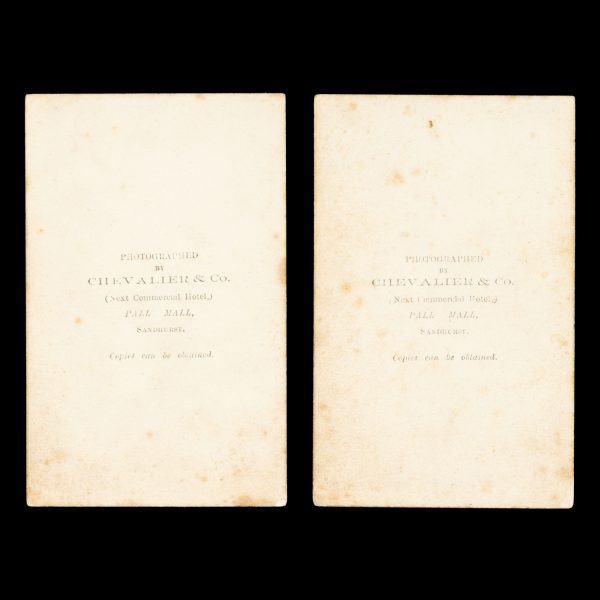 A pair of studio portraits of a husband and wife. Bendigo, Victorian goldfields, circa 1865.

Two albumen print photographs in identical carte de visite format, 101 x 64 mm (mounts); versos imprinted ‘Photographed by Chevalier & Co., (Next Commercial Hotel), Pall Mall, Sandhurst’; both prints have beautiful tones and excellent clarity; the portrait of the woman has some mottling in the negative, and both mounts have some very light foxing.

The pair was sourced together, having originally been window-mounted side-by-side in the same family album. It is quite possible that they were taken by Chevalier during the same visit to his Pall Mall studio by a husband and wife.

‘Thomas Chevalier … professional photographer … was prominent among Sandhurst (Bendigo) photographers before 1870. He had a studio called Chevalier’s Photographic Portrait Gallery in Pall Mall from 1865 to 1868, at one time advertising: ‘Mr. Chevalier in returning thanks for past patronage, begs to inform his customers and the public in general, that he has the best lighted rooms in the colony. The sky and side lights afford a soft and beautiful light, which enables the sitter to obtain a life-like portrait’. He offered a variety of portrait styles, regardless of weather, and sold imported frames and cases. An advertisement of 1865 offering copies of cartes-de-visite taken by him over the preceding four years suggests that he had been working in the area since about 1861.

Although primarily a studio photographer, Chevalier also produced photographs of early business premises and public buildings in and around Sandhurst. For a time he had a branch establishment at nearby Eaglehawk and was briefly a hotel-keeper there. Little is known of his movements after setting up a studio in Smith Street, Fitzroy, Melbourne, between 1877 and 1882…’

Chevalier did not close his Fitzroy studio until 1888. Curiously, on his wife’s probate (1890) his occupation is recorded as “builder”. Chevalier died at his residence Oakhampton House, Michael Street, Fitzroy, in 1898, leaving a considerable estate.