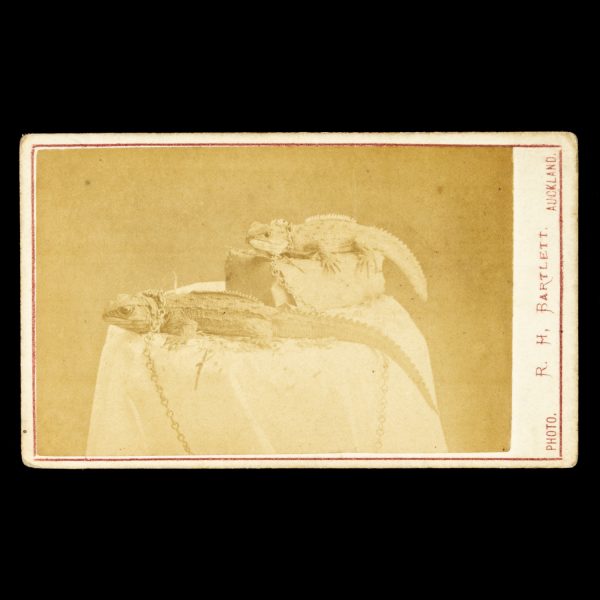 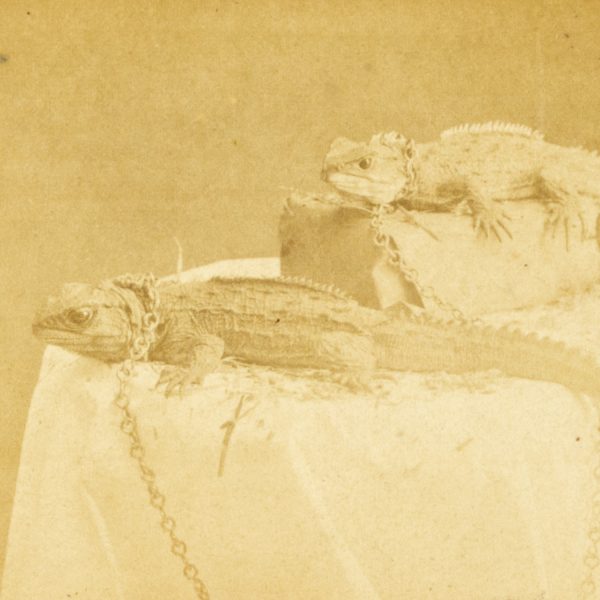 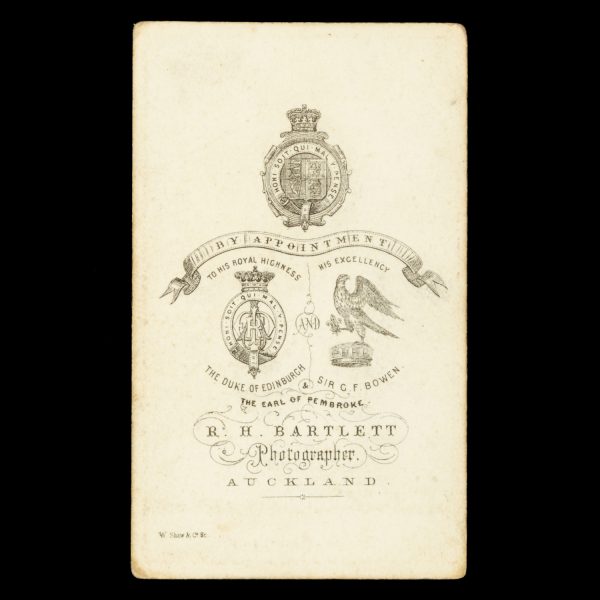 An extraodinary portrait of two living tuatara, chained to a table. Taken in the Auckland studio of Richard Bartlett in the early 1870s, this must surely be the earliest recorded photograph of this unique reptile. Found only in New Zealand, the tuatara is the sole surviving member of the order Rhynchocephalia, and is accordingly regarded as a “living fossil” from the Middle Triassic period.

It is likely that the two living specimens depicted in this carte de visite were collected by the New Zealand naturalist Sir Walter Buller (1838-1906), who is known to have supplied the British Museum with a considerable number of taxidermied tuatara for scientific research. The compiler of the photograph album from which this particular carte de visite came was a member of the Sperry family. The Sperrys were clearly friends of the Bullers, as the album also contained private portraits of Buller and one of his daughters, as well as another of Buller at the funeral of explorer David Livingstone in London. These cartes – including that of the tuatara – were quite possibly sent to the Sperrys by a member of the Buller family.

The only other example of this carte de visite we can trace is held in the collection of the Auckland Museum.

The approximate dating of Bartlett’s photograph is based on the advertisement incorporated into his studio back mark: it probably dates to no later than the last year of Sir George Bowen’s term as Governor of New Zealand (1873) and no earlier than the Earl of Pembroke’s visit to New Zealand (1870).

Provenance: from a family photograph album compiled by a female member of the family of John Sperry (1829-1890), Lands Commissioner, who was the father of New Zealand artist Eleanor Kate Sperry (1862-1893).

‘Tuatara are reptiles endemic to New Zealand. Although resembling most lizards, they are part of a distinct lineage, the order Rhynchocephalia. Their name derives from the Māori language, and means “peaks on the back”. The single species of tuatara is the sole surviving member of its order, which originated in the Triassic period around 240 million years ago and which flourished during the Mesozoic era. Their most recent common ancestor with any other extant group is with the squamates (lizards and snakes). For this reason, tuatara are of interest in the study of the evolution of lizards and snakes, and for the reconstruction of the appearance and habits of the earliest diapsids, a group of amniote tetrapods that also includes dinosaurs, birds, and crocodilians.

Tuatara are greenish brown and grey, and measure up to 80 cm (31 in) from head to tail-tip and weigh up to 1.3 kg (2.9 lb) with a spiny crest along the back, especially pronounced in males. They have two rows of teeth in the upper jaw overlapping one row on the lower jaw, which is unique among living species. They are also unusual in having a pronounced photoreceptive eye, the third eye, which is thought to be involved in setting circadian and seasonal cycles. They are able to hear, although no external ear is present, and have unique features in their skeleton, some of them apparently evolutionarily retained from fish. Tuatara are sometimes referred to as “living fossils”, which has generated significant scientific debate. While mapping its genome, researchers have discovered that the species has between 5 and 6 billion base pairs of DNA sequence, nearly twice that of humans. The tuatara (Sphenodon punctatus) has been protected by law since 1895. A second species, the Brothers Island tuatara (S. guntheri, Buller, 1877), was recognised in 1989, but since 2009 it has been reclassified as a subspecies (S. p. guntheri). Tuatara, like many of New Zealand’s native animals, are threatened by habitat loss and introduced predators, such as the Polynesian rat (Rattus exulans). Tuatara were extinct on the mainland, with the remaining populations confined to 32 offshore islands until the first North Island release into the heavily fenced and monitored Karori Sanctuary in 2005.

During routine maintenance work at Karori Sanctuary in late 2008, a tuatara nest was uncovered, with a hatchling found the following autumn. This is thought to be the first case of tuatara successfully breeding in the wild on New Zealand’s North Island in over 200 years.’ (Wikipedia)