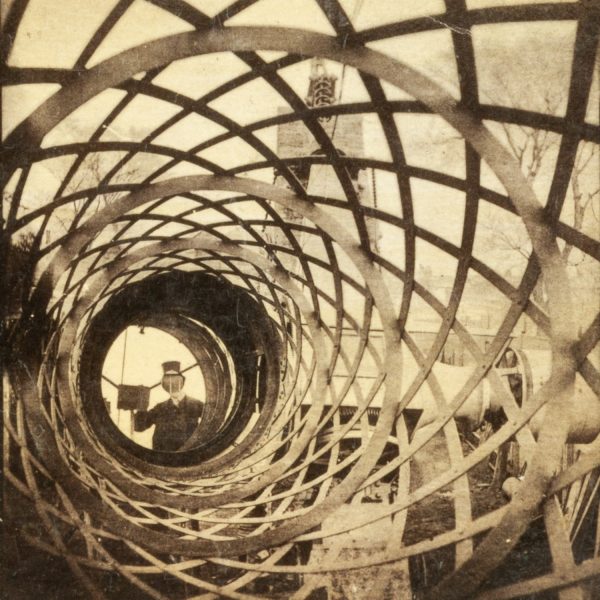 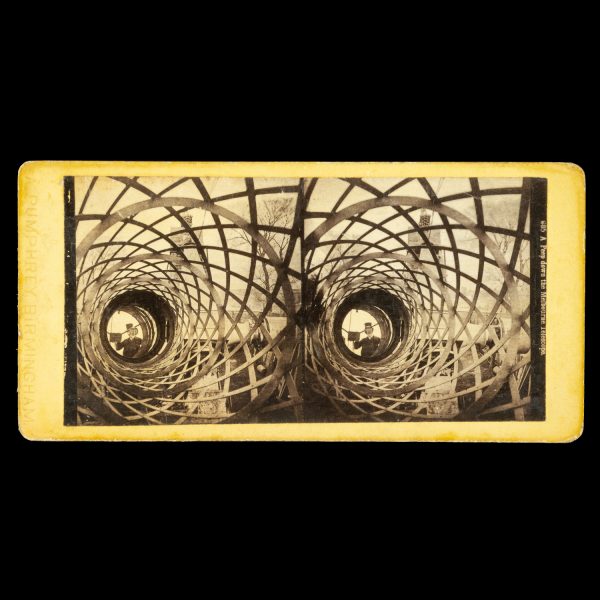 A Peep down the Melbourne Telescope.

[Title from printed caption in negative]. Circa 1870. Stereoscopic silver albumen print photographs, each individual image 68 x 72 mm, on yellow board mount 83 x 166 mm, with the publisher’s serial number and caption in the negative at far right edge ‘685. A Peep down the Melbourne Telescope’, recto of mount with publisher’s imprint at left edge ‘A. Pumphrey, Birmingham’, verso with faint wet stamp of the same publisher; both the prints (which appear slightly different as they were taken a few seconds apart) are in fine condition; the mount is clean and stable.

This rare and important early stereoscopic view of the Great Melbourne Telescope appears unrecorded in Australian public collections. The top-hatted gentleman partially obscured at the far end of the telescope is almost certainly the astronomer Albert Le Sueur, its first Observer (1869-70). The photographer is, unfortunately, unidentified, but the image – particularly when viewed in 3-D – is a true artistic achievement that dramatically succeeds in capturing the complexity of what was arguably the most advanced piece of scientific technology in the southern hemisphere at the time.

‘The Great Melbourne Telescope was an important icon for nineteenth-century Melbourne, signifying a transition from a colonial outpost to a progressive city with an interest in science and astronomy. The telescope is now being restored to its original 1869 condition, as a fully functional observational telescope, to be returned to Melbourne Observatory in the Domain for public viewing.’ (Scienceworks, Museums Victoria, 2020)

‘The Great Melbourne Telescope (GMT) was built by Thomas Grubb of Dublin in 1868 and erected at Melbourne Observatory in 1869. It was a reflecting telescope with a speculum (metal) mirror of 48 inches (1.2 metres) diameter. At the time it was the second largest telescope in the world and the largest in the southern hemisphere. The design and construction was overseen by a committee of eminent British astronomers, which approved Thomas Grubb’s revolutionary design. Although incorporating many of Grubb’s earlier innovations, the telescope was on a larger scale than anything he had previously attempted. Grubb’s firm went on to make many of the major telescopes around the world in the second half of the 19th century. The telescope was operated at Melbourne Observatory by a Great Melbourne Telescope Observer: Albert Le Sueur (1869-70), E. Farie MacGeorge (1870-72), Joseph Turner (1873-83), and Pietro Baracchi (1883-92); thereafter it was used rarely.’ (https://greatmelbournetelescope.org.au/history/#:~:text=Grubb’s%20firm%20went%20on%20to,1869%2D70)%2C%20E.)