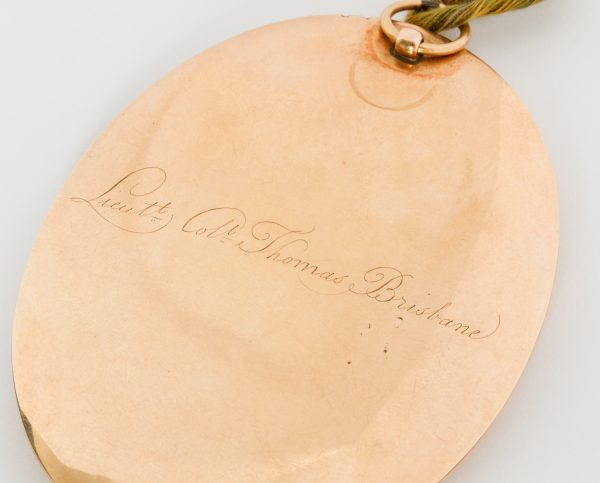 A fine portrait of a distinguished administrator whose political and social legacies were of immense importance in the shaping of the Colony of New South Wales. Portraits of such significant early Australian figures are of the utmost rarity.

Sir Thomas Makdougall Brisbane (1773-1860), colonial governor and astronomer, was born into an aristocratic Scottish family. After attending the University of Edinburgh and the English Academy, Kensington, he entered the army in 1789, with the commission of ensign in the 38th Regiment. Promoted to the rank of captain and then major, he served in Flanders and the West Indies between 1793 and 1799. He was subsequently made lieutenant-colonel in command of the 69th Regiment in Jamaica, where he served from 1800 to 1803. Invalided on half-pay, he spent the years 1803-1805 in England, and it was almost certainly during this period that the present miniature was painted. In 1810 he rose to colonel and was also elected a fellow of the Royal Society on the strength of studies in the field of astronomy he had undertaken in Edinburgh. In 1812 he achieved the rank of brigadier-general; he received a K.C.B. in 1815 and a K.C.H. in 1817. On the recommendation of the Duke of Wellington, Brisbane was appointed to succeed Macquarie as Governor of New South Wales in November 1820. He arrived in Sydney to take up his post in December 1821.

Although the main tasks which faced him as Governor were related to addressing issues that had arisen from Commissioner Bigge’s report – primarily the regulation of land ownership and security – Brisbane was able to appoint additional surveyors, with the result that the limits of the Colony were extended considerably. In 1823 John Oxley explored the region around Moreton Bay and named the Brisbane River after the Governor; in the following year a penal colony was established at Moreton Bay on Brisbane’s orders.

Aside from the expansion of the Colony and the creation of new settlements, Brisbane’s achievements included the establishment of a Legislative Council; the introduction of trial by jury; the easing of government control of the press, which allowed for the first independent newspaper, Wentworth’s Australian; stamping out abuses in the system of hired convict labour; the encouragement, as first patron of the New South Wales Agricultural Society, of experimentation with new crops such as tobacco, cotton and flax; and the building of an observatory in the grounds of Government House at Parramatta. At this time Van Diemen’s Land was still under the Governor’s jurisdiction, and Brisbane managed to maintain successful relationships with the successive lieutenant-governors William Sorell and George Arthur.

Brisbane’s liberalism was generally well received by the emancipists, but not by the so-called exclusives – the free settlers who comprised the majority of the leading colonists. The exclusives perceived Brisbane as a threat to their privileged position in the Colony. Indeed, the Governor’s recall in 1825 was due in large part to the lobbying of a group of prominent exclusives, among them the Macarthurs, Samuel Marsden and John Dunmore Lang, who had applied political pressure against Brisbane through their complaints made in London about his policies. Brisbane’s inability to work with his Colonial Secretary, Frederick Goulburn, also contributed to his recall.

Immediately prior to Brisbane’s departure from Sydney on 1 December 1825, the Civil Officers of the colony commissioned Augustus Earle to execute a portrait of him ‘as a monument of the progress of the Fine Arts under the present Administration’. This portrait, now in Government House, Sydney, is considered to be Australia’s first officially commissioned portrait.

Nathaniel Plimer (1757-1822) was one of the pre-eminent English miniaturists of his day. He studied under the regency era painter Richard Cosway, and exhibited at the Royal Academy between 1787 and 1815 and at the Society of Artists in 1790-1791. Plimer lived most of his life in London, apart from about a decade (1804-1814) in Edinburgh. In London, he worked from 31 Maddox Street. Like his brother Andrew, Nathaniel stopped signing his work after 1789 (D. Foskett, Miniatures Dictionary and Guide, 1987, p.620).