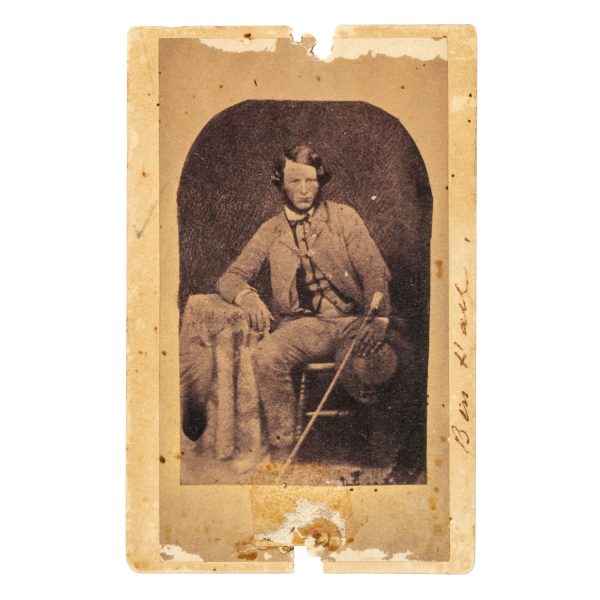 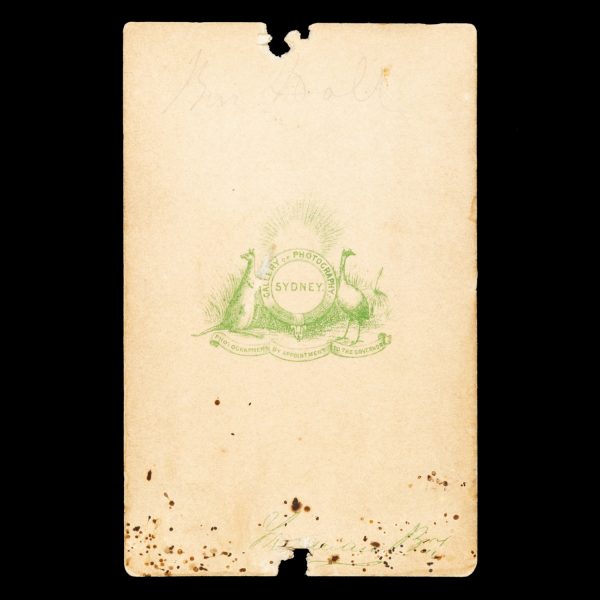 A portrait photograph of the bushranger Ben Hall.

Albumen copy print (made around 1865) of an ambrotype (taken around 1863), carte de visite format, 99 x 64 mm (mount); recto inscribed in ink in right margin ‘Ben Hall’; verso with pictorial back mark in green of the Freeman Brothers Gallery of Photography, Sydney, and above it another early caption in pencil ‘Ben Hall’; the central section of the print – the entire ambrotype portrait image – is clear and well preserved; the mount has insect damage at top and bottom edges, extending a short way into the upper and lower margins of the print, and partially obscuring the words ‘Freeman Bros.’ at the foot of the studio imprint verso (we have included an image of a complete Freeman Brothers back mark, in red, for comparison).

This highly significant portrait photograph of the bushranger Ben Hall (1837-1865) is a near-contemporary paper copy print of an ambrotype. The whereabouts of the original ambrotype, taken in an unidentified studio around 1863, is unknown. This print would have been made posthumously, probably in the months immediately following Hall’s death at the hands of mounted police at Goobang Creek, near Forbes, New South Wales, on 5 May 1865. The copy was made by Freeman Brothers, Sydney, certainly not after 1867 (see Davies & Stanbury, The Mechanical Eye in Australia, p. 164, for the dates of Freeman Brothers’ various business partnerships).

Despite the fact that he is one of the most prominent figures in Australian folklore, celebrated in song, print and film, there is only one surviving fully contemporary photograph of Ben Hall: a hand-coloured ambrotype by an unknown photographer dating to around 1861, originally held by Hall’s brother, William Hall, and now in the Justice & Police Museum (Historic Houses Trust of NSW), Sydney (JP1910/412). It has been widely reproduced in a variety of modified states, and is the most famous image of the bushranger, dandily dressed in smart jacket and waistcoat in the manner of a prosperous grazier. The ambrotype is damaged due to the loss of some of its emulsion, but the aspirational aspect of Hall’s character shines through.

Ambrotypes – positive photographs on glass made by a variant of the wet plate collodion process – are unique. However, an ambrotype image can of course be re-photographed and printed on paper. A near-contemporary carte de visite-format copy print by Freeman Brothers, Sydney, taken from a second Ben Hall ambrotype dating to around 1863 (whereabouts unknown), is held in the State Library of New South Wales (Call no. P1 / 693). It is a head-and-shoulders portrait that shows Hall’s facial features in more detail than the HHT ambrotype. Hall is sporting a sparsely-whiskered chin strap beard, and wears a light-coloured jacket and rakish necktie.

We offer here a near-contemporary carte de visite-format copy print of a third ambrotype of Ben Hall. Like the SLNSW example, it was made in Sydney by Freeman Brothers, and – as is also the case with the SLNSW print – the fate of the original ambrotype from which it was taken is unknown. In this portrait, the pose adopted by Ben Hall is virtually a lateral reversal of his pose in the HHT ambrotype. He is seated, relaxed, with his right forearm resting on a textile-covered studio table. In his left hand he holds his soft hat, and his riding crop rests at a jaunty angle against his thigh. Only the top button of his jacket is done up, revealing a dark-coloured waistcoat with a contrasting border down both sides of its front. The sitter is unmistakably the bushranger Ben Hall: the distinctive frown – with one eye squinting slightly – the aquiline nose, and “Cupid’s bow” upper lip are all facial features that are clearly evident in the SLNSW Freeman Brothers copy print.

‘Ben Hall (1837-1865), bushranger, is believed to have been born on 9 May 1837 at Maitland, New South Wales, son of Benjamin Hall and his wife Elizabeth; both parents were ex-convicts. He became a stockman and with John Macguire leased a run, Sandy Creek, near Wheogo. On 29 February 1856 at Bathurst he married according to Roman Catholic rites Bridget Walsh of Wheogo. Her sister became Frank Gardiner’s mistress. On the orders of Sir Frederick Pottinger, Hall was arrested in April 1862 at a race meeting for armed robbery but was acquitted. By then his wife had left him taking their infant son Henry. In July he was detained for his share in the Eugowra gold escort robbery. He was not committed for trial. Escalating legal costs probably forced Hall and Macguire to quit the lease of Sandy Creek. On 14 March 1863 Hall’s home was burnt down by Pottinger. Embittered, Hall joined John Gilbert and became leader of a gang of bushrangers.

Hall was probably the most efficient of the bushranger leaders. His men were well armed and superbly mounted, often on stolen race-horses which easily outpaced the police nags. Some of their holdups seem designed only to defy the police: on their daredevil raid on Bathurst in October 1863 they took little loot and at Canowindra they offered food, drink and festivity to all for three days, but drank little themselves and left the town empty-handed. On 24 October in a raid on Henry Keightley’s homestead at Dunn’s Plains Micky Burke was shot. Hall prevented John Vane from shooting Keightley in revenge and accepted the £500 ransom procured by Mrs Keightley. Vane surrendered and in November John O’Meally was shot. While Gilbert visited Victoria, Hall was joined by ‘The Old Man’ (James Mount) and Dunleavy, neither of whom lasted long. Gilbert returned and John Dunn joined the gang. In 1864 they concentrated on the Sydney-Melbourne Road south of Goulburn. On 15 November they held the road near Jugiong and robbed some sixty travellers; while holding up the Gundagai-Yass mail Gilbert shot Sergeant Parry. On 27 January 1865 Constable Nelson was shot at Collector by Dunn. Under the Felons Apprehension Act, passed in April, individuals could be proclaimed outlaws, whom any person was permitted to shoot without warning; proclamations declaring Hall and his companions outlaws were to be gazetted on 10 May. Their only safety was to keep on the move. Hall with £1000 on his head decided to quit but was betrayed by an informer. On 5 May he was ambushed and shot by the police near Goobang Creek on the Lachlan plain. His body, riddled with gunshot wounds, was buried in the cemetery at Forbes. His funeral was ‘rather numerously attended’ for his reckless courage, courtesy to women, humour and hatred of informers had won him a sympathy not shared by his more bloodthirsty colleagues.’