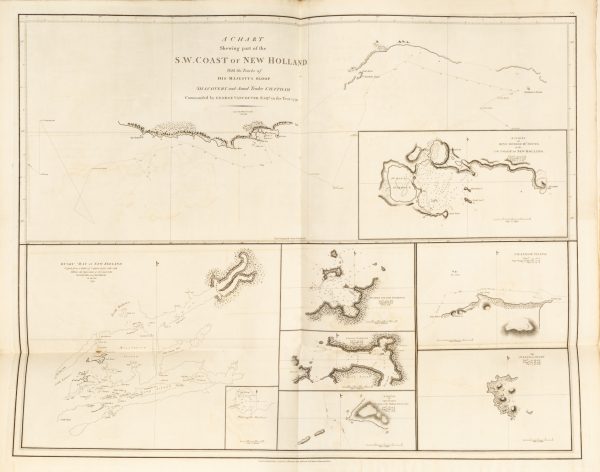 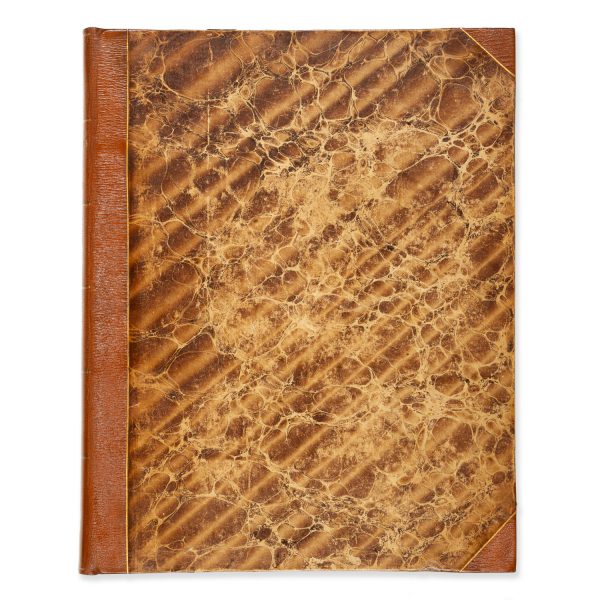 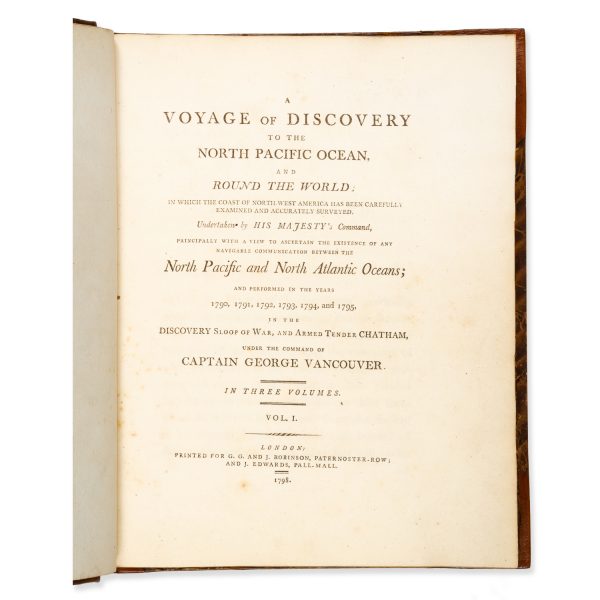 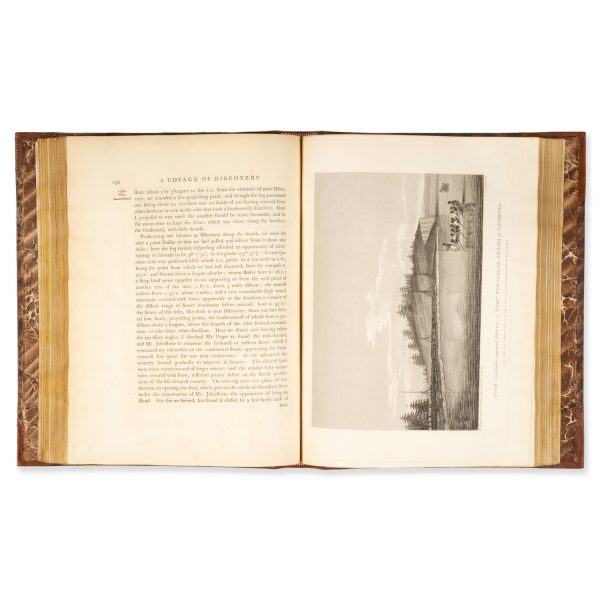 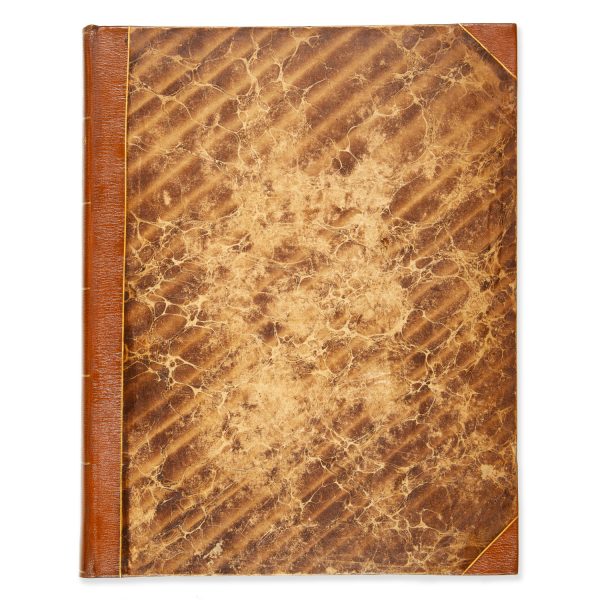 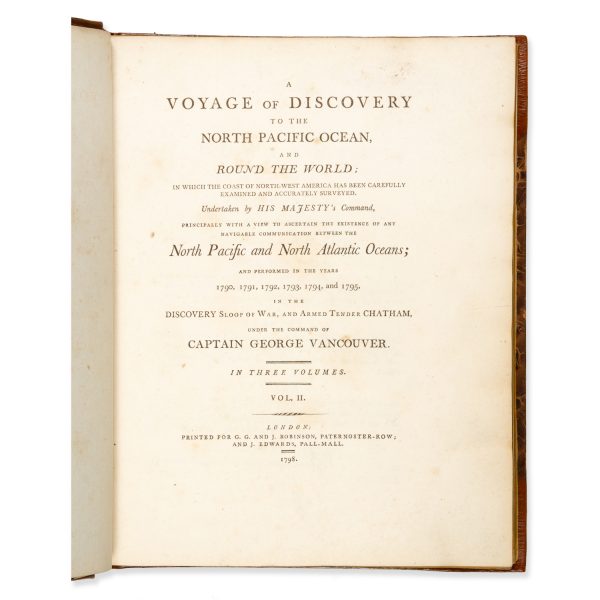 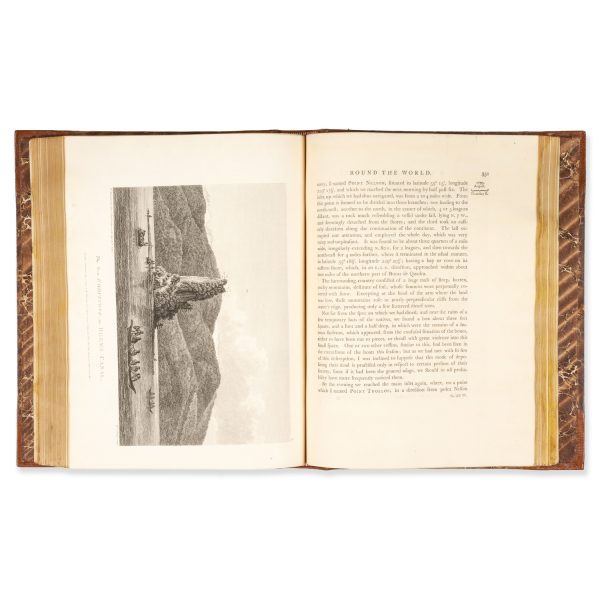 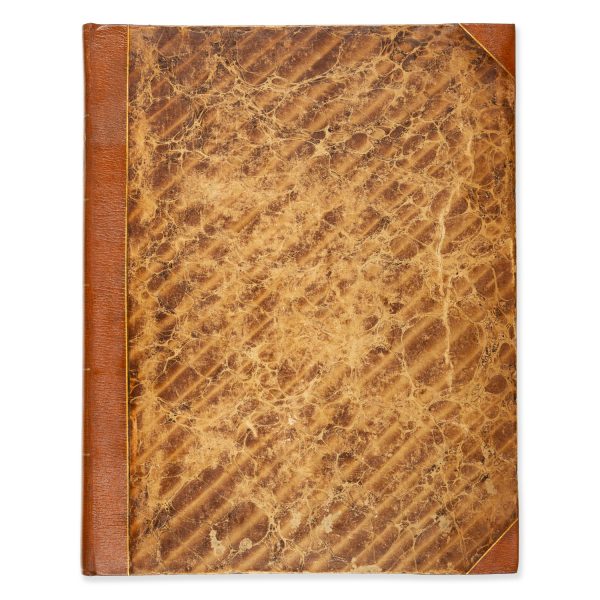 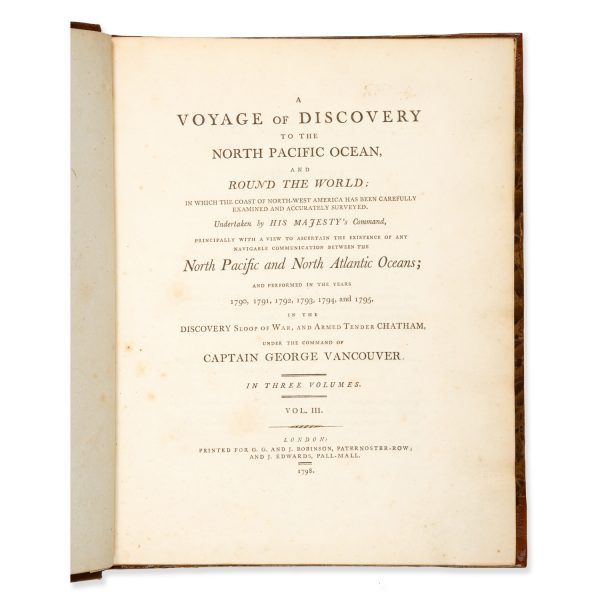 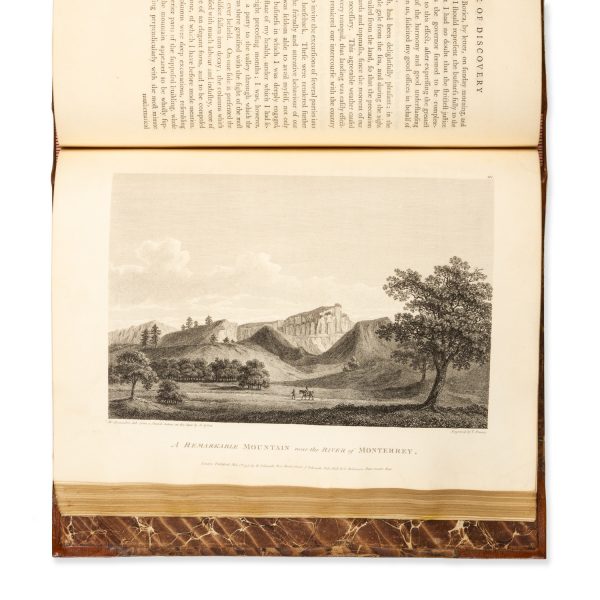 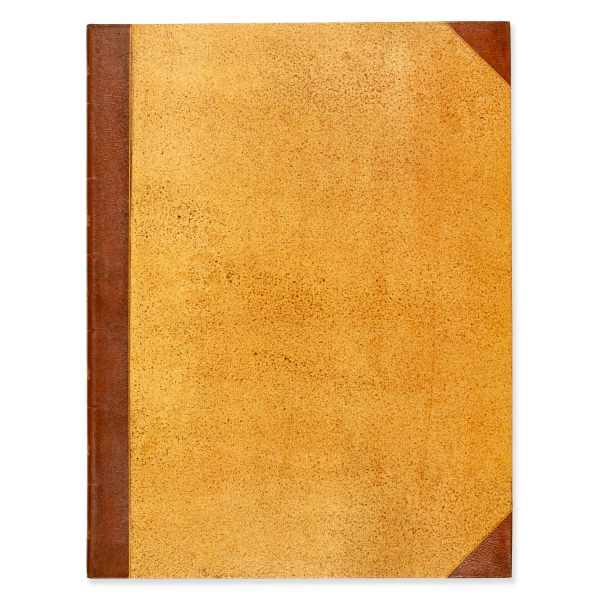 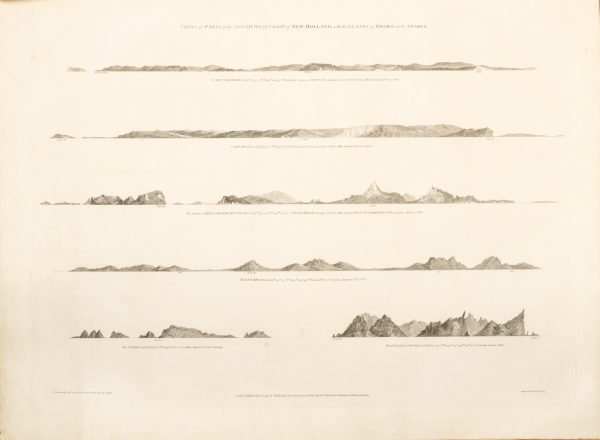 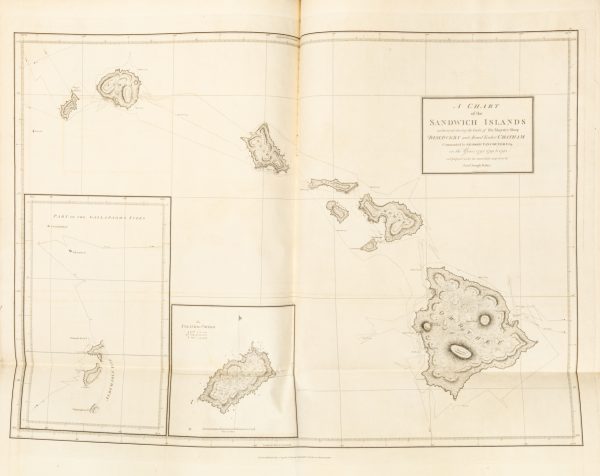 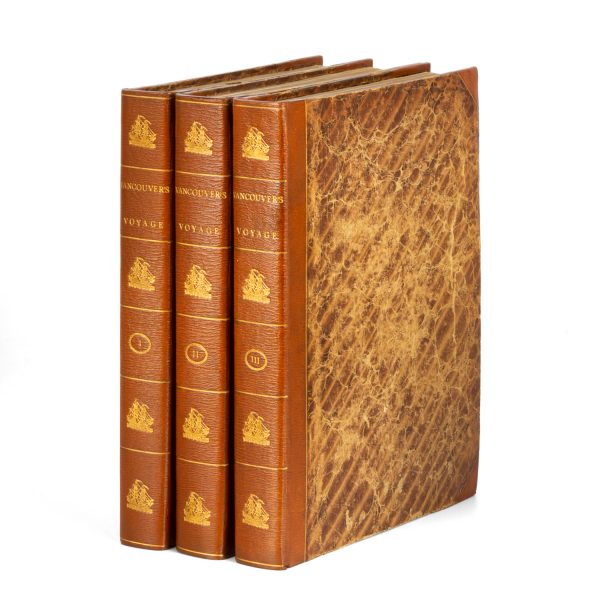 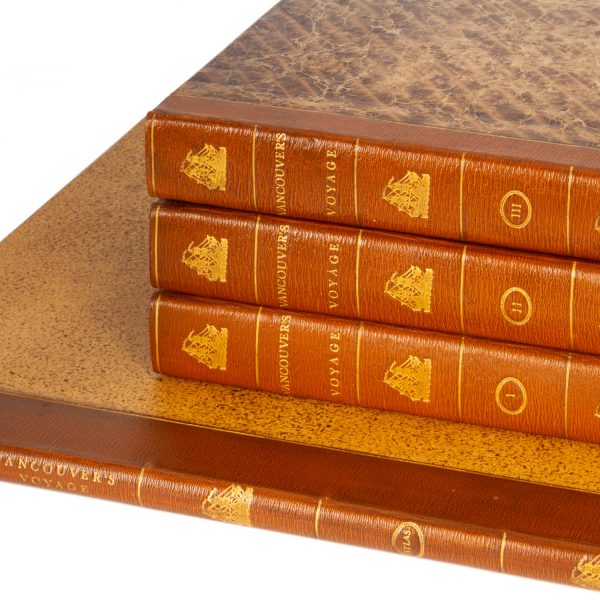 A Voyage of Discovery to the North Pacific Ocean, and round the world;

in which the coast of North-West America has been carefully examined and accurately surveyed. Undertaken by his Majesty’s command principally with a view to ascertain the existence of any navigable communication between the North Pacific and North Atlantic Oceans; and performed in the year 1790, 1791, 1792, 1793, 1794 and 1795, in the Discovery sloop of war, and armed tender Chatham, under the command of Captain George Vancouver. In three volumes. London : printed for G.G. & J. Robinson and J. Edwards, London, 1798. Three volumes, quarto, and one atlas folio. Three volumes quarto, half crushed morocco over marbled papered boards, flat panelled spines lettered in gilt with gilt ornaments, marbled endpapers, vol. I: pp. [xii]; xxix; [blank]; [ii; Advertisement from the Editor]; 432; 7 engraved plates, vol II: pp. [viii]; 504; 5 engraved plates (including one chart), vol III: pp. [viii]; 505; (3 – errata), 6 engraved plates; atlas folio contains 10 folding charts and 6 profile coastline views, mounted on stubs. A fine set.

‘Vancouver … had served earlier with both Admiral Rodney and on James Cook’s second and third voyages, so was well equipped in terms of experience, in addition he was a first class navigator. The voyage was mounted as a grand-scale expedition to reclaim Britain’s rights, resulting from the Nootka Convention, at Nootka Sound, to thoroughly examine the coast south of 60¼ in order to find a possible passage to the Atlantic; and to learn what establishments had been founded by other powers. This voyage became one of the most important ever made in the interests of geographical knowledge. Vancouver sailed by way of the Cape of Good Hope to Australia, where he discovered King George’s Sound and Cape Hood, then to New Zealand, Hawaii, and the northwest coast of America. In three seasons’ work Vancouver surveyed the coast of California; visited San Francisco and San Diego … and other Spanish settlements in Alta California; settled the necessary formalities with the Spanish at Nootka; investigated the Strait of Juan de Fuca; discovered the Strait of Georgia; circumnavigated Vancouver Island; and disproved the existence of any passage between the Pacific and Hudson Bay.’ (Hill, Pacific Voyages, 2004, p.623)

In terms of the history of European exploration of the southwest of the Australian continent, Vancouver’s voyage was highly significant. From the ADB:

‘Vancouver had been given permission to examine “that extent of coast of the south-west side of New Holland, which in the present age appears a real blot in geography”. He planned “to fall in with the S.W. Cape of New Holland, and should I find the shores capable of being navigated without much hazard to range its coast and determine whether it and Van Diemen’s Land are joined, which from all information at present extant appears somewhat doubtful”. On 26 September [1791] he sighted land near Cape Leeuwin and, sailing south-east, named Capes Chatham and Howe. Two days later the ships entered a spacious harbour which he named King George the Third’s Sound. Vancouver also named Oyster Bay and other features, claiming them for Great Britain. He reported on the terrain, animal life and the native inhabitants, and planted watercress, vines, almonds, oranges, lemons and pumpkins ‘for the benefit of future visitors’. On 11 October the ships journeyed east, surveying some 300 miles (483 km) of coast, “in which space we saw no other haven or place of security for shipping than the Sound before mentioned” and, in the westernmost part of the Recherche Archipelago, reached a rocky island which Vancouver called Termination Island.

Adverse winds prevented him from examining the Great Australian Bight, and relinquishing “with great reluctance” this “favourite project”, he sailed south of Van Diemen’s Land. The two ships were separated; off the southern tip of New Zealand Vancouver encountered “7 craggy islands” which he named The Snares, and the Chatham discovered and named Chatham Island. Further east in the Pacific he made detailed surveys of the Tahitian and Hawaiian (Sandwich) Islands and the vast and complex north-west coast of America from a point near San Francisco to the Alaskan Peninsula, most of the work being done in open boats. On his voyage Vancouver checked earlier charts, including some by Cook, correcting them with modesty and without disparagement. At Nootka he met the Spanish representative, Don Juan Quadra, but they could not agree in interpreting their separate instructions so decided without acrimony to refer the dispute over territory to their governments.’