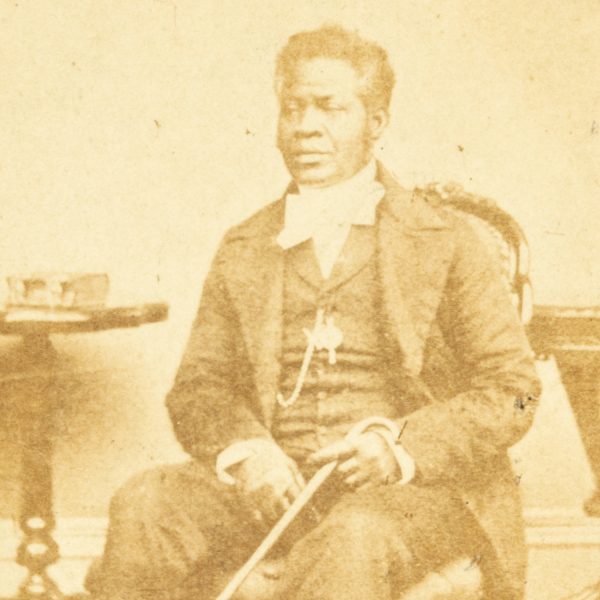 [Southampton, U.K.? : photographer unidentified, circa 1870]. Albumen print photograph, carte de visite format, 102 x 62 mm (mount); verso with an ink inscription, probably contemporaneous with the portrait, ‘Harry Ulusiboo, for 50 years servant to Henry Hayne Esq., who bought and “freed” him at Rio about 1817’, and with a small mounted albumen print of a religious engraving showing a young Christian boy at prayer; the portrait of Ulusiboo is in good condition; the mount is clean and stable, although the corners are a little softened.

Duke University (the William R. Perkins Library) holds the diaries of Henry Hayne, British diplomat, for the period 1797-1828. Hayne served as Lord Amherst’s private secretary and was the secretary on the Amherst Embassy to China, 1816-1817. In 1819 Hayne was appointed Commissary judge of the British Mixed English and Portuguese Commission newly established in Rio de Janeiro, a post which he held until 1833. It was probably soon after his arrival in Rio (around 1820) that Hayne bought and “freed” Harry Ulusiboo; Hayne’s diary record would doubtless confirm this. The date of 1817 in the inscription on the back of this carte de visite is slightly in error – understandably so, considering it was written half a century after the event.

One of Hayne’s diplomatic objectives in Rio was to agitate against slave trafficking and to apply British pressure on the Portuguese that would eventually lead to the abolition of the Portuguese slave trade, a circumstance that in turn would inevitably give rise to a new social class of liberated Africans. On his return to England in 1833 the British government asked Hayne to draw up new regulations that could be included in future treaties so as to ensure both the proper treatment of the freed slaves and their eventual freedom. Hayne’s Draft of regulations for the apprenticing, as well as care and protection of emancipated slaves of 1834 included many suggestions which ultimately found their way into the Treaty for the Suppression of the Traffick in Slaves. This treaty, signed by the representatives of Portugal and Great Britain in 1842, was the final outcome of a protracted series of diplomatic negotations and minor anti-slave trade treaties between the two nations.

HENRY FOX . I am waiter at Wood’s Hotel, Furnival’s Inn, Holborn. About half-past five o’clock, on the afternoon of the 17th of July, I was in the coffee-room, and observed the prisoner waiting outside the hotel door—Host sight of him for about a quarter of an hour—I went to look for him, but could not find him, and I put the alarm-bell on the hotel door, which rings when any one comes in or goes out—I afterwards heard the bell ring, and saw the prisoner leaving the door with a bundle under his arm—I followed him to No. 11 in the inn—I asked who he had been to see in the hotel—he said, “Mr. Reynolds”—we had a gentleman of that name in the hotel—I told him to follow me, and I would show him to Mr. Reynolds—I took him to him, and asked if he expected any clothes from the tailors—he said he did not, and he did not know the prisoner—I then brought the prisoner out of the room, and made him untie the bundle—it contained the articles stated, belonging to Mr. Hayne, of Southampton, who had come to the hotel that day—he claimed them—the hotel is in the parish of St. Andrew, Holborn.

Cross-examined by MR. PRENDERGAST. Q. It is in the county of Middlesex, is it not? A. Yes—Mr. Hayne is not here—the prisoner told Mr. Reynolds he had brought some clothes for. him, and he said he did not expect any—the prisoner did not then say it was a mistake—I brought him out of the room immediately—I did not hear him say a person he had seen in the inn had told him to take the clothes to Mr. Reynolds—he said he had been told by some person to take them.

HENRY ULUSIBOO . I am servant to Mr. Henry Hayne—he was lodging at Wood’s hotel on the 17th of July—this dressing-case is his—I have packed it up many times, and also this shawl and coat—every thing here is his.

Cross-examined. Q. Has your master any other name besides Henry? A. No—I have known his name for these twenty years.

WILLIAM WOOD . My hotel is in Furnival’s Inn, in the county of Middlesex, in the parish of St. Andrew, Holborn.

WILLIAM FINN (City police-constable, No. 276.) Part of Furrnival’s Inn is in the City, and part in Middlesex—the hotel is in the county—I took the prisoner, and have produced the property—there is a 5l. note, three half-crowns, and ten shillings in the dressing-case.

Cross-examined. Q. Did you ask him any thing? A. No—he did not say he was quite innocent—I am sure of that.

EDWARD BULPIN (police-constable K 125.) I produce a certificate of the prisoner’s conviction from Mr. Clark’s office—I was a witness on the prisoner’s former trial—I am sure he is the person to whom this certificate applies—(read).

Cross-examined. Q. You apprehended him, I suppose? A. I did.