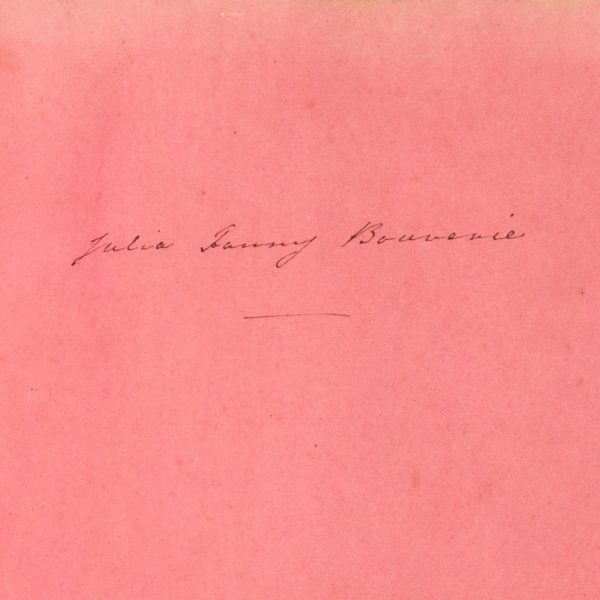 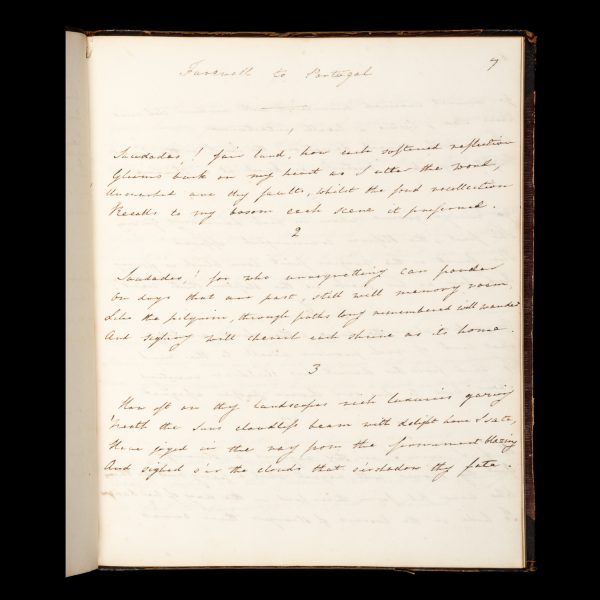 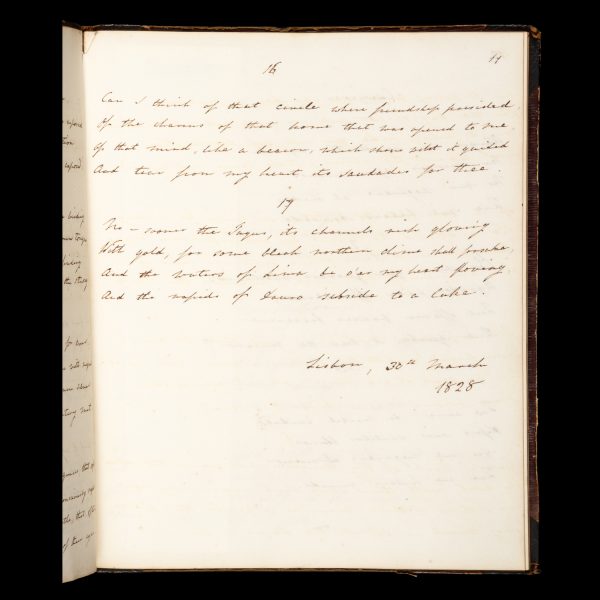 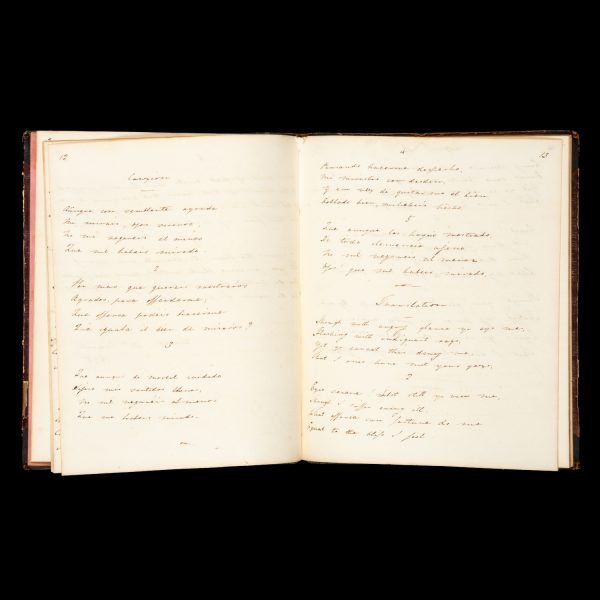 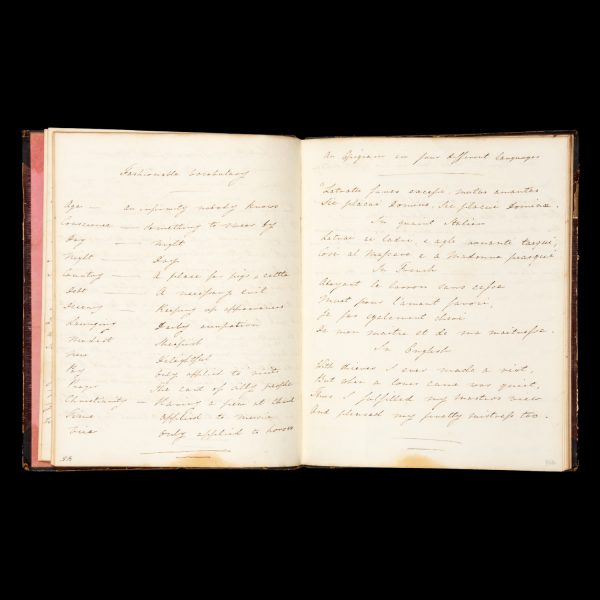 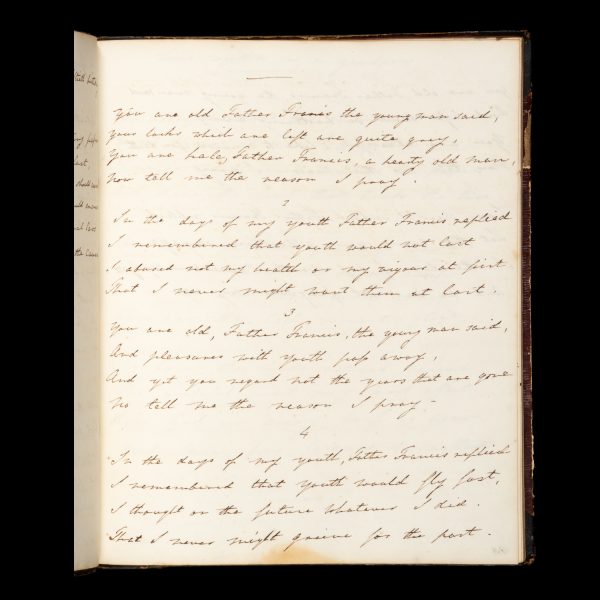 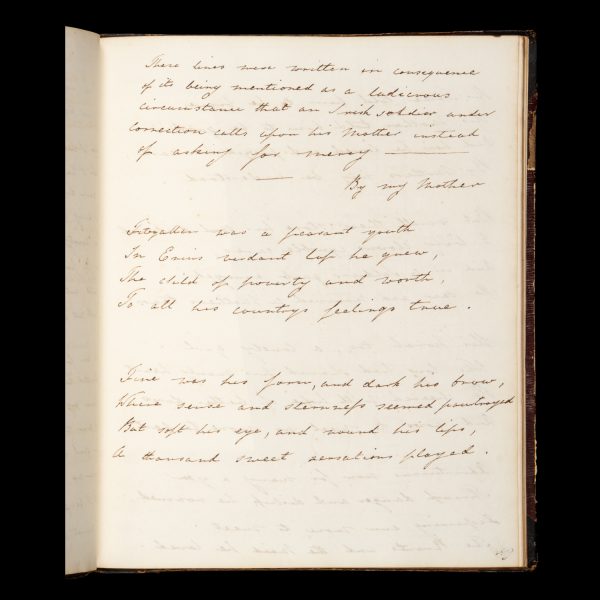 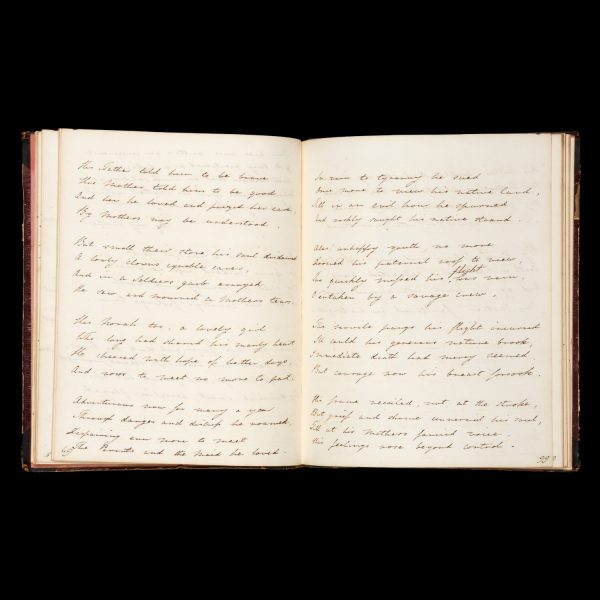 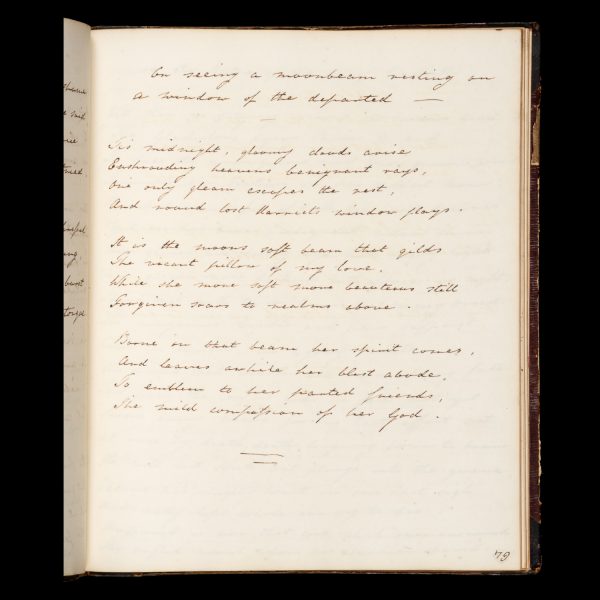 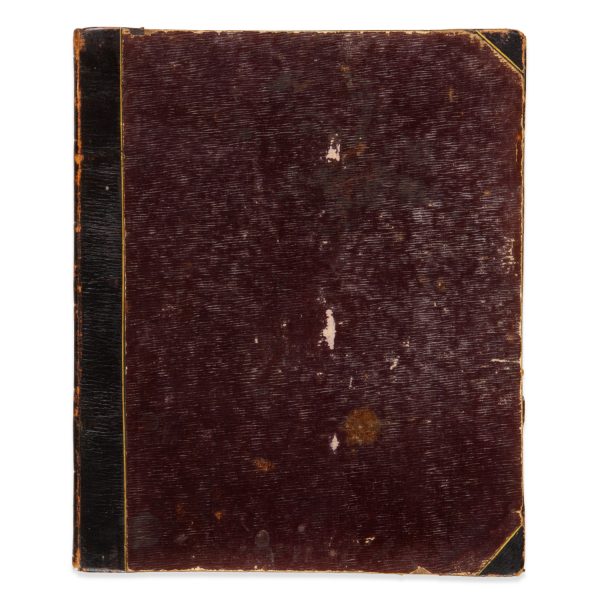 Small quarto album (225 x 190 mm), half straight-grain black morocco over gilt-ruled straight-grain burgundy morocco boards (rubbed and with light staining, both boards with remnants of old paper labels); all edges gilt; front free-endpaper with ownership signature of Julia Fanny Bouverie, [80] pages of manuscript in ink on unruled paper, ms. pagination at upper corners 1-16, 35-88, 91-100 (written tête-bêche from 100-35); the album was evidently kept by Bouverie during a sojourn in Portugal with her second husband, Lieutenant-General Sir Henry Frederick Bouverie, in the winter of 1827-28, and comprises a mixture of her original poetry (including Farewell to Portugal dated at Lisbon, 30 March 1828), verse translations from Portuguese, Latin and Italian, and copies of works by other writers (including her mother Maria Henrietta Montolieu: see below for summary of contents); written in a neat and legible hand; contents clean and free from foxing.

Unique album containing what is quite possibly the only surviving work of a hitherto unrecognised English female poet of the Regency period.

Julia Fanny Bouverie (née Montolieu, 1792-1836) came from a privileged and well-educated English family. As the daughter of Louis Montolieu de St. Hippolyte, F.S.A. (1761-1817), a partner in Hammersley’s Bank, Pall Mall, and Maria Henrietta Heywood (1765-1817), a published poet, she grew up in a household in which a predilection for literature or talent for writing would have been fostered. Julia’s mother, as Maria Henrietta Montolieu, published The enchanted plants. Fables in verse (London : printed by Thomas Bensley, 1801). Sir John Sloane’s Museum holds a copy inscribed by their mother for her two daughters, Julia and her sister Maria Georgiana. Maria Henrietta also published another slim volume of poetry, The Festival of the Rose (1802).

Julia’s first husband was Captain William Wilbraham, RN (1781-1824), whom she married in 1817. Together they had four children – William, Emily Anna, Julia Maria, and Louisa – before Captain Wilbraham’s early death in 1824. Julia remarried in July 1826, to Lieutenant-General Sir Henry Frederick Bouverie (1783-1852), who had served in Spain and Portugal in the Peninsular War as ADC and Military Secretary to Lord Wellington. (Bouverie was present at the battles of the Douro, Talavera, Salamanca, Vittoria, the Nive, and Orthes, and at the storming of San Sebastian, and received particular mention in both Sir Rowland Hill’s and the Marquis of Wellington’s despatches for his services at the battle of the Nive. He would later serve as Governor of Malta, 1836-1843).

In the winter of 1827-28 Henry returned to Portugal, this time accompanied by his wife Julia, probably to renew some old wartime friendships but undoubtedly also to revisit – in a time of peace – the beautiful landscape and architecture of the Iberian peninsula. As evidenced by some of her entries in the album she kept during her stay there, Portugal and its people made a strong and romantic impression on Julia.

In the years following their return to England, Julia and Henry had two children: Henry Montolieu Bouverie (1830-1854), who became a Captain in the Coldstream Guards and would be killed at the Battle of Inkerman; and Henrietta Bouverie (1832-1929), who married her cousin, Hugh Montolieu Hammersley (1825-1896), 5th Baron of St. Hippolyte. Julia died at the age of 44, in 1836; she was survived by all six of her children and by her second husband, who would die in 1852, the day before he was due to depart from his country seat, Woolbeding House, near Midhurst in Sussex, to take a prominent part in the Duke of Wellington’s funeral.

Summary of the album’s contents:

[pp 1-5]. Hymno Constitutional dos Povos de Algarve. In Portuguese. The entire lyric of the Hymno da Carta of the Algarve.

[pp 7-11]. Farewell to Portugal. Lisbon, 30th March, 1828. An original poem in 17 quatrains. “Saudades! fair land, how each softened reflection / Gleams back on my heart as I utter the word, / Unmarked are thy faults, whilst the fond recollection / Recalls to my bosom each scene it preferred … … Can I think of thy daughters’ mild graces, that soften / The heart, ‘neath their sway which unconsciously sighs / Can I think of their manners so gentle, that often / They rival in softness the glance of their eyes. / Can I think of that circle where friendship persisted, / Of the charms of that home that was opened to me, / Of that mind, like a beacon, which shone whilst it guided / And tear from my heart its saudades for thee. / No – sooner the Tagus, its channels rich glowing / With gold, for some bleak northern clime shall forsake, / And the waters of Lima be o’er my heart flowing, / And the rapids of Douro subside to a lake.”

[pp 12-14]. Cançion. In Portuguese. An anonymous, passionate love song in 5 quatrains; followed by Julia’s English translation. “Though with angry glance ye eye me / Flashing with indignant rays / Yet ye cannot this deny me / That I once have met your gaze … …”

[p 15]. Cartaxo. In English. The first line only of an original poem dedicated to the town of Cartaxo, near Santarém. (See below)

[pp 96-95]. Cartaxo. In English. An original poem in 5 quatrains; an ode to the town of Cartaxo. “See rising the hills, & the vallies descending / And the olives’ dark shade with the brighter tints blending / See the houses and spires, like snow from afar show, / For white are the houses & spires of Cartaxo … Such a wonderful place ne’er was seen by Munckhausen / Or e’er in his study imagined by Parson / Parry never discovered , nor could Dr. Parr show, / With all his great learning a place like Cartaxo … …”

[pp 88-87]. Lines on a slow footman. Anonymous poem published under the title Sauntering Joe; or, The slow footman, in The poetical note-book; and epigrammatic museum. Selected by G. Wentworth (London, 1824).

[p 84]. An Epigram in four different languages. An anonymous Latin distich which was in its original context an epitaph for a dog written by its appreciative owner; Julia has written out the original, followed by her own translations “In quaint Italian”, French and English. Her English version reads: “With thieves I ever made a riot, / But whena lover came was quiet, / Thus I fulfilled my master’s view / And pleased my pretty mistress too.”

[pp 82-81]. You are old Father Francis the young man said. An original poem in 6 quatrains; a meditation on age and the passing of time.

[p 78]. Epigram on a dog’s collar. Anonymous Italian epigram, followed by Julia’s own translation: “By fair and brown you’ll courted be / But [none] you’ll find so true as me.” / Epigram addressed to Lady Bouverie on hearing a friend complain of the heart burn. “That heart designed thy worth to bless / Gives joy and pain by turns, / For all his friends its warmth confess / Whilst he complains it burns.”

[p 76]. For the summer house at Wyddial. An original poem in 3 sestets; Julia’s ode to her family’s country residence in Hertfordshire. “Here Nature is the shore from the loud waves / Of the too busy too self-torturing world / And this sweet spot is one of the sweet caves / Whither the wrecked from that vexed ocean hurled / Might turn into, and find its blessedness / Sweetly repay him for long weariness … …”

[pp 74-73]. Parallel between a King and a Postillion. Paraphrased from Annual gleanings of wit and humour. By a celebrated wit of the age (London, 1816).

[pp 72-71]. Sayings. Eleven proverbs and bon mots, such as: “A pig may whistle though his mouth is not made for it.”; “Not neat but strong, as the devil said when he sewed up his wife’s mouth with a jack chain.”

[p 68-65]. A ballad (possibly unpublished?) in 12 quatrains by Julia’s mother, Maria Henrietta Montolieu. Julia prefaces it with these words: “These lines were written in consequence of its being mentioned as a ludicrous circumstance that an Irish soldier under correction calls upon his mother instead of asking for mercy. By my Mother.” The last stanza is: “By grief, fatigue and pain oppressed, / Death on his frame exhausted hung, / And as his heart with anguish burst, / My Mother! faltered on his tongue.”

[p 64]. On seeing a moonbeam resting on a window of the departed. An original poem in 3 quatrains. “… Borne on that beam her spirit comes, / And leaves awhile her blest abode, / To emblem to her parted friends, / The mild compassion of her God.”

[pp 58-54]. Verses by T. Sheridan addressed to G. Forbes whilst the latter was at Church.

[pp 50-47]. The Soul and the Body. Poem by John Frank Newton published in Three Enigmas attempted to be explained (London, 1821).