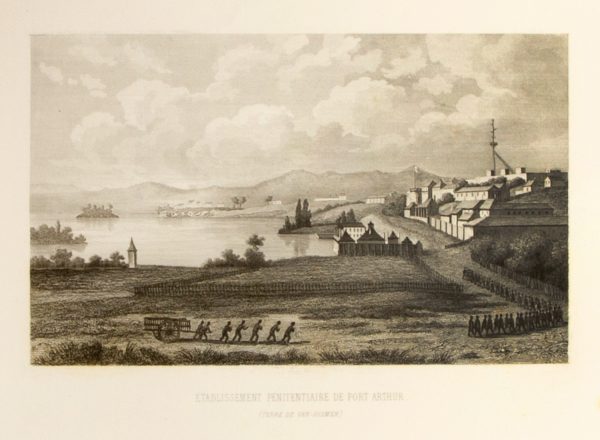 The circumnavigation by Admiral Paris in the Artémis took place between 1837 and 1840. The engravings from the original drawings include a chillingly grim view of the penal colony at Port Arthur (Van Diemen’s Land); the Artémis run aground at Papeete (Tahiti); and a view of Honolulu. The introductory text by Henricy places each engraving in the context of the route taken by the Artémis, which visited Sydney as well as Hobart. Other views include those of Rio de Janeiro, Macao, Calcutta, Muscat etc.

A luxurious large format reissue of the finely engraved illustrations originally published in the Laplace edition of 1841. Forbes writes: ‘This is a deluxe limited edition evidently assembled with the aid of Edmond Paris, who had become a distinguished admiral. Some authorities consider the plates better printed in this edition than in the Laplace text. It has always been a very difficult work to obtain and is found in surprisingly few collections of Pacific voyages’.