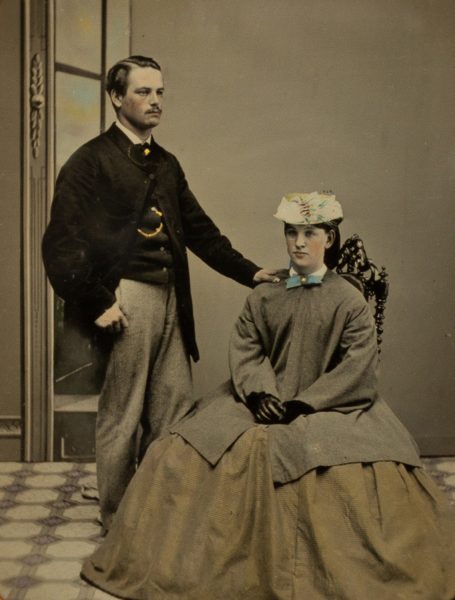 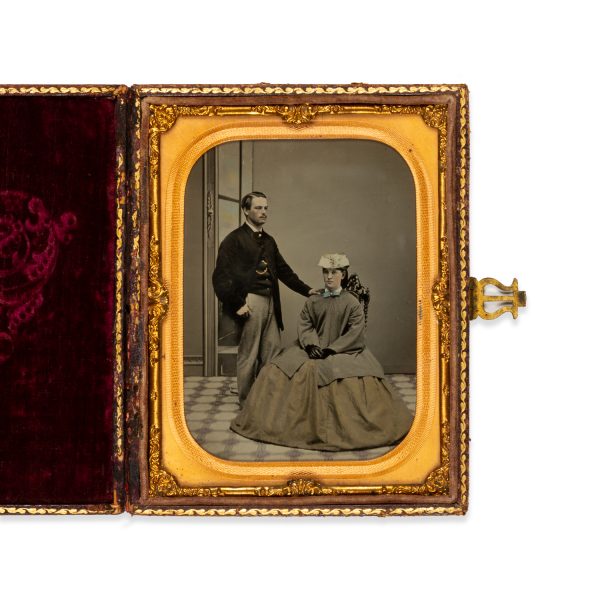 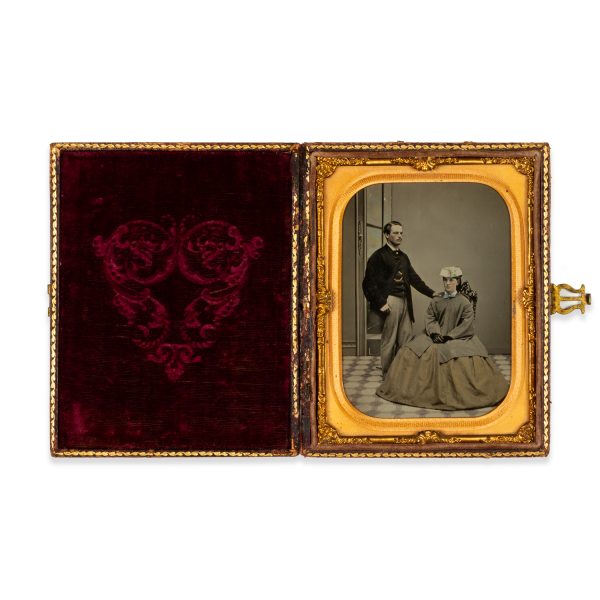 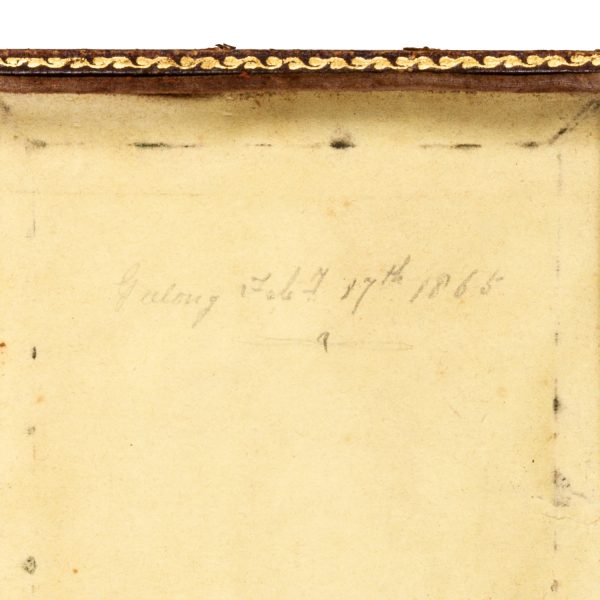 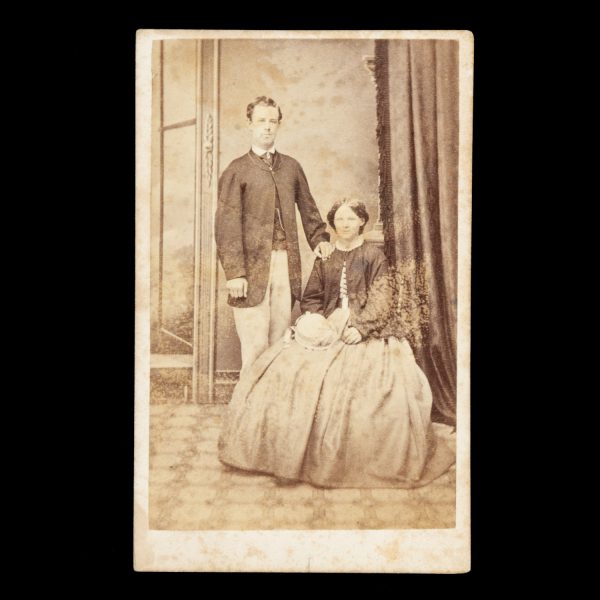 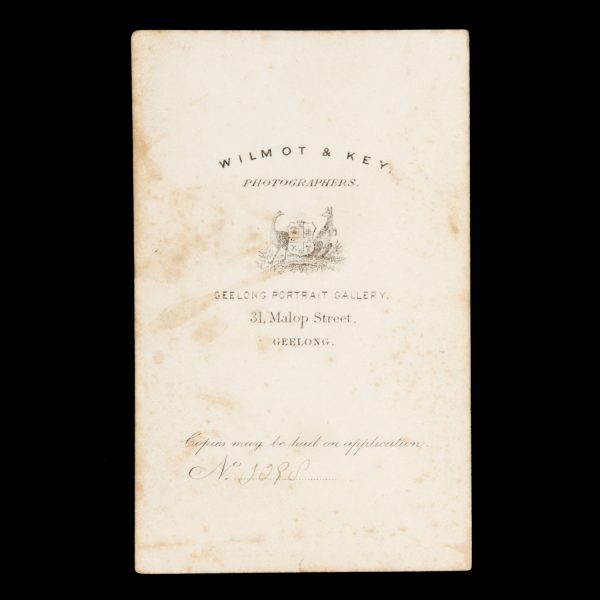 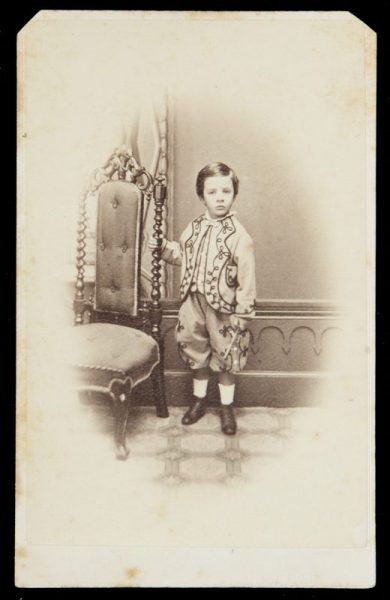 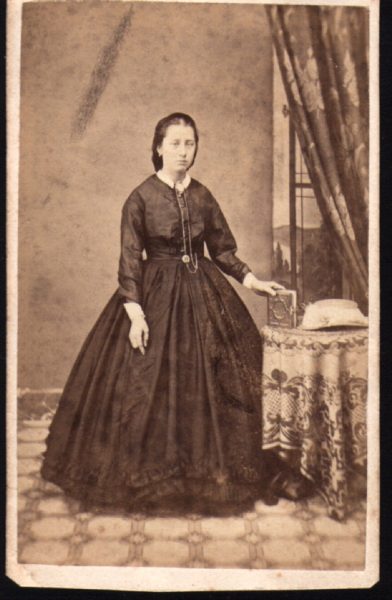 Quarter plate ambrotype with hand colouring, 90 x 64 mm (sight), housed in its original wooden-based leather case with embossed velvet lining, 117 x 93 mm, the case with floral and geometric designs and gilt borders to front and back (lightly rubbed), and with a working brass clasp; the ambrotype is still sealed beneath the original glass, with the original plain brass mat and ormulu preserver; the black emulsion to the reverse of the image is fully intact, resulting in an image of great clarity, in fine condition; a fully contemporary inscription in pencil on the papered lining of the case gives the location and date of the photograph: ‘Geelong, Feby. 17th 1865’; [together with] a Wilmot & Key (Geelong) carte de visite portrait of a different couple, showing the identical studio carpet and painted back drop.

We know with absolute certainty that this superb ambrotype portrait was taken in George Clarke Wilmot & William Key’s Geelong Portrait Gallery at 31 Malop Street West (and not in the studio of either Eugen de Balk or Joseph Turner), since it features the studio’s distinctively patterned carpet which is known from Wilmot & Key carte de visite portraits of the mid 1860s. The clinching evidence is provided by the Wilmot & Key carte de visite we have included with the ambrotype – a strikingly similar portrait of a young husband and wife. (The Wilmot & Key identification is further substantiated in two other cartes de visite, of which we have uploaded images: a portrait of a young George Ernest Morrison dated May 1867, and a portrait of Ellen Ashmore, probably taken slightly earlier, which also shows part of the same trompe-l’œil backdrop that we see in the left background of the ambrotype. The latter image is courtesy of the excellent Geelong and District website).

The following advertisement appeared in the Geelong Advertiser on 11 October 1864:

‘GEELONG PORTRAIT GALLERY, 31, GREAT MALOP-STREET, WEST, OPPOSITE “ADVERTISER” OFFICE, GEELONG.  WILMOT & KEY, (late with W. F. Roberts), RESPECTFULLY announce to their friends and the public that they have fitted up the above spacious premises with every care and convenience, and are enabled to produce Carte de Vislte Portraits,, &c, at greatly reduced prices. Carte de Visite Portraits 15s per dozen, 6 ditto 10s; 2 ditto 5s. Photography in every Style of the Art, Perfect satisfaction guaranteed.’

The studio was barely four months old when, in the late summer of 1864-65, the young husband and wife in this ambrotype paid a visit to have their likenesses taken in their finest attire. The carefully composed portrait – in which the photographer had both sitters gaze in opposite directions, away from the camera – has subtle and skilfully applied tinting. (Whether the colouring of photographs was Wilmot’s forte or Key’s is not clear). The young woman, seated, wears an olive green dress, a beautiful grey jacket tied with a sky-blue bow at the throat, black gloves, and a white summer hat adorned with flowers. Her rather dashing husband, who sports a fashionable moustache, stands solemnly with his arm resting on her shoulder. He wears a black frock coat and tie, against which the gold of his watch chain and tie pin stand out. The cheeks of both sitters have delicate rose tinting. The couple, although unidentified, were undoubtedly very prosperous and probably belonged to the Geelong or Western District social elite. They would have paid the studio around 15 shillings for this coloured ambrotype – and, as the photographers boasted, are guaranteed to have been perfectly satisfied with the splendid result.

Ambrotype photographs, created using the wet plate collodion process developed by the English inventor Frederick Scott Archer, came into vogue in Europe and North America from around 1854 as a cheaper alternative to the daguerreotype. They remained a commercially popular photographic process until the mid 1860s. A glass plate covered with a thin layer of collodion, then dipped in a silver nitrate solution, was exposed to the subject while still wet, then developed and fixed. When the reverse of this negative image was coated with a dark emulsion such as varnish or paint, the resulting image appeared as a positive. The process required the expertise and experience of a professional photographer. The ambrotype had reached the height of its popularity by the early 1860s, when it was superseded by the albumen print.

Cased images (both daguerreotypes and ambrotypes) by identified Australian photographers are exceedingly rare, and seldom appear on the market.