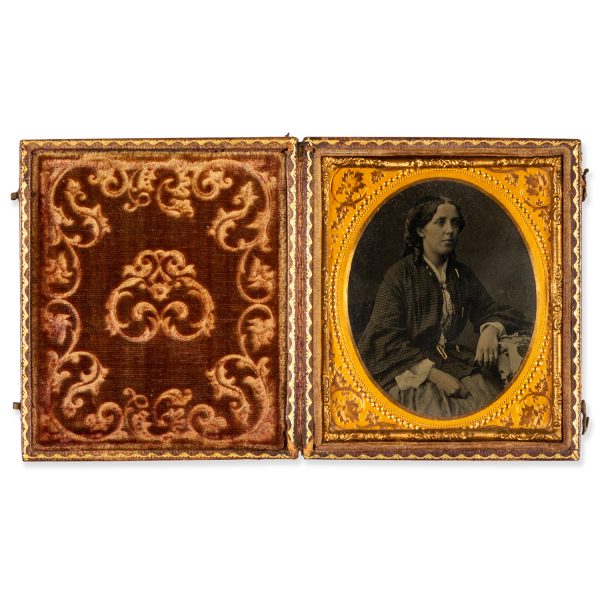 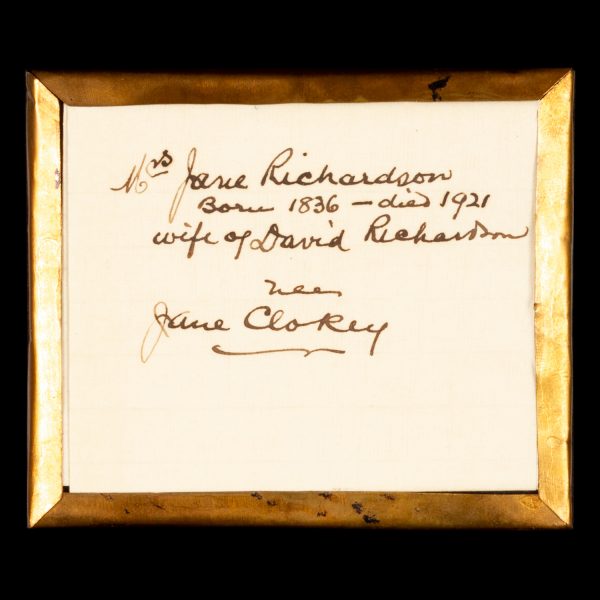 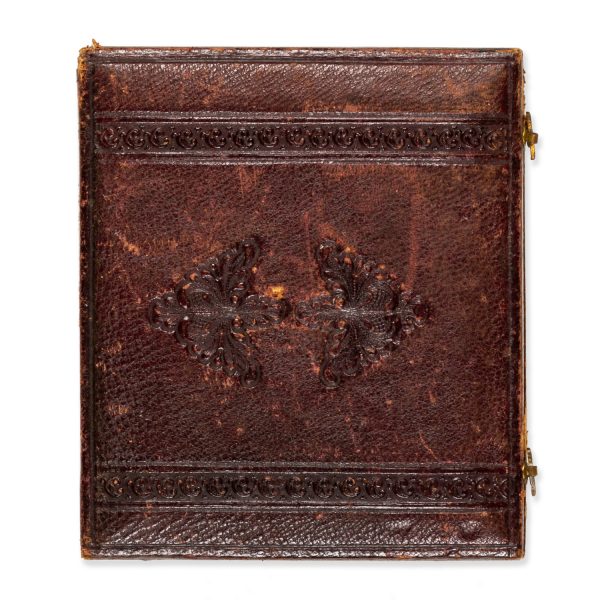 Ambrotype portrait of Jane Richardson (née Clokey), an Irish emigrant to New Zealand and later, Australia. Taken in Auckland, circa 1865.

Sixth plate ambrotype with hand colouring, 70 x 55 mm (sight), housed in its original wooden-based leather case with embossed velvet lining, 92 x 80 mm, the case with repeating floral motifs (rubbed), and with two working brass hook clasps; the ambrotype is still sealed beneath the original glass, in the original brass mat with acanthus designs, framed by the original ormulu preserver; the black emulsion to the reverse of the image is fully intact, resulting in an image with good detail and clarity; the sitter’s jewellery (including the chain for her reading glasses and, more significantly, her wedding ring) is highlighted in gold; lodged in the back of the casing is a piece of paper with an inscription in ink, probably written by a later family member around 1930, which identifies the sitter: ‘Mrs Jane Richardson / Born 1836 – died 1921 / wife of David Richardson / née Jane Clokey’.

Jane Clokey was born on 23 July 1836 in Great Grand Street, Dublin. In November 1862 she emigrated to New Zealand on board the Gertrude, arriving at Auckland from the port of London on 9 February 1863. On 4 May 1864 Jane married David Richardson, an engineer and architect residing in Wakefield Street, Auckland, at St Paul’s Church in that city. Based on the fact that Jane’s wedding ring is prominent in this ambrotype portrait, we surmise that the photograph was taken in an Auckland studio, probably around 1864-65, before the birth of Jane’s first child, Sidney, who was born in Auckland in 1866.

Jane and David had two children: Sidney Clokey Richardson (1866-1959) and Percy Robert Richardson (born in 1875). The Richardsons later settled in the town of Cambridge in the Waikato, where, in the 1880s, David served on the Town Board and also patented several new pieces of machinery for industrial use. According to a report in the Waikato Times on 24 May 1888, Sidney left Cambridge to settle in Melbourne early in that year. It appears that some time after this, David and Jane emigrated to Australia in order to live out their final years with their eldest son. They settled in the Melbourne suburb of Footscray: a notice in the Footscray Independent on 9 May 1914 announced their Golden Wedding anniversary.

David Richardson survived his wife by a few years, and died on 28 September 1926, also at Footscray.

Ambrotype photographs, created using the wet plate collodion process developed by the English inventor Frederick Scott Archer, came into vogue in Europe and North America from around 1854 as a cheaper alternative to the daguerreotype. They remained a commercially popular photographic process until the mid 1860s. A glass plate covered with a thin layer of collodion, then dipped in a silver nitrate solution, was exposed to the subject while still wet, then developed and fixed. When the reverse of this negative image was coated with a dark emulsion such as varnish or paint, the resulting image appeared as a positive. The process required the expertise and experience of a professional photographer. The ambrotype had reached the height of its popularity by the early 1860s, when it was superseded by the albumen print.

Cased images (both daguerreotypes and ambrotypes) by colonial Australian and New Zealand photographers, especially with identified subjects, are exceedingly rare.