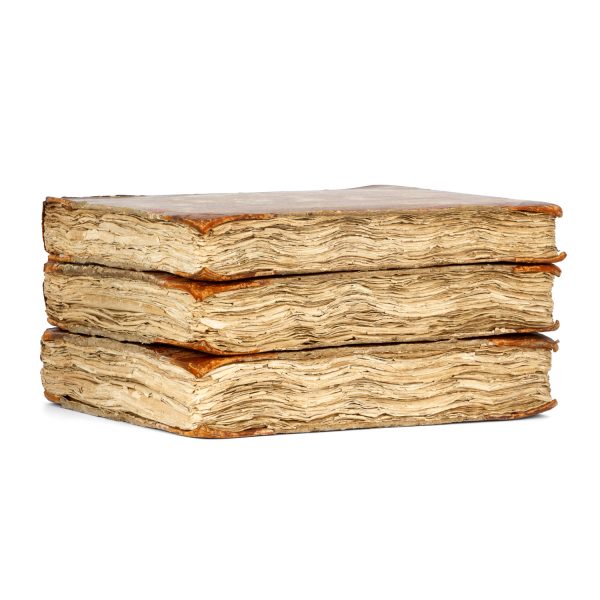 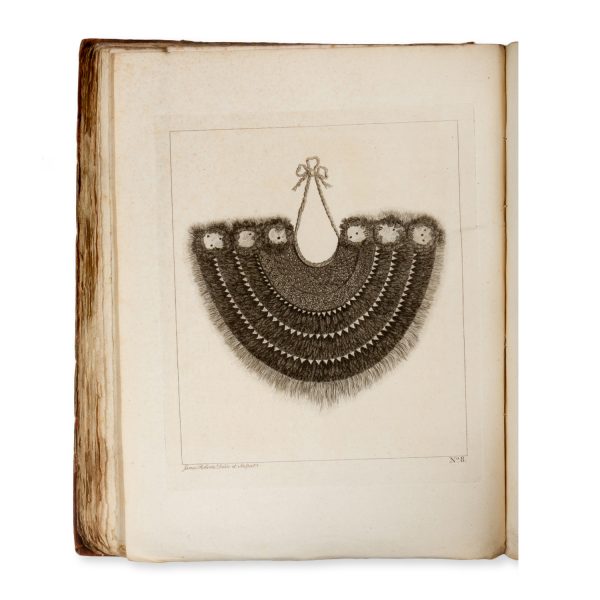 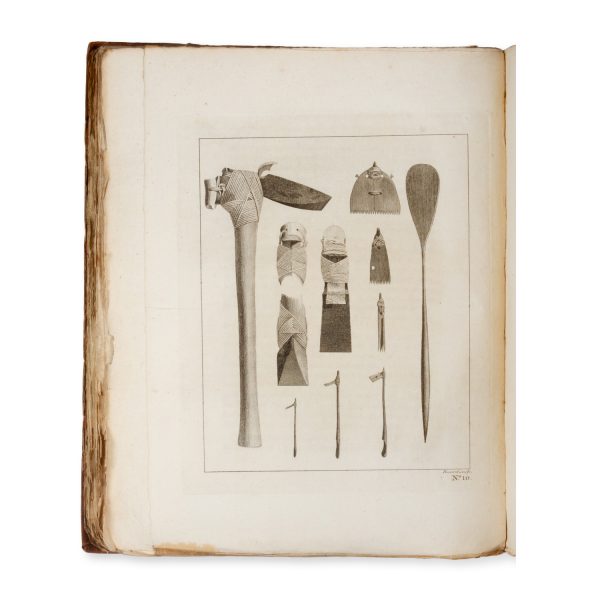 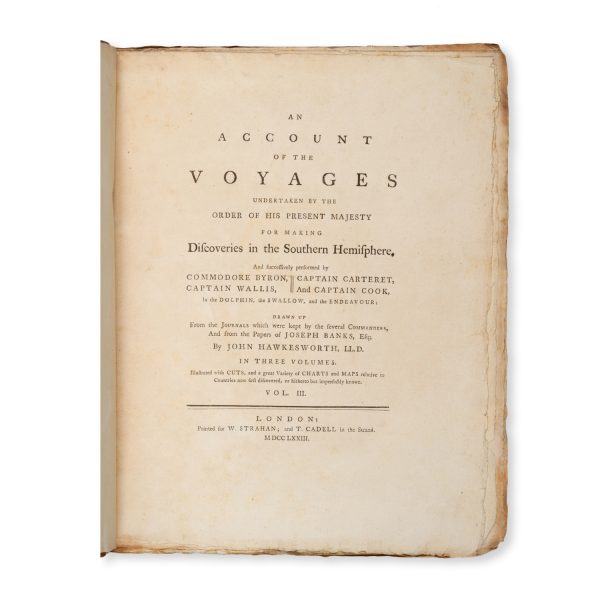 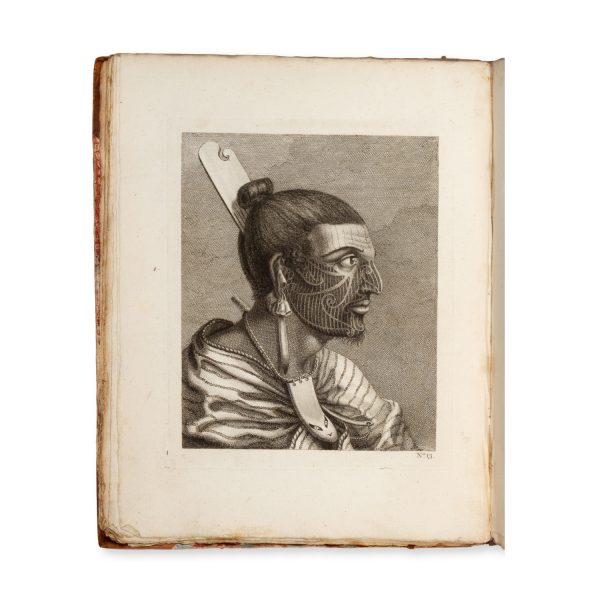 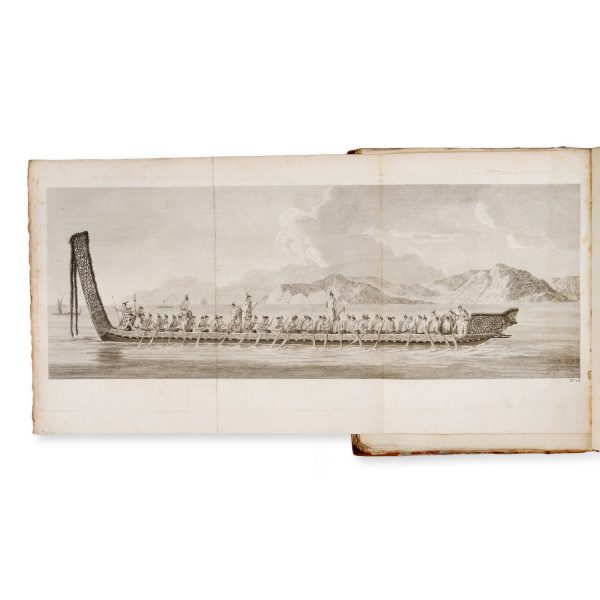 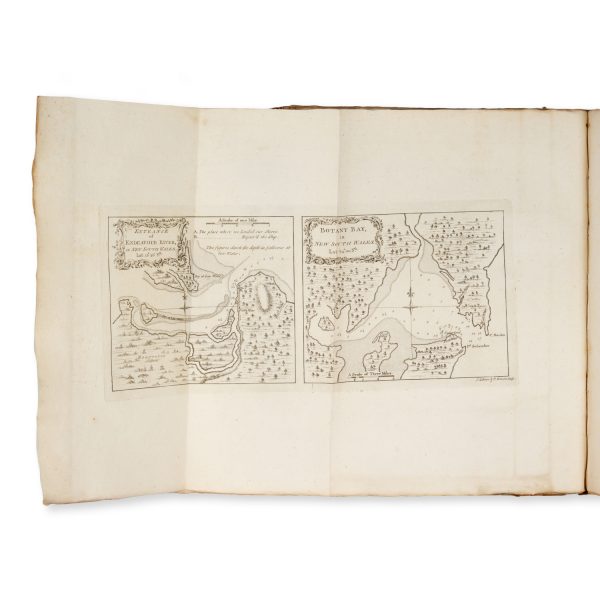 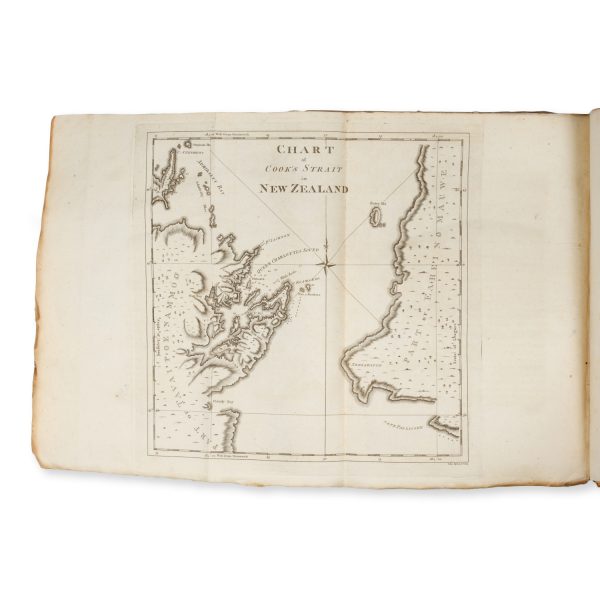 An account of the voyages undertaken by the order of his present Majesty for making discoveries in the southern hemisphere,

and successively performed by Commodore Byron, Captain Wallis, Captain Carteret, and Captain Cook, in the Dolphin, the Swallow, and the Endeavour: drawn up from the journals which were kept by the several commanders, and from the papers of Joseph Banks, Esq; by John Hawkesworth, Ll.D. in three volumes. Illustrated with cuts, and a great variety of charts and maps relative to countries now first discovered, or hitherto but imperfectly known. London: W. Strahan and T. Cadell, 1773. Three volumes, quarto, contemporary half calf over marbled papered boards, spines with contrasting morocco title labels, edges rubbed, joints cracked but cords and hinges sound, and entirely uncut set with wide margins, shelfmarks to pastedowns, unidentified armorial bookplates to verso of title pages, vol. I pp. [xii]; xxxvi; 676 (the numbering skips from 139 – 360 as per Beddie); 21 folding maps and charts; vol. II pp. xv; [i]; 410, 22 folding charts and plates; vol. III pp. [vi]; 411 – 799, 9 charts and plates. A rare uncut set in fine period binding of the first state of the first edition, with the full complement of 52 folding maps, charts and plates, including the Chart of the Straights of Magellan.

“The first voyage under Captain Cook’s command on the Endeavour was primarily of a scientific nature. The expedition was to sail to Tahiti in order to observe the transit of Venus across the disk of the sun, to determine the earth’s distance from the sun, and also to carry on the geographical discovery that John Byron had started. Entering the Pacific around Cape Horn, Cook reached Tahiti in 1769 and carried out the necessary astronomical observations.Leaving Tahiti in July, Cook discovered, named, and charted the Society Islands, and then, heading southwest, explored New Zealand, then headed towards Australia and discovered and charted the eastern coast for 2,000 miles, naming the area New South Wales. Both Australia and New Zealand were annexed by Britain as a result of this voyage which began in 1768 and ended in 1771” (Hill).

A magnificent set of the official account of Cook’s first voyage, finely illustrated with maps and plates.