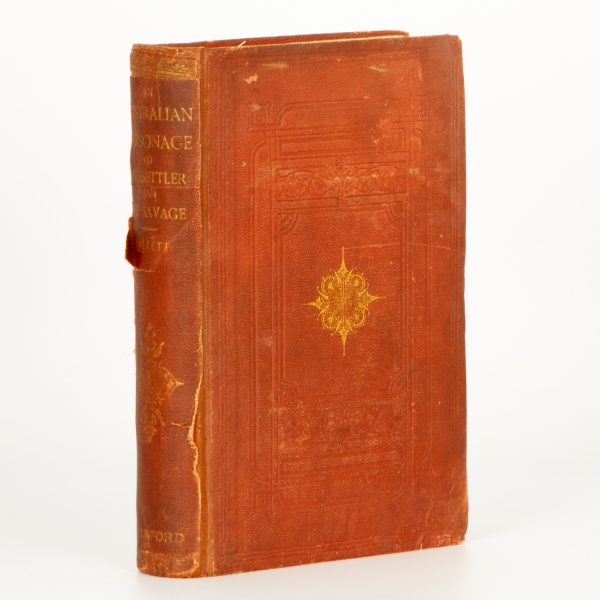 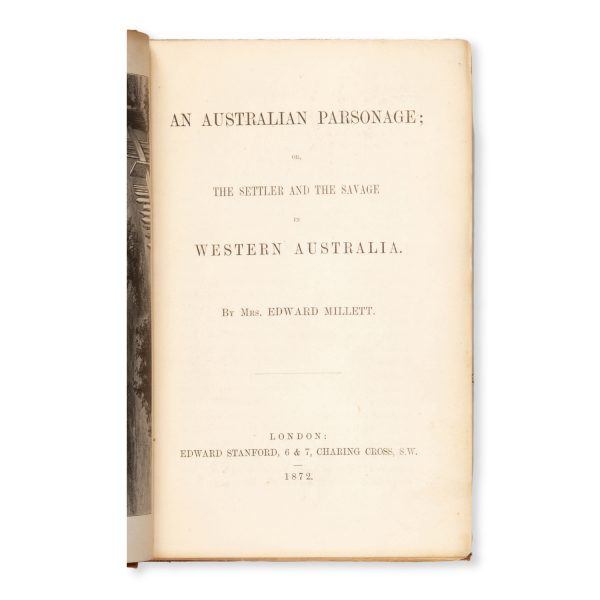 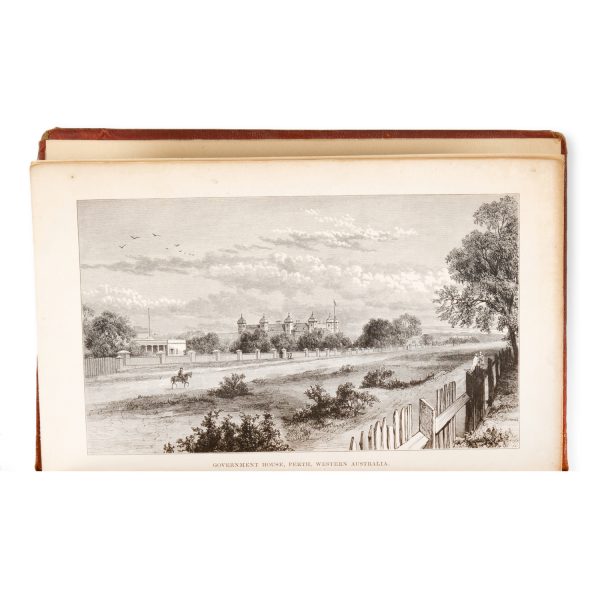 An Australian Parsonage; or, the Settler and the Savage in Western Australia.

Janet Millett was a sketcher, watercolourist and writer who lived in York, Western Australia from 1863-1869.

‘[Millett] may have become aware of Western Australia after visiting the 1862 London International Exhibition where an impressive array of that colony’s products was on show; Erickson mentions that she studied its descriptive catalogue of exhibits. The immediate cause for leaving England, however, was the incapacitating medical condition suffered by her husband, the Rev. Edward Millett, whose tic douloureux could be relieved only by doses of morphia. The Milletts disembarked at Fremantle from the migrant ship Tartar on 13 December 1863 and Edward Millett was appointed incumbent of Holy Trinity Church of England, York. They lived in York for five years until Edward resigned his chaplaincy in July 1868. Then they left for London on board the Bridgetown on 10 January 1869.

At London in 1872 ‘Mrs Edward Millett’ published An Australian Parsonage; or, the Settler and the Savage in Western Australia , personal reminiscences based on the journal and notes compiled during their stay. It gives a lively view of life in the colony, especially in rural York, which in the book she calls ‘Barladong’, the Aboriginal name for the district, ‘for reasons which will be readily understood when the limited character of the population of the colony is considered’. She showed a special interest in the Aboriginal people of the district, and soon after her book appeared the editor of a London missionary journal invited her to write an article on the Aborigines of Western Australia.

Janet Millett painted numerous watercolours while in the colony. Only two examples are known, both still owned by descendants of the York villager to whom she gave them. One shows her husband’s church, Holy Trinity Church, York, W.A. (1849, on loan to the York Residency Museum), a simple red brick gabled box (consisting of nave only) ‘bearing a painful resemblance to a barn. There was not even a bell-gable to break the uniformity of the roof; but the congregation was called together by the ringing of a bell which hung in a tall gum-tree in the churchyard’. Both tree and bell are in her painting, along with an Aboriginal woman and her baby beside their humpy. Two Aboriginal men – the Milletts’ occasional servant and regular visitor Khourabene and friend – are wandering across the church grounds behind, while to the far right is a whitewashed, verandah’d, hipped-roofed cottage (‘thatched with the rushes of the Xanthorrhoea, or blackboy’), the Australian parsonage of the book’s title.

Millett’s other watercolour is a mountain landscape scene. It, too, relates very specifically to her book:

In the latter end of the winter months it was a great pleasure to set aside some particular afternoon for the purpose of taking a party of children into the bush to gather everlastings, and to drink tea out of doors. The favourite spot was Mount Douraking, where we could sit and watch the effect of sunset over the vast forest, whilst the half-dozen children whom we had taken with us, Binnahan [an Aboriginal girl who lived with the Milletts after her mother died] as eager as the rest, ran about, remaining out of sight until they could reappear in triumph upon a high mass of rock above us, with their arms full of rose-coloured flowers.

This is precisely the moment celebrated in this second painting. Three white girls carrying flowers have gained the rocky heights together with a little black girl dressed in white, who clutches her flowers in one hand and in the other waves a white handkerchief towards the village far below.

The Milletts had numerous Australian pet animals, including a mountain-devil lizard ( Moloch horridus ) called Timothy: ‘(not that we ever expected him to come at call, but to satisfy our feeling of what was due to a creature now established as one of the family circle) … He would lie placidly on the palm of a familiar hand, showing no wish to get away; he would stand on the table most obligingly whilst coloured sketches were taken of him; but nothing ever seemed to make him especially glad or sorry’. Timothy later died and was buried for lack of arsenical soap to treat his skin so he could be stuffed, taxidermy being the particular hobby of Edward, who was making a collection of local skins and animals to take home as gifts.

A frontispiece showing Government House, Perth is the sole illustration in An Australian Parsonage and it was clearly taken from a photograph. Millett’s watercolours were for private rather than public view and others may survive in English family collections. Their value is still best understood within this private realm, now accessible to a distant generation of strangers through the context provided by her book.’ (Joan Kerr, DAAO online)