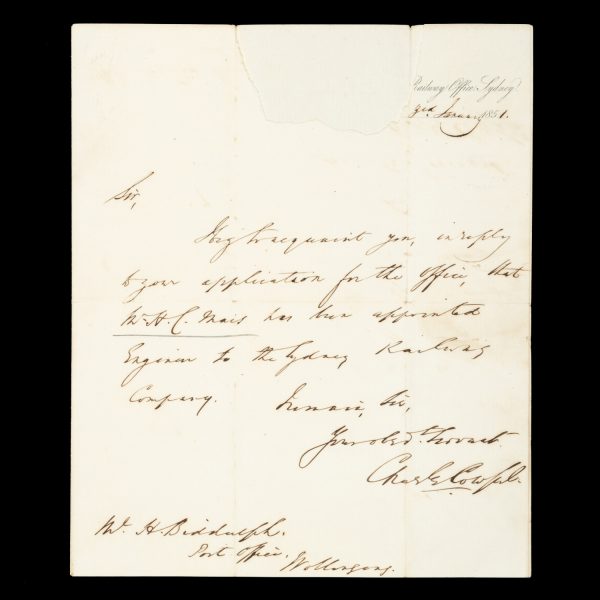 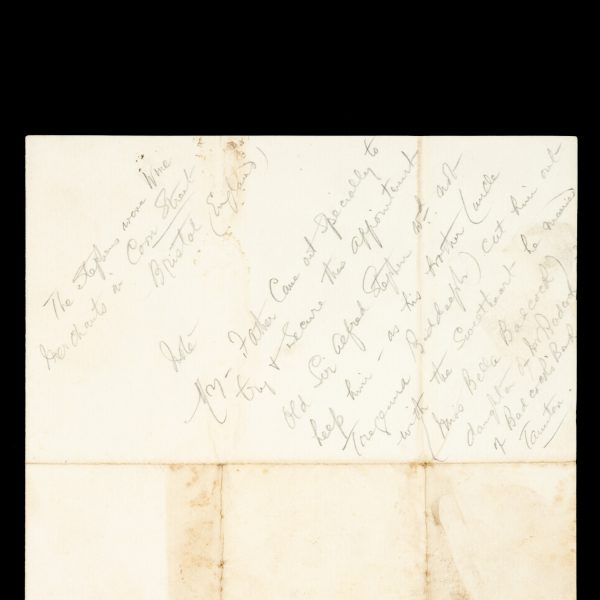 An early item of official of correspondence from the Sydney Railway Company, rejecting an application for the position of Engineer. 3 January, 1851.

Manuscript in ink on wove paper, on the lithographed letterhead of the Railway Office, Sydney, dated 3 January 1851. Quarto bifolium (225 x 185 mm), [4] pp, written on the first side only; a holograph note by Charles Cowper, Director of the Sydney Railway Company, to Mr. H. Biddulph, c/- Post Office, Wollongong, advising him that his application for the Office of Engineer has been unsuccessful, and that Mr. H. C. Mairs has been appointed to the position; the rear side has a note in pencil by Biddulph’s son, explaining that his father had come out to Australia from Bristol in the hope of securing the Engineer’s job with the SRC, but that Sir Alfred Stephen had not helped him because of bad blood between Stephen and Biddulph’s brother; some marginal loss at top edge of front, old folds, but clean and legible.

The Sydney Railway Company had been established in 1848 to oversee the construction of a railway which would link Goulburn and Bathurst with Sydney, primarily to facilitate the transportation of wool from the New South Wales interior. Due mainly to the shortage of labour caused by the gold rushes, the SRC would be declared bankrupt in 1854. New South Wales Government Railways was then formed and the first line of public railway was finally opened between Sydney and Parramatta in 1855.

Henry Coathupe Mais was appointed as Acting Engineeer of the SRC at the beginning of 1851, after the resignation of Francis Webb Sheilds. However, Mais’ performance left much to be desired and he lasted only a few months in the position before he was replaced by James Wallace, whom the Company recruited from Scotland.