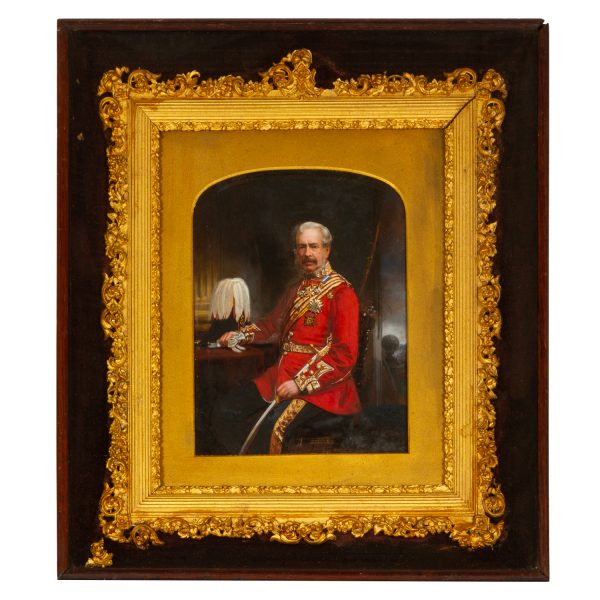 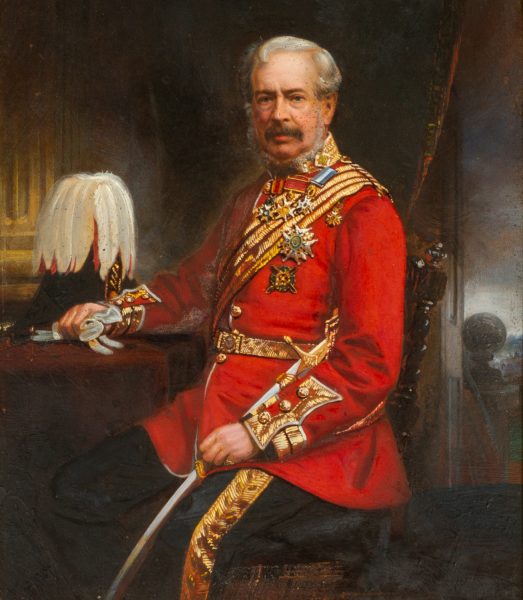 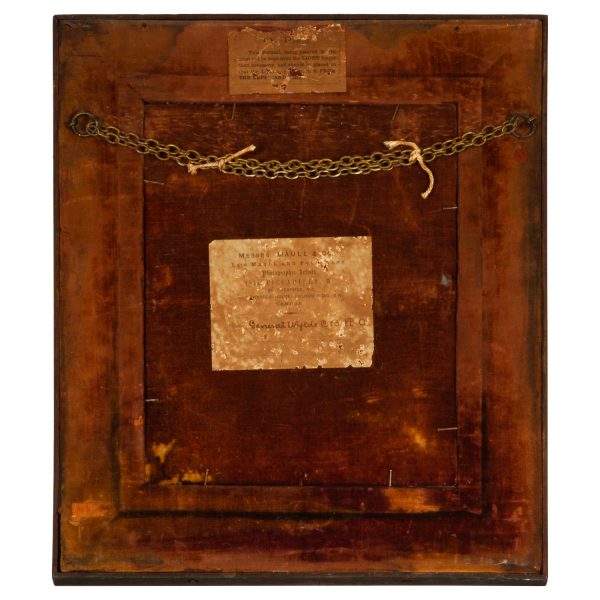 An overpainted photographic portrait of Major-General William Wylde, circa 1865.

Oil on albumen print, 200 x 150 mm, arched top format; perfectly preserved in the original gilt brass mat and ornate gilt moulded plaster frame (one small piece of which has become detached), and housed in the original glazed mahogany box frame with velvet backing; on the verso of the frame, the maker’s large printed label attached at centre of the velvet backing reads ‘Messrs. Maull & Co. / Late Maull and Polyblank / Photographic Artists / 187A Piccadilly, W. / 62 Cheapside E.C. / and Tavistock House, Fulham Road S.W. / London / Name [in ms.] General Wylde C.B., R.A.‘; a smaller label attached to the top edge of the back reads ‘Oil Painting. / This Portrait, being painted in Oil / must not be kept from the LIGHT longer / than necessary, and should be placed so / that the Light may [fall] upon it FROM / THE LEFT HAND SIDE.’; original chain for wall mounting; the painting has survived in its original flawless state, the colours strong and vibrant.

A superb example of a Maull & Co. overpainted photographic portrait.

‘Major-General Wylde served in Holland in 1813 and 1814, and commanded a battery before Antwerp and at the attack on Bergen-op-Zoom. Was attached to the Horse Artillery with the Army of Occupation in France. In April 1834 succeeded Lord William Russell as Military Commissioner at the head-quarters of Don Pedro’s army in Portugal, and continued with them until the Convention of Evora Monte; and subsequently from November 1834 to 1840 at the head-quarters of the Spanish Army, and in all the general actions during that period, including the raising of the siege of Bilboa, for which he received the thanks of the Spanish Cortes. In Portugal, again, in 1846, during the Civil War, and signed the Convention of Oporto.’

Wylde was promoted to the rank of Lieutenant-General in 1863. The following year he was made Colonel Commandant of the Royal Artillery, and became a full General in 1866. From 1868 to 1877 he was Master Gunner, St. James’s Park, the ceremonial head of the Royal Regiment of Artillery. (The appointment of Master Gunner, St James’s Park is held by a distinguished Royal Artillery Officer selected by the monarch in their capacity as Captain General, on the advice of the Colonels Commandant of the regiment, and has honorary status over all other Commonwealth Artilleries). Wylde also served for a number of years as a Groom of the Bedchamber to the Prince Consort. He died in 1877 and is buried in Brompton Cemetery.