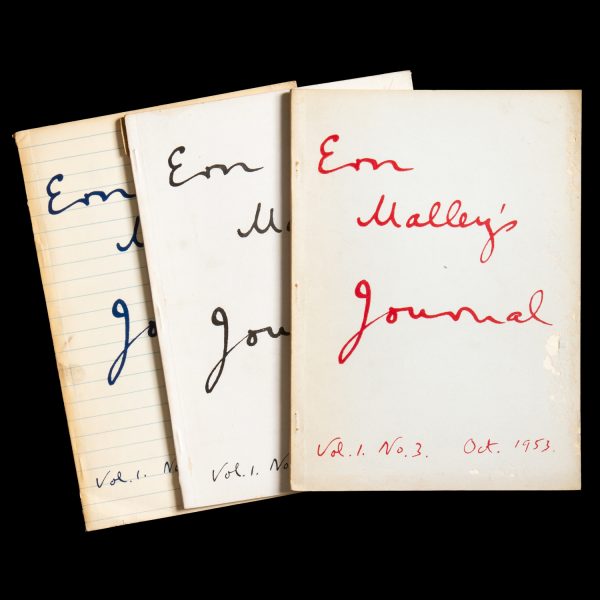 Ern Malley was the modernist poet ‘created’ by poets Harold Stewart and James McAuley in one of the most celebrated literary hoaxes in history, perpetrated in order to intellectually discredit, in particular, Max Harris, the editor of Angry Penguins and champion of surrealist and modernist poetry. Harris hailed the invented writer as a genius and published his poetry, but lost a court case in 1944 in which he was found guilty of publishing indecent literature (Malley’s poems). Harris was further humiliated when the fraud was exposed, yet he bravely went on to found this journal for literature and art with his colleague John Reed, ironically using the name Ern Malley as a defiant gesture to his critics.

In the preface to the first issue, penned jointly by Max Harris, John Reed and Barry Reid, a powerful statement of intention is declared for the journal by the three writers: ‘A Melbourne Art Critic recently said that Australian art was only of value in Australia; this we do not believe. On the contrary, we believe art ranges freely wherever the spirit is free… and we hope that if this journal reaches Europe, its readers will be enriched by being able to contemplate our nascent culture alongside their own rich heritage.’ In decrying the ‘cultural cringe’ sentiment of the anonymous critic, the editors look forward to a state of cultural affairs which today we tend to take for granted. In 1952, this journal represented a bold and fresh vision for Australian art and literature. The issues feature poetry by Australian and international writers (including Judith Wright and Joy Hester), as well as essays by John Reed (accompanied by photographic plates) on the artists Arthur Boyd and Charles Blackman.