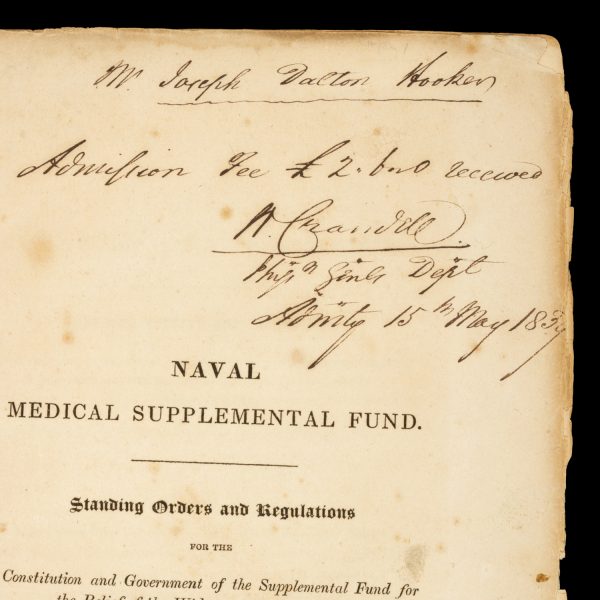 For the Constitution and Government of the Supplemental Fund for the Relief of the Widows of Medical Officers in the Royal Navy. [London : Council of the Royal Navy, 183-?]. Octavo (230 x 135 mm), stitched as issued with blue paper spine, pp [49]-54; the front is inscribed: ‘Mr Joseph Dalton Hooker. Admission Fee £2.6.0 received … Admty 15th May 1839’; chipped edges and scattered spotting, else very good.

An evocative relic from the early career of botanist Joseph Dalton Hooker (1817-1911), one of most eminent scientists of the nineteenth century.

Joseph Dalton Hooker served as assistant surgeon on HMS Erebus during the Antarctic expedition of James Clark Ross, 1839-43. Hooker had only recently received his medical degree from the University of Glasgow and, at 22 years of age, was the youngest member of the expedition. He received the news of the confirmation of his appointment on May 18, 1839. This inscribed copy of the standing orders of the Naval Medical Supplemental Fund was presented to him just three days prior to that date. It served as a receipt for Hooker’s first contribution to the fund, which had been established in 1817 for the benefit of the widows and orphans of medical officers. Medical officers were obliged to contribute to it.

Hooker’s appointment to the Antarctic expedition was secured largely through the influence of his father, botanist William Hooker (1785-1865). Since the only official position available to him was that of assistant surgeon, Hooker promptly completed his qualifications as a doctor. However, during the long voyage he was also responsible for collecting and describing zoological and geological specimens.

The expedition, under James Clark Ross, comprised two strong warships, HMS Erebus and HMS Terror, both well suited to handling encounters with pack ice. They departed from England in October 1839, and sailed for Tasmania by way of St. Helena, the Cape of Good Hope and the Kerguelen Islands, arriving at Hobart Town in August 1840. The ships sailed south from Hobart for Antarctica in November 1840. They explored Victoria Land and discovered the Ross Ice Shelf (initially named the Ross Ice Barrier), reaching a point further south than any navigator before them. The expedition then turned northwards as the weather began to make further progress impossible, returning to Hobart in early April 1841, where it remained until July. In late July 1841 the Erebus and Terror arrived at Sydney, where the expedition remained for three weeks before crossing the Tasman to New Zealand. Both ships anchored at Paihia in the Bay of Islands on August 16, and remained there until November 1841. During this time Hooker was fortunate to meet and work alongside the missionary and botanist William Colenso.

In November the expedition commenced its second season of Antarctic exploration. Seeking to continue their exploration of the Ross Ice Barrier, the ships had limited success. Hemmed in by pack ice, the crews celebrated New Year’s Day 1842 with a grand ball on the ice. Then, after they had managed to sail clear of the immediate danger, Terror and Erebus collided in a storm. Although the ships were able to be separated, Erebus sustained serious damage and was forced to undergo repairs at sea. The expedition reached the Falkland Islands in April 1842, where it remained until its third and final Antarctic season commenced in December of that year. Heading south from the Falklands with the aim of exploring the Weddell Sea, the ships managed to penetrate further south than Dumont d’Urville had done in 1838, but were again ultimately thwarted by the ice conditions. The Erebus and Terror arrived back in England early in September 1843.