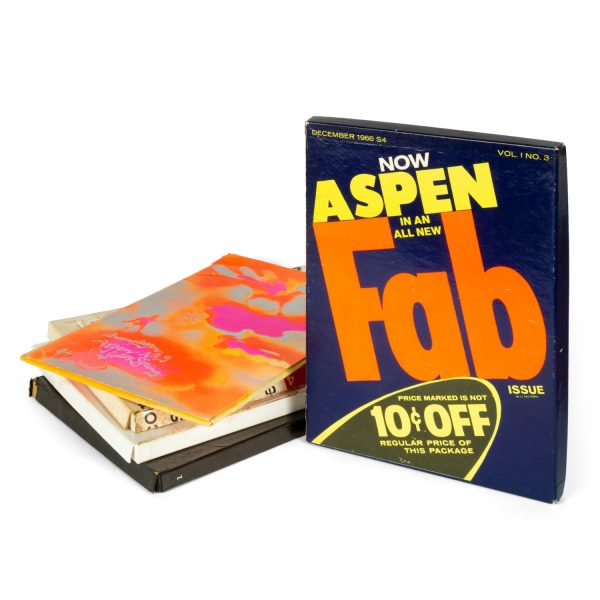 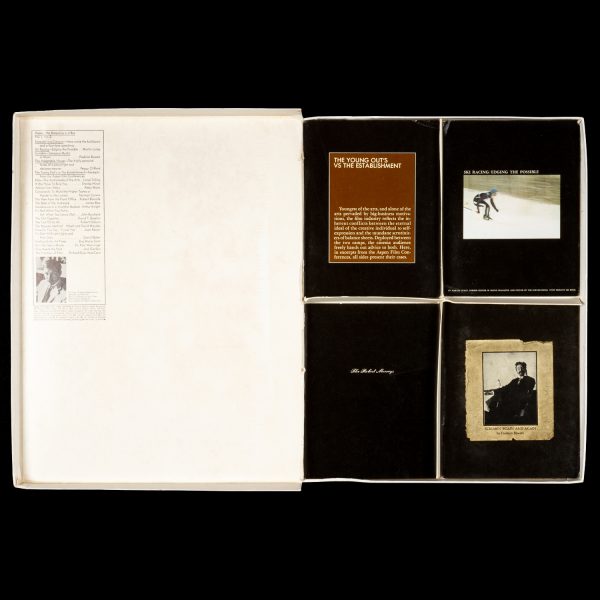 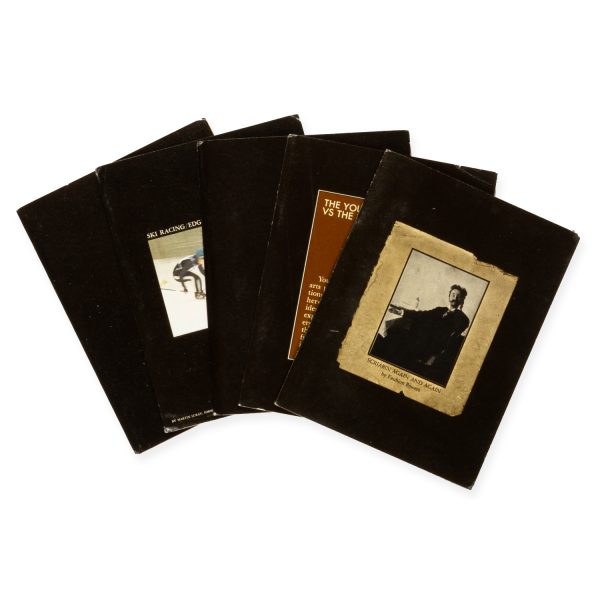 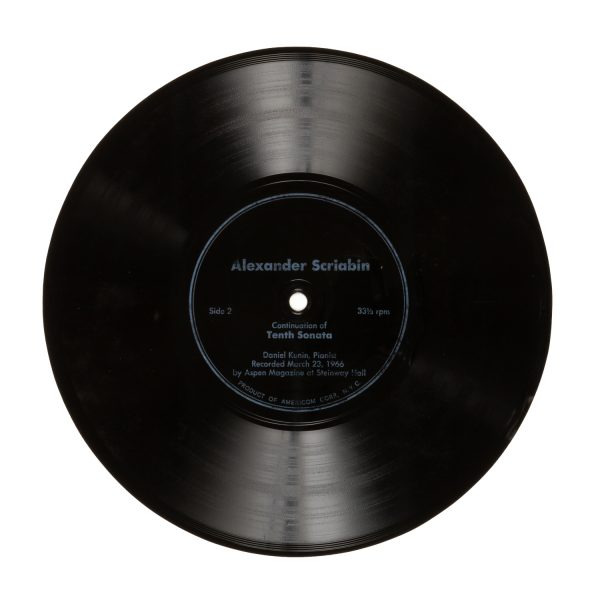 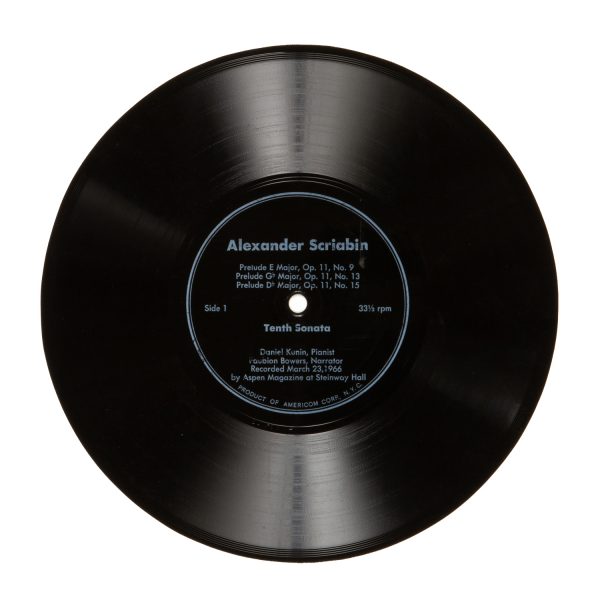 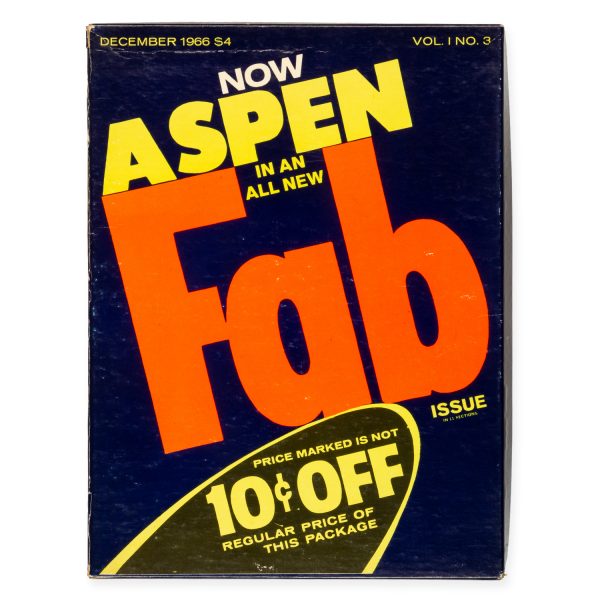 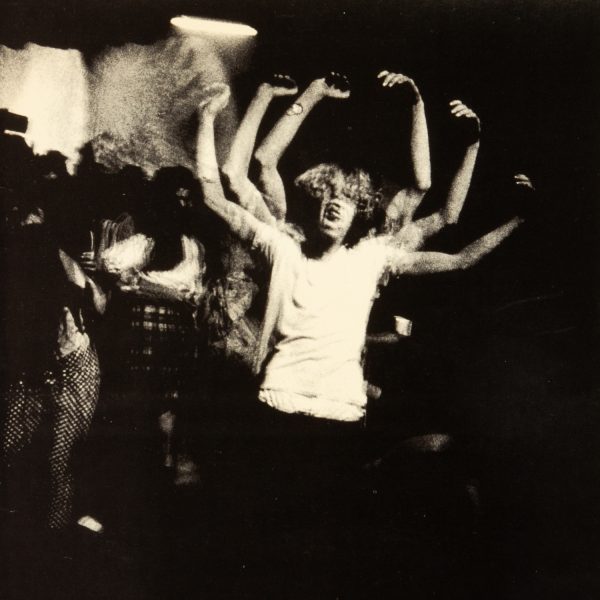 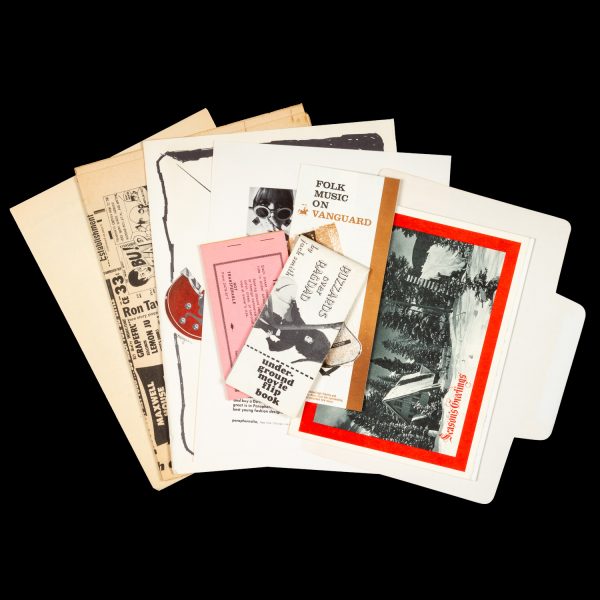 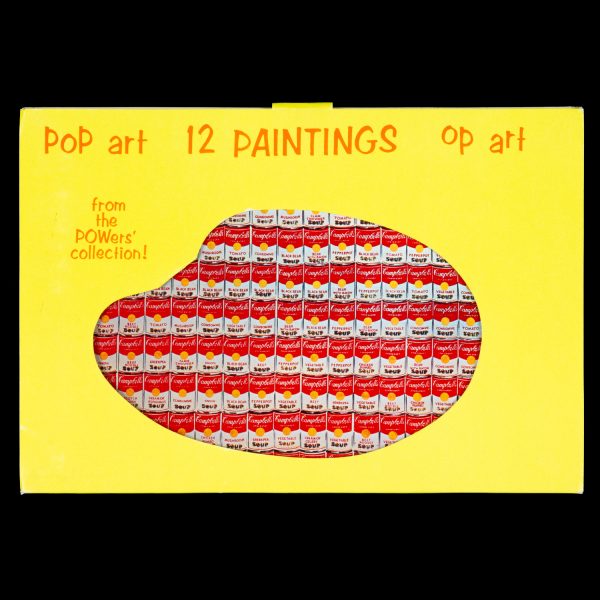 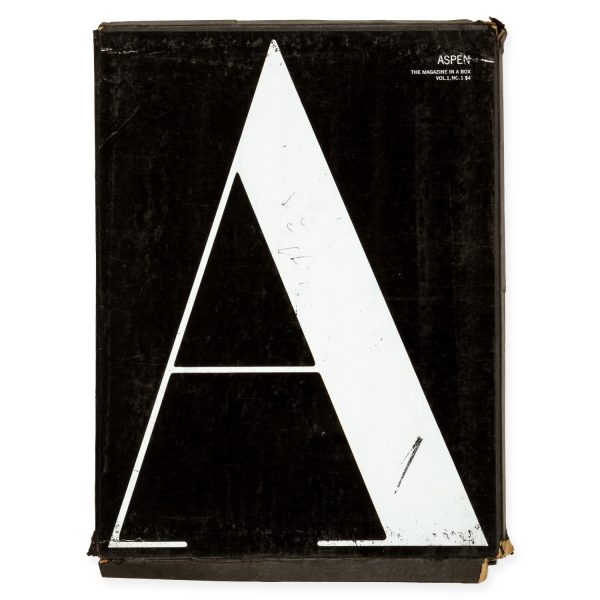 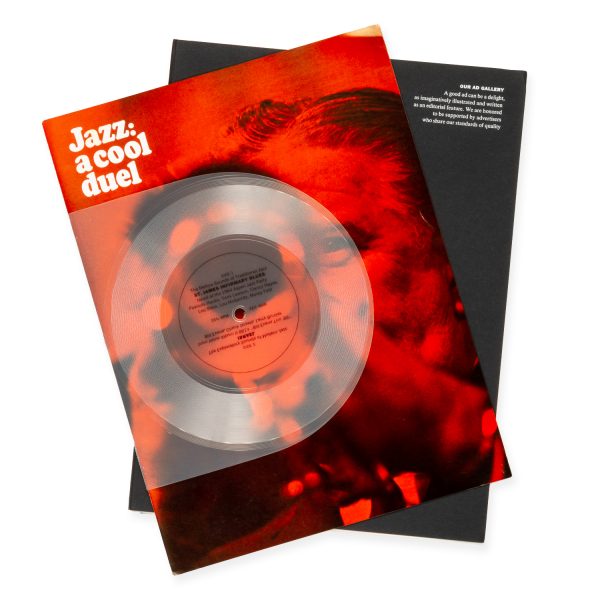 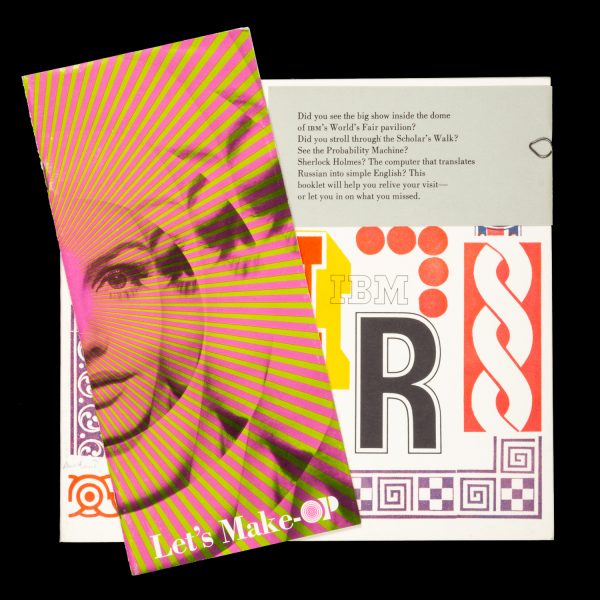 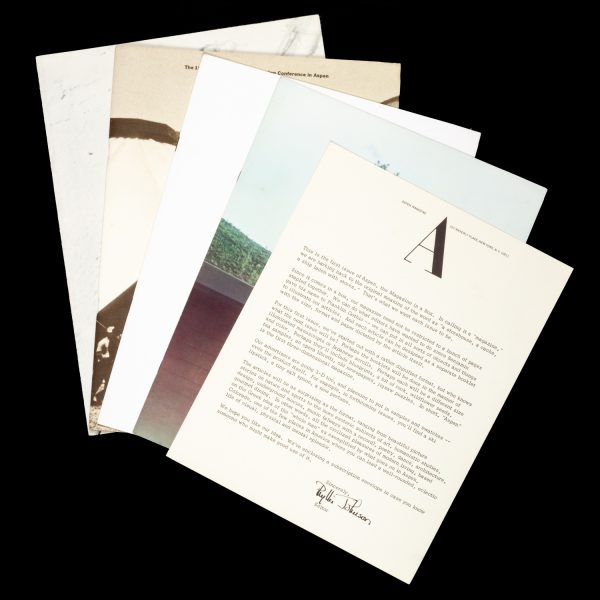 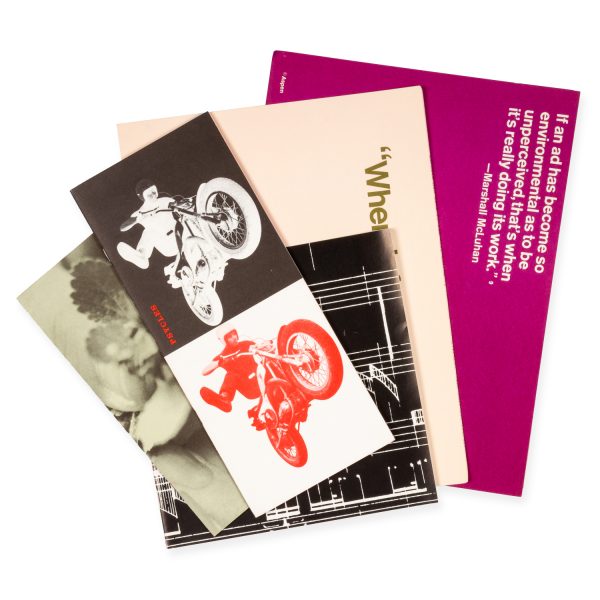 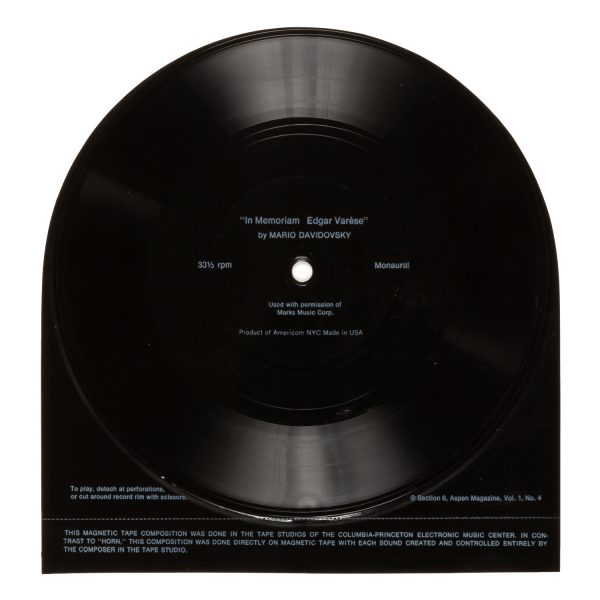 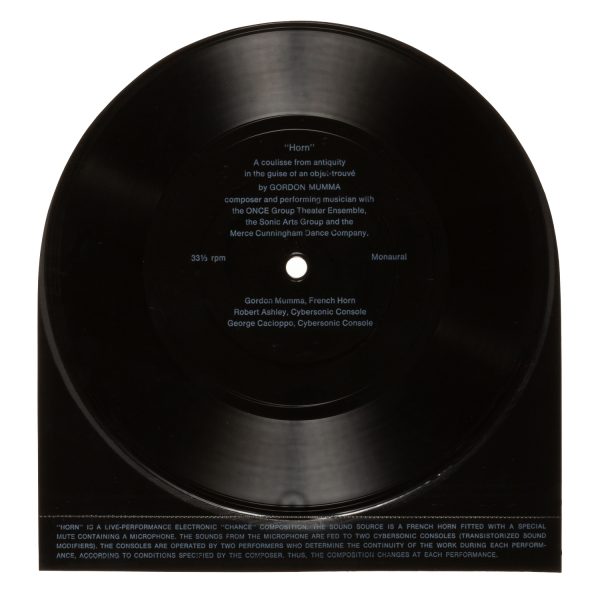 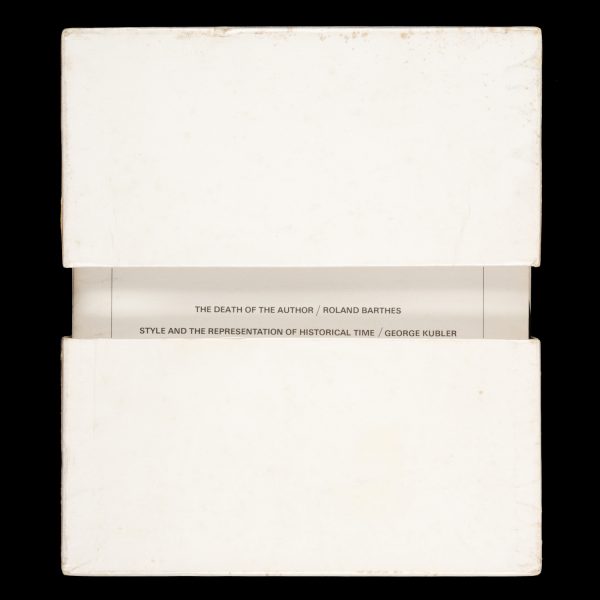 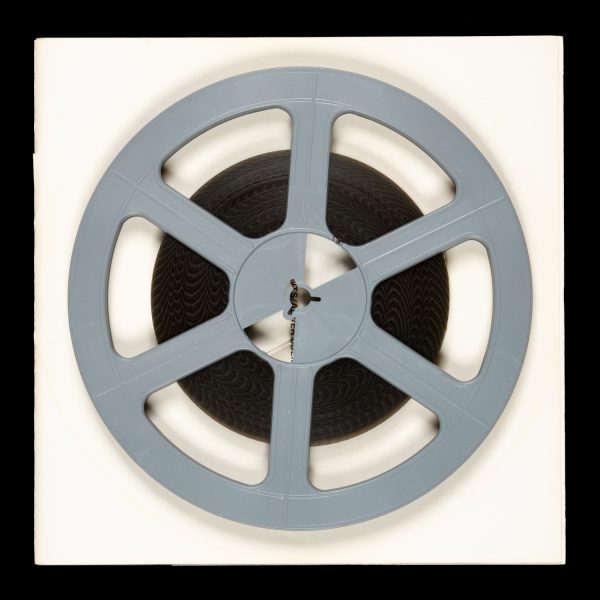 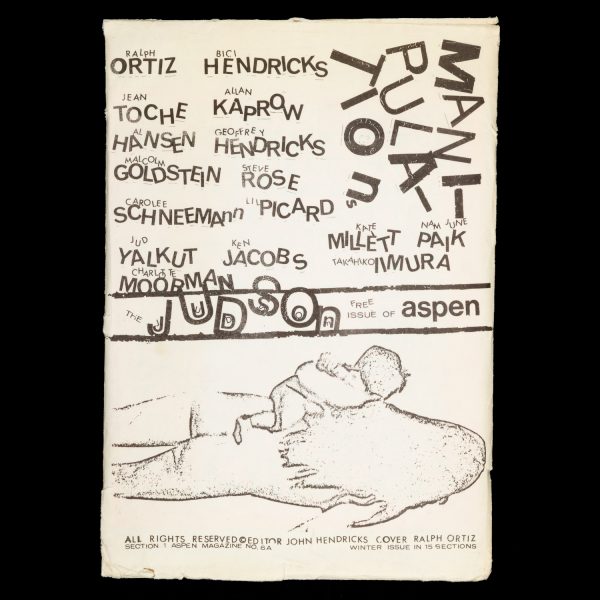 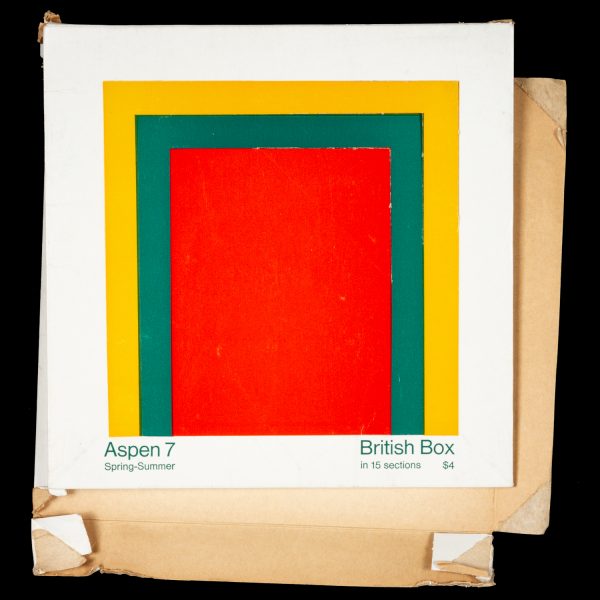 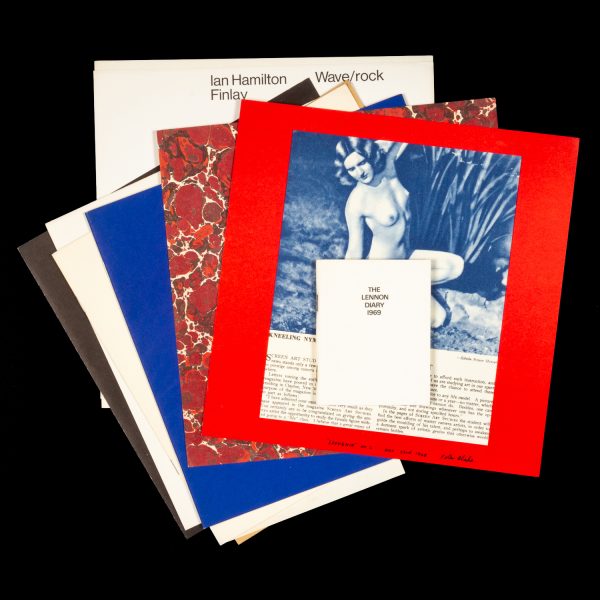 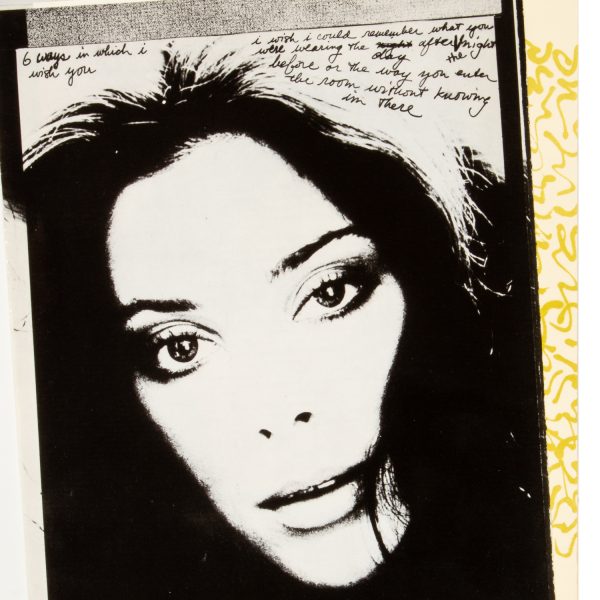 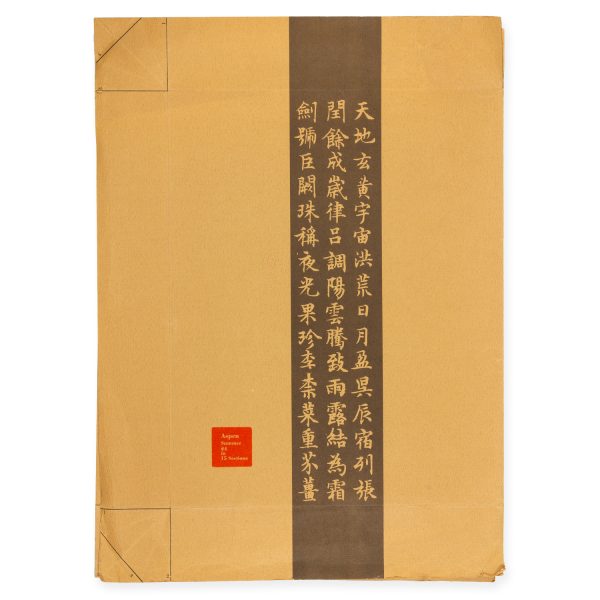 ‘The editor Phyllis Johnson, who used to spend her winters in Aspen, Colorado, understood that the great spirit of experimentation that defined the art scene in the sixties demanded a new form of presentation. This is how ASPEN. The Multimedia Magazine in a Box was born in 1965. It was the first ever three-dimensional magazine. Subscribers received a box containing material for reading, listening, smelling, observing. John Cage, Merce Cunningham, Marcel Duchamp, Yoko Ono, Robert Rauschenberg, The Velvet Underground and Andy Warhol, among others, collaborated in the project until its demise in 1971. Following the tradition of Marcel Duchamp’s boîte-en-valise, or ‘portable museum’, ASPEN is considered a masterpiece of experimental art and institutional critique.’ – Museu d’Art Contemporani de Barcelona website  https://www.macba.cat/en/exhibitions-activities/exhibitions/aspen-multimedia-magazine-box

Complete sets in good condition are extremely rare. This set is entirely complete, with the exception of two minor subscription forms (no doubt completed and returned to receive the next issue!). The boxes show edge wear as usual and the two flimsy card boxes are presented flattened, as they were originally acquired. There is occasional light foxing to a few of the contents. The collection of ephemeral and creative material in Aspen is one of the highlights of artistic publishing in the 1960s.

2 Jazz: A Cool Duel. Three perspectives on jazz, from three active musicians. In Praise of Dixieland (Freddie Fisher) / In Defense of Latter-Day Jazz (Jon Hendricks) / In Explanation of All Jazz (Chuck Israels)

6 The Hide-and-Seek Bird of the Timberline. Timothy Thomas and Tony Gauba on the white-tailed ptarmigan.

7 Configurations of the New World. Extracts from thirteen papers presented at the 15th annual International Design Conference in Aspen.

2 Scriabin: Again and Again. Faubion Bowers on the work and life of Russian composer Alexander Scriabin.

4 Ski Racing: Edging the Possible. Martin Luray on the mystique of downhill skiing.

5 The Robert Murrays. A visit with the residents of a simple, site-friendly mountain home, by Pegggy Clifford.

6 Farewell to a Canyon. The demise of Glenwood Canyon, documented by an anonymous author.

7 The Young Outs vs. The Establishment. Seventeen excerpts from papers presented at the Aspen Film Conference.

Aspen No. 3. The Pop Art issue

Contents: Eleven items, all but two of them numbered (items 9 and 10 unnumbered in the original), plus loose advertisements. Designed by Andy Warhol and David Dalton. Published December 1966 by Roaring Fork Press, NYC.

2 Music, Man, That’s Where It’s At. Folder, enclosing items 3 through 6; resembles a contemporary press kit for a rock and roll band.

3 The View from the Bandstand: Life Among the Poobahs.The Velvet Underground’s Lou Reed on rock and roll music.

4 The View from the Critic’s Desk: Orpheus Plugs In. New York Times critic Robert Shelton on rock and roll music.

7 Homeward Bound: The Rand House. Profile of a rustic, owner-built home, and its residents, by Bob Chamberlain.

10 Ten Trip Ticket Book. Resembling a book of tickets, excerpts from fourteen papers (including one by Leary) presented at the Berkeley Conference on LSD.

Aspen No. 4. The McLuhan issue

1 Box. Hinged box 9-1/2 by 12-1/2 by 3/4 inches. Illustrated with a circuit board, with wraparound text continuing inside the box. Contains sections 2 through 9.

3 The TV Generation. Poster of a color photo taken at the Tribal Stomp at San Francisco’s Avalon Ballroom. Text on reverse side.

4 Diary: How to Improve the World (You Will Only Make Matters Worse). Random observations by John Cage.

5 The Electronics of Music. Essay on electronic music by Faubion Bowers and Daniel Kunin.

6 Phonograph recording. A Recorded Sampler of Electronic Music. Side A: In Memoriam of Edgar Varèse, by Mario Davidovsky. Side B: Horn, by Gordon Mumma.

7 The Braille Trail. Bob Lewis and Alfred Etter describe a nature trail for the blind.

8 Psycles. Excerpts from The Bikeriders, Danny Lyon’ book about the Chicago Outlaws motorcycle club. Prefaced by a meditation on motorcycling by Bob Chamberlain.

2 Contents. Editor’s description of items included with this issue.

4 Phonograph recording. Beckett / Gabo & Pevsner. Side A: Samuel Beckett’s Text for Nothing #8 (1958), read by Jack MacGowan. Side B: The Realistic Manifesto (1920), by Naum Gabo and Noton Pevsner, read by Naum Gabo.

14 The Russian Desert: A Note on the State of Our Knowledge. Douglas MacAgy on Russian art history.

15 Conditionnement. Reverse side: Repair. A poem by Michael Butor, translated by Michael Benedikt.

17 Serial Project #1. Description of an installation at Dwan Gallery by Sol Lewitt.

19 Structural Play #3. Description of a performance piece by Brian O’Doherty.

20 The King of Denmark. Part of a musical score by Morton Feldman; recording at item 6.

22 Drawings for The Maze. Illustrates and describes a model by Tony Smith, included in this issue. Its eight pieces are numbered items 7 through 11 and 25 through 27.

23 Translation of Jealousy (Recorded excerpt). A translation by Richard Howard of the excerpt read by Robbe-Grillet on item 5.

Included in some copies in lieu of the film spool was a note from the publisher promising that the reel of film would be mailed seperately.

28 Advertisements/Advertisements. Folder, enclosing a sheet for Artforum, 8 by 22 inches, accordion-folded to 8 inches square; sheet for from Wesleyan University Press advertising John Cage’s Silence and A Year from Sunday, 8 by 22 inches, folded twice to 8 inches square; a checklist of Something Else Press books and Great Bear pamphlets, 8-1/2 by 11 inches; a die-cut, color brochure for Bolex super-8 projectors, 9 by 8-3/8 inches, folded to 3-1/8 by 6 inches; subscription form for Aspen, 8-1/2 by 10-5/8 inches, folds to make its envelope (misfolded, to fit in this box); green, black, and white Aspen renewal order form, 6-1/4 by 7-1/4 inches, with perforated detachable envelope.

Aspen No. 6A. The Performance Art issue

Contents: Fifteen items, all but one of them numbered (item 4 not numbered in the original); no advertisements. Edited by Jon Hendricks. Published Winter 1968-69 by Roaring Fork Press, Inc.

4 No. Notes for an event arranged by Kate Millett for performance at Judson Gallery on 21 October 1967.

5 Push and Pull: A Furniture Comedy for Hans Hoffman.Description and notes for a performance by Allan Kaprow.

7 The Diagram of Projection of “White Calligraphy.” Notes for a performance by Takahiko Iimura at the Judson Gallery, October 1967.

8 Descriptive letter of our summer in Easthampton. A letter from Ken Jacobs to John Hendricks of Judson Gallery, describing a film experiment.

10 Divisions and Rubble. Notes for a performance by Carolee Schneemann at Judson gallery.

13 Labyrinths and Psychological Stress. Notes on performance by Jean Toche.

15 Some Notes. Notes by Jon Hendricks, dated 7 February 1969. On the reverse, a description of this issue’s origin and a list of its contents.

Aspen No. 7. The British issue

Lettered and decorated white card box, 250 x 250 mm, flattnened, corners split. The card for this issue’s box is much flimsier than previous issues. The box shipped flat and assembled by the recipient, however because it was so weak in is usually found somewhat squashed. In this occasion it has been left flattened again as originally issued.

11 Phonograph recording. Yoko Ono & John Lennon. Side A: Song for John and No Bed for Beatle John by Yoko Ono. Text printed in item 9. Side B: Radio Play by John Lennon.

Aspen No. 8. The Fluxus issue

2 In Place of a Lecture. Three Musics for Two Voices. Text by Eleanor Antin and David Antin.

3 Hot / Cold Book. Book of terms describing similar and opposite physical properties, and hierarchies among them. By Terry Atkinson and Michael Baldwin.

4 1 + 1 for One Player and Amplified Table-Top. A musical score by Philip Glass.

8 Three Distributions. “People Plan,”schematic drawings; “Lecture on moving,” text; and, on the reverse side, “Selection of Slides from ‘North East Passing’,” photos. By Yvonne Rainer.

10 Introduction to the Young Turtle Assymetries.Description of chance-generated poems for simultaneous performance, by Jackson MacLow, with text on five detachable cards. Phonograph recording at item 5.

Aspen No. 9. The Psychedelic issue

1 Dream of Goeralegan. Text and illustration by Don Snyder.

2 From The Invasion of Thunderbolt Pagoda. Color photographs by Ira Cohen and Bill Devore.

3 Musical Scores and Glyphs. Drawing in Mayan style, by Aymon de Sales, and a poem.

7 Letter to Diane and Shelley from Vali. Text & drawings by Vali, photos by Diane Rochlin.

9 The Soul of the Word. Text and calligraphic designs by Marian Zazeela.

12 Sentential Metaphrastic. Poem by Lionel Ziprin, illustrated with a photograph by Tom Carroll.

13 Printed folder, 9-3/8 by 12-5/8 inches. Inside printed with table of contents. Folder designed by Hetty MacLise. Encloses sections 2 through 13, and a sheet of translucent paper laid atop them.

1 Clearing Autumn Skies Over Mountains and Valleys.Painting by Kuo Hsi (1020-1090), and an essay on the painting, by Allen Atwell.

2 Thou Art That. An essay on Hinduism by Michael Thomas, and five photos of Indian temple sculpture by Kenneth Metzner.

3 The Yama Tanka. Essay on a Tibetan hanging scroll, by Allen Atwell.

7 Waves. A screen painted by Ogata Korin (1658-1716), and a note on the work, from a Metropolitan Museum of Art publication.

8 The Idea In the Brush and the Brush In the Idea.Exemplary calligraphy, and title essay by Ching Ying.

9 A Mountain Village in Clearing Mist. Painting by Ying Yu-Chien, with an unsigned note on the work, and an essay by Osvald Siren.

10 Tagasode (Whose Sleeves?). Screen painted by an anonymous artist in the 17th century, and an unsigned note on the work.

11 Noh and Kyogen Plays. Screen painted by an anonymous artist of the 17th century, and an unsigned note on the work.