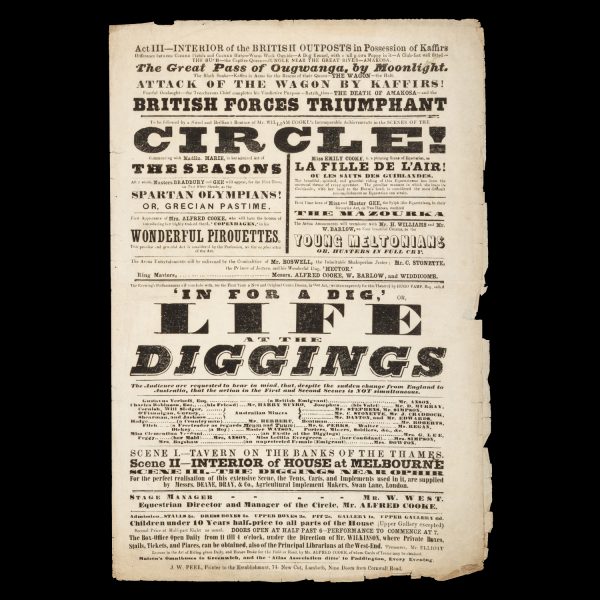 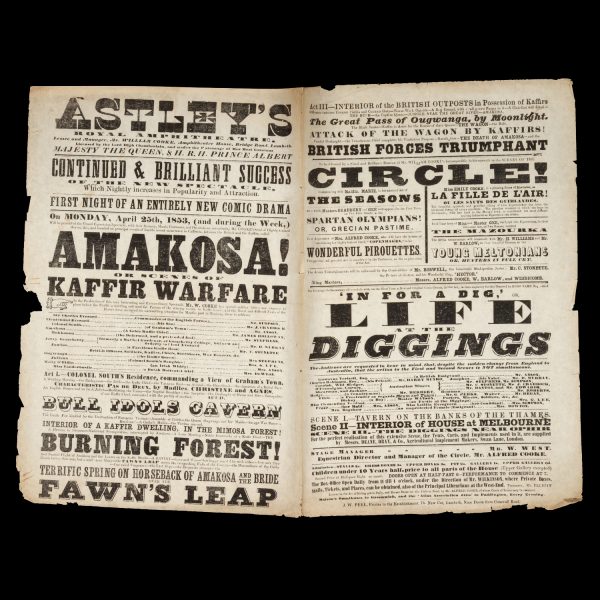 Astley’s Royal Amphitheatre. Amakosa! or Scenes of Kaffir Warfare … [and] “In For a Dig,” or, Life at the Diggings.

The Audience are requested to have in mind, that, despite the sudden change from England to Australia, that the action in the first and second scenes is NOT simultaneous … … Lambeth : J. W. Peel, Printer to the Establishment, 25 April 1853. Double-page playbill, 380 x 510 mm; lithograph printed; original central fold, some insignificant marginal tears, but a very clean example.

An exceptionally rare large-format playbill produced for the opening night of a play set on the New South Wales goldfields and in Melbourne. Written by Hugo Vamp (the pseudonym of J. R. O’Neill), In For a Dig was a ‘comic drama in one act’ commissioned from the author by the Royal Amphitheatre in Lambeth, south London (according to information printed on the playbill), where it was first performed on 25 April 1853. The play was not published, but O’Neill’s original manuscript – complete with illustrations – is held in the British Library.

The playbill provides a complete list of characters and actors in the play, which was the last piece in a long evening of entertainment that commenced with the sensational Amakosa!, set in southern Africa.

Below the cast list, the three scenes are described as follows: Scene I. Tavern on the banks of the Thames; Scene II. Interior of house at Melbourne; Scene III. The Diggings near Ophir. In relation to the final scene, it is noted that ‘For the perfect realisation of this extensive Scene, the Tents, Carts, and Implements used in it, are supplied by Messrs. Deane, Dray, & Co., Agricultural Implement Makers, Swan Lane, London.’

Trove locates no example of this particular playbill, nor of any other playbill or broadside advertising this very early gold rush-inspired play.