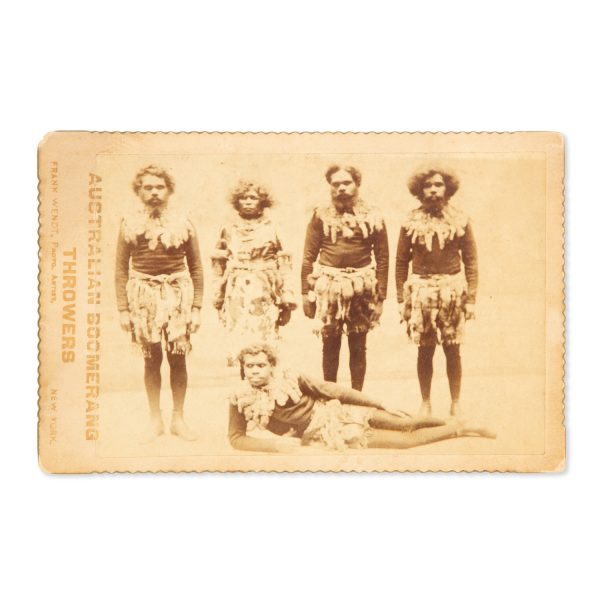 There are very few known photographic images of indigenous Australians taken outside Australia in the nineteenth century. This previously unrecorded photograph shows five of the Australian Aborigines in the Canadian impresario R.A. Cunningham’s second international touring company, sometimes referred to as King Bill and Company, taken in the New York studio of Frank Wendt early in 1894, during the tour of 1892-98.

Acting as an agent for P.T. Barnum, Cunningham had originally visited Australia in 1883 and ‘enticed’ nine Australian Aborigines from North Queensland to travel with him to North America as part of an ethnological troupe which Barnum had formed. In 1884, assuming control of the group – now reduced to seven with the death of two members – Cunningham took them to Europe. The members of the troupe were coerced into performing acts such as boomerang throwing on stage, producing an exotic spectacle for the titillation of a curious public and the benefit of the promoter’s pocket. Only three members of Cunningham’s first international touring group were to return to Australia.

The members of Cunningham’s second troupe, several of whom were from Mungalla station and the surrounding district on the Herbert River, were recruited by him in Townsville in 1892. They arrived in San Francisco at the start of September of that year. Cunningham had special costumes made for their performances, which included black fully body leotards. From the examination of photographic records, Poignant (Professional savages, p. 204) demonstrates that there were eight troupe members at the commencement of the tour. A photograph taken soon after their arrival by Elite Studios, San Francisco, held in the National Library of Australia, shows King Bill (William 3) and his wife Jenny, Dottie and her husband William 2, William 1, Tommy, Harry Mathews, and Dick Eliot. The latter two left the tour in California, joining another promoter.

Between May and August 1893 the troupe was based in Chicago, where it appears to have been one of many unofficial ‘satellite’ attractions performing on the Midway Plaisance (a public park) and profiting from the huge number of visitors at the World’s Colombian Exposition. By late November it was staging boomerang throwing demonstrations at an outdoor venue in Brooklyn, New York. With the onset of winter, however, Cunningham decided to announce the group’s last shows and his intention to depart for Europe. He arranged for the six remaining members of his troupe to be photographed in Frank Wendt’s Lower East Side studio, which had formerly belonged to Charles Eisenmann, the noted photographer of sideshow “freaks” and circus performers.

The present photograph, however, includes only five of the remaining six members: (standing, l-r): King Bill, Jenny, William 1, William 2; (reclining): Tommy. Dottie, who appears in at least one other of Wendt’s studio photographs, is absent. She died in New York, according to Poignant, ‘some time between the end of December and spring’ (ibid. p. 223). With a new manager, Frank Frost, the five survivors would join Barnum and Bailey’s circus for the touring season of 1894. It seems safe to speculate that this previously unknown portrait was taken in the first couple of months of 1894, at the start of Frost’s managership, either whilst Dottie was still gravely ill, or soon after her death.

The successful Barnum and Bailey season took in Chicago and thirteen states. At the end of August Tommy was hospitalised with pneumonia in Minneapolis. He died on the group’s return to New York in December 1894. The four remaining troupe members next joined Pawnee Bill’s Historical Wild West Show for its 1895 tour of the United States. They spent the winter of 1895-96 in New York, fending for themselves in a hostile and unforgiving environment. Only three of the group remained alive to make the trip across the Atlantic to Europe (King Bill, Jenny and William 2), where they toured extensively in Germany and Scandinavia during 1896-97. Shipping records show that only Jenny and William 2 embarked at London for the voyage home to Australia in 1898.