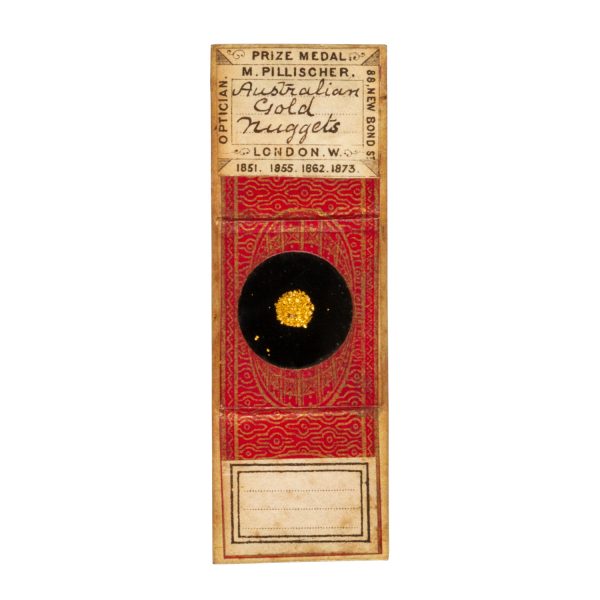 A scarce scientific curio relating to the Australian gold rushes.

‘Moritz Pillischer emigrated from Hungary to London, England in 1845. He opened an independent shop that produced microscopes and other scientific and mathematical instruments in about 1849. While his instruments were not quite as precise as the top three English makers (Powell and Lealand, Ross, and Smith, Beck & Beck), they were widely considered to be nearly as good as those makers’ products, but at a fraction of the price. The quality of Pillischer microscopes is reflected by the numerous prizes awarded at international exhibitions, which are noted on the labels of microscope slides sold by Pillischer. Moritz’s nephew, Jacob (who adopted the name “James”), moved to London around 1860 to work for his uncle. Jacob later became Moritz’s son-in-law, after marrying one of his daughters. Moritz handed over ownership of the business to Jacob in 1887. The company was later inherited by Jacob’s children, and the business was liquidated in 1947.’ (Microscopist.net)

Pillisher won awards for his microcopes at exhibitions in London (1851 and 1862), Paris (1855) and Vienna (1873). The fact that the latter date is printed on the label of this slide containing specimens of Australian gold suggests the slide was probably made between 1873 and 1875.