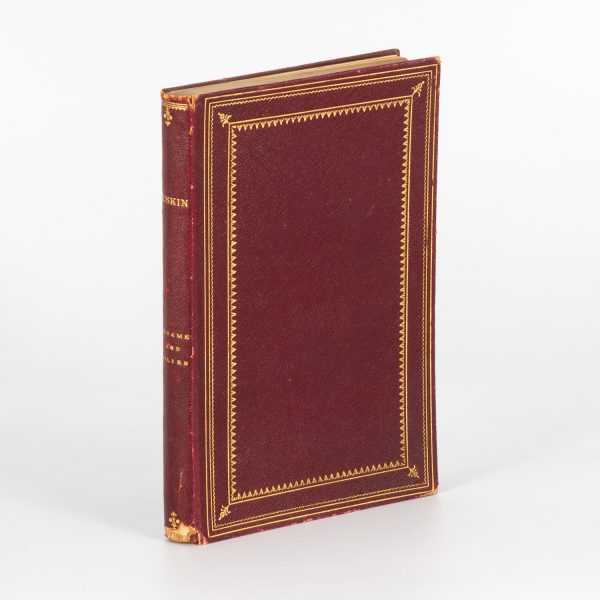 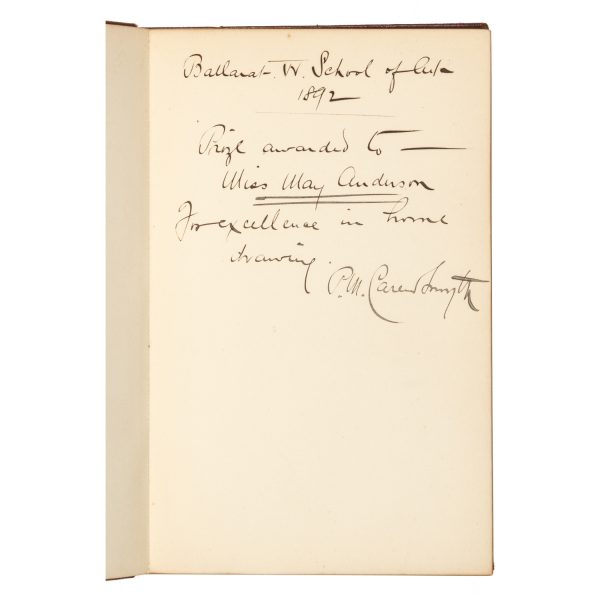 The work is comprised of two lectures delivered in December 1864 at the town halls of Rusholme and Manchester. Of kings’ treasuries was written in support of a library fund, and explored reading practice, public education, and the cultural value of literature. Of queens’ gardens supported a school fund, and concerns itself with the role of women, their rights and duties in education and the household.

Sesame and lilies proved to be one of Ruskin’s most popular works, and was regularly awarded as a school prize. The present copy was awarded to young Ballarat art student May Anderson and is inscribed by Ponsonby May Carew-Smyth, A.R.C.A. London, the first master of the Ballarat Technical School of Design (established in 1891 – see below) and later the Victorian Art Inspector of Technical Schools. A fellow student of Miss Anderson, and one of the first cohort of students to attend the school, was the gifted artist Harold Brocklebank Herbert, whose artistic talent was “discovered” and encouraged by Carew-Smyth.

‘Ponsonby May Carew-Smyth (1860-1939), educationist, was born on 7 August 1860 at Cork, Ireland, son of Emmanuel Uniacke Smyth, gentleman, and his wife Catherine Giles, née Carew. Carew-Smyth’s initial art training and teaching was at the Belfast Government School of Art and Design. In 1885 he entered the National Art Training School at South Kensington, London, where he remained as student and teacher for five years. He also taught at Rugby School, studied at the Royal School of Wood Carving and the Guild School of Handicrafts, London, and was sent by the Department of Science and Art to study art, art education and museum procedures in Paris. Testimonials to his career in England affirm his ability and dedication as an educationist and his integrity as a man.

On 23 December 1890 Carew-Smyth married Marie Reynolds of Brixton; they migrated to Australia next January. In September Carew-Smyth applied from Melbourne for the position of master of the school of art and design, established under the auspices of the Ballarat Fine Art Gallery. Opening in November, the school offered day classes and a broad curriculum, and under Carew-Smyth’s guidance, established a sound reputation.

In November 1899 he was appointed inspector of drawing in the Department of Education. Carew-Smyth saw drawing as a crucial link between primary and technical education, insisting on it as a ‘mental process quite as much as a manual’; he believed strongly in the utilitarian value of drawing to the artisan class and of art as ‘craftmanship’. By his emphasis on teacher-training, by his role in the Teachers’ Training College, and by his constant travels, writing and lecturing, he upgraded both the standard and importance of drawing early in the century. His meticulous mind formulated the Austral Drawing Books which provided the basis of instruction in the subject in Victoria until 1927.

Although he gave his occupation as ‘artist’, Carew-Smyth was primarily an educationist. He was actively involved in the early years of Prahran and Swinburne Technical colleges, and especially the Working Men’s College which held his interest even after his retirement. In 1906 he was appointed chairman of the Victorian State Schools’ Equipment and Decoration Society, and he was important in the organization of the state schools’ exhibition that year. He designed the commemorative wall plaques installed in state schools after World War I, and the art teachers’ certificate. He was prominent in bringing about the 1922 Jubilee Exhibition, and the 1926 showing of work of overseas schools, and especially the 1934 Melbourne centenary ‘Early Victorian Art’ exhibition. In the 1930s he wrote wide-ranging, informative and sometimes humorous articles for the Argus on various aspects of the decorative arts. In mid-1936 he was acting director of the National Gallery of Victoria.

To students his single-mindedness sometimes suggested sternness, but Carew-Smyth was always held in the highest regard both professionally and personally. His colleagues recalled a man of kindness, unstinting devotion to work, and humour; he was considered quite a raconteur. Survived by his wife, a son and a daughter, he died in his home at South Yarra on 9 October 1939, and was cremated.’ (ADB)