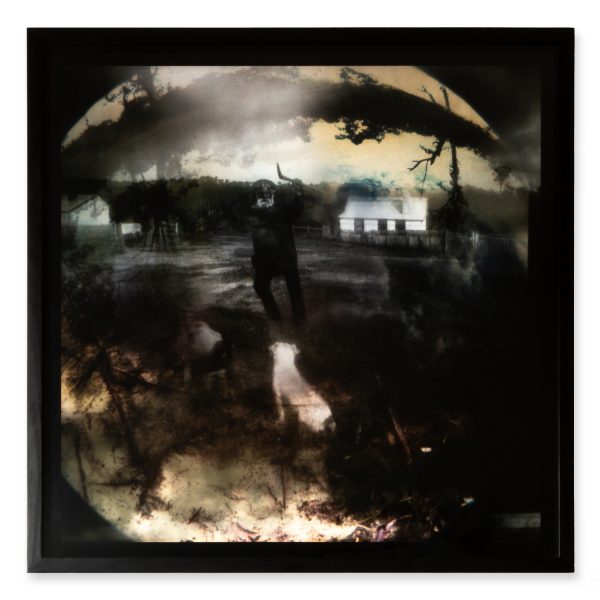 Type C photograph. 1020 x 1020 cm (image), in a black timber frame with Perspex by Chapman & Bailey. Number 3 from the first printing of the Patterns of connection series of 1991, printed in an unknown edition, the photographs not signed nor numbered, as issued. A second printing was completed in 2001 in an edition of 25 copies, signed and numbered verso.

Leah King Smith was the Stegley Foundation Koori photographer in residence, State Library of Victoria, 1990-91. She created her series of images Patterns of Connection utilising nineteenth century photographs of Aboriginal people housed in the Picture Collection of the Library. This arresting composition is based on a photograph of Aboriginal activist and leader William Barak holding aloft a pair of boomerangs at Coranderrk, Healesville, c.1900, by an unknown photographer. (call number H141205).

‘I was seeing the old photographs as both sacred family documents on one hand, and testaments of the early brutal days of white settlement on the othe … I was thus wrestling with anger, resentment, powerlessness and guilt while at the same time encountering a sense of deep connectedness, of belonging and power in working with images of my fellow Indigenous human beings.’ – Leah King-Smith, White apron, black hands, Brisbane City Hall Gallery, 1994, p. 7.

‘Leah King-Smith was born in Gympie, a Bigambul descendant who became a visual artist and lecturer in Brisbane. She studied fine arts and photography in the 1980s, and developed an interest in exploring issues of cultural discord in her art practice through her own family experiences. The 1991 series, Patterns of Connection, was developed after Leah was invited by the State Library of Victoria to select images for publication from the library’s collection of 19th century Aboriginal people. The photos produced in her several conflicting emotions: anger, resentment, powerlessness and guilt at the treatment of Aboriginal people in colonial Australia, together with ‘a sense of deep connectedness, of belonging and power in working with images of my fellow Indigenous human beings.’ She decided to adapt the photos to become a commentary on the colonial impact on Aboriginal culture.

In this series, King-Smith has superimposed archival images over her own photographs of the Victorian landscape. Parts of the image have been painted over, then the whole re-photographed and printed in large-scale Cibachrome. Her work was an attempt to recover Aboriginal people from the archives and reposition them in a positive, living, spiritual realm. She reunited figure and landscape to convey the importance of landscape to Aboriginal people, to reposition them in the foreground of their environment, with the negative connotations of mission, reserve and studio background pushed to the rear. ‘ Libby Stewart, Indigenous women artists: Leah King-Smith and Andrea Fisher, Museum of Democracy at Old Parliament House website, https://www.moadoph.gov.au/blog/Indigenous-women-artists-Leah-King-Smith-and-Andrea-Fisher/

Patterns of connection : an exhibition of photo-compositions. [Melbourne] : Leah King-Smith, 1992

Metamorphosis : contemporary Australian Aboriginal photography and sculpture. Curated by Gabrielle Pizzi. Melbourne, Vic. : Gabrielle Pizzi, 1997. Catalogue of an exhibition held at the Palazzo Papadopoli, Venice, 14 June – 13 July 1997, which included cibachrome photographs by Leah King-Smith from the Patterns of Connection series (Barak, as “Untitled no. 5”, is illustrated).