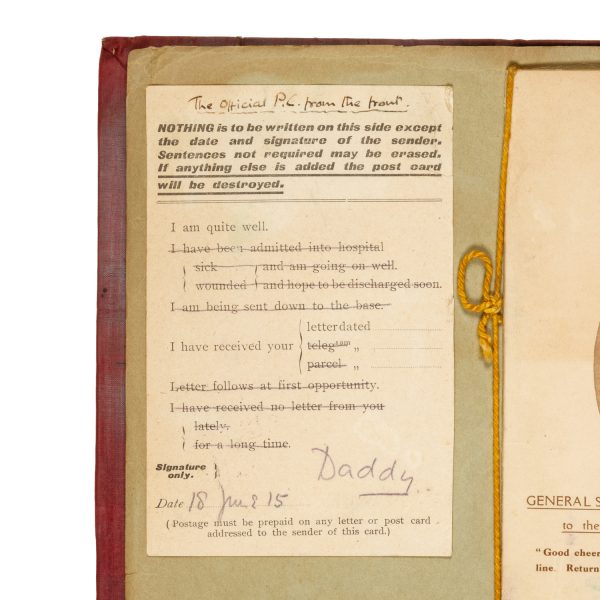 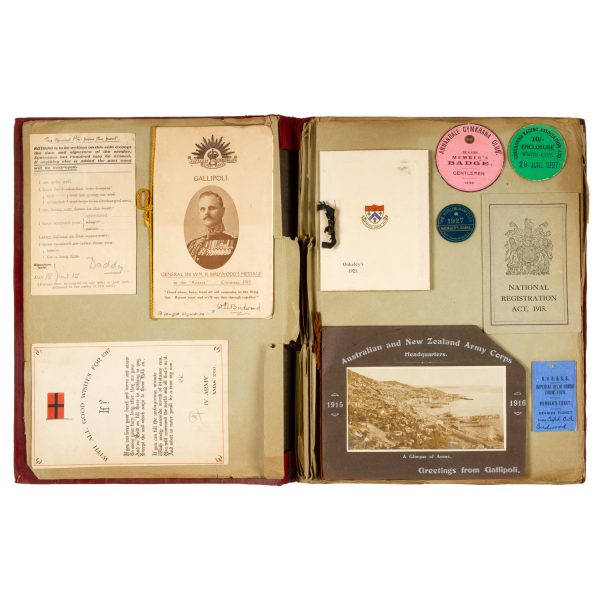 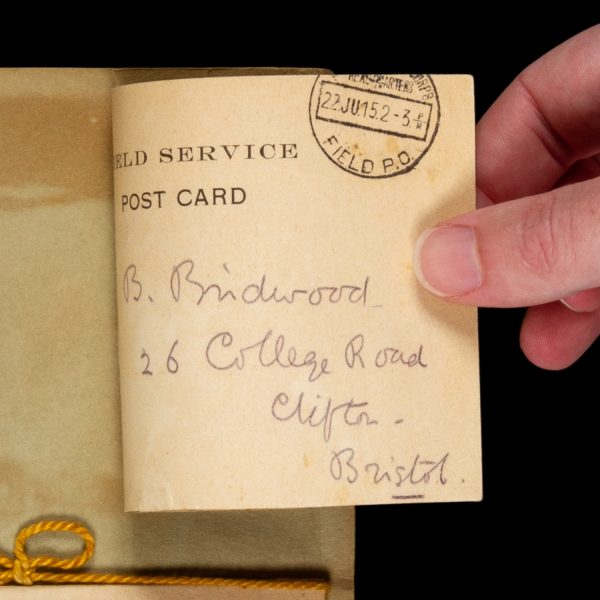 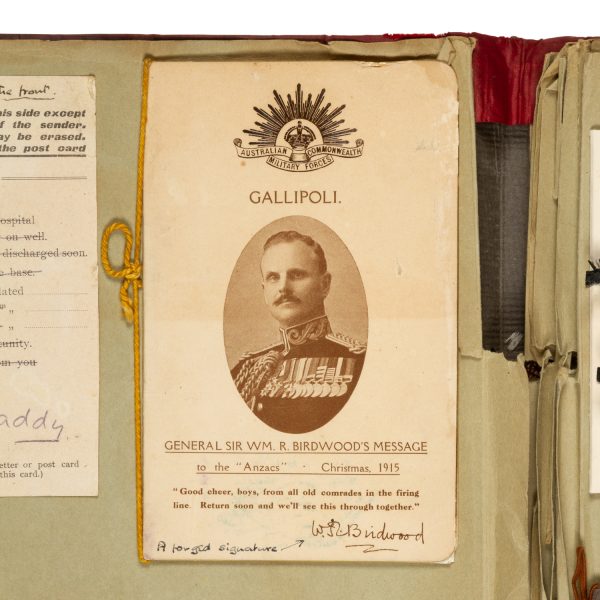 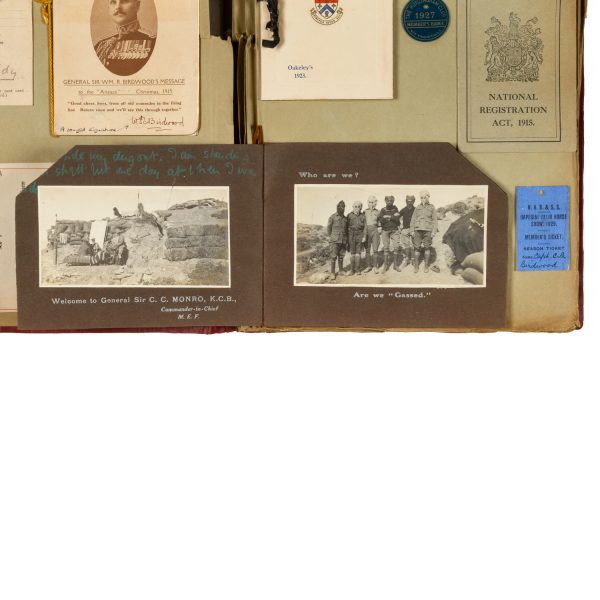 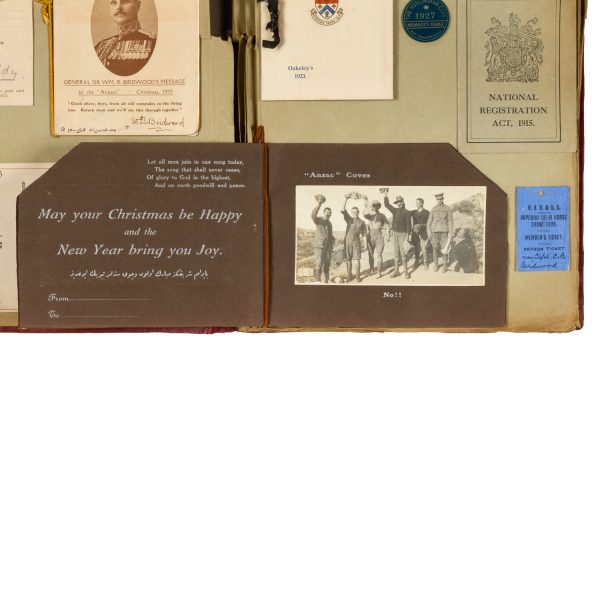 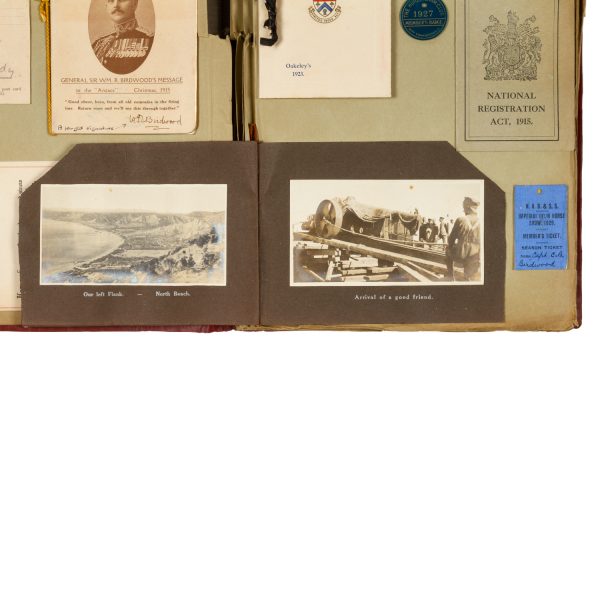 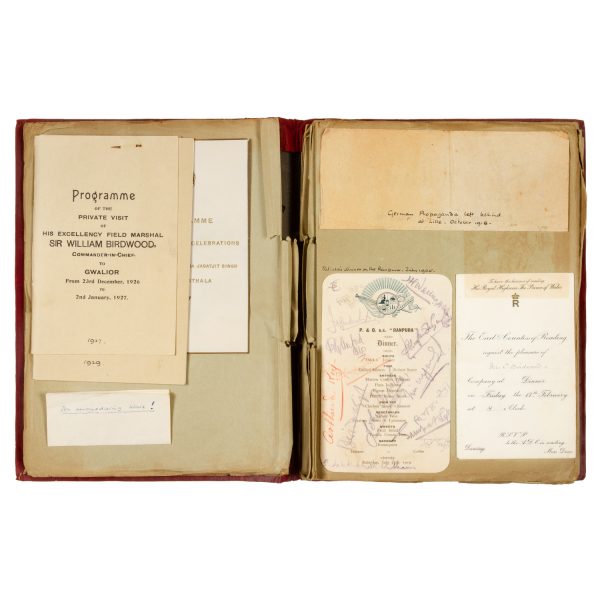 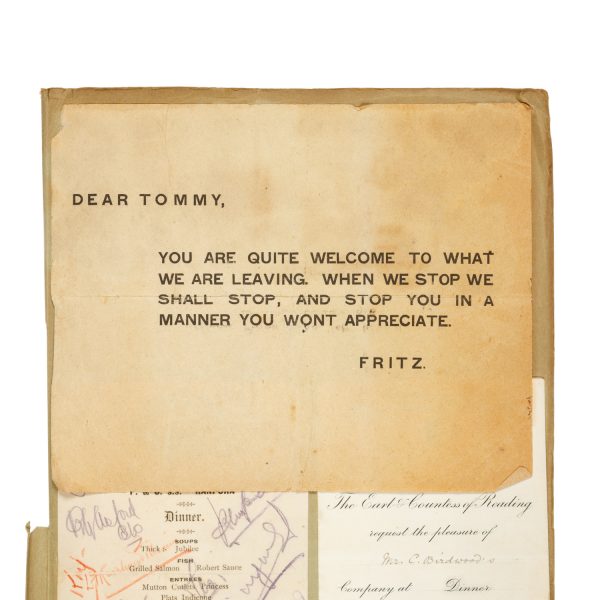 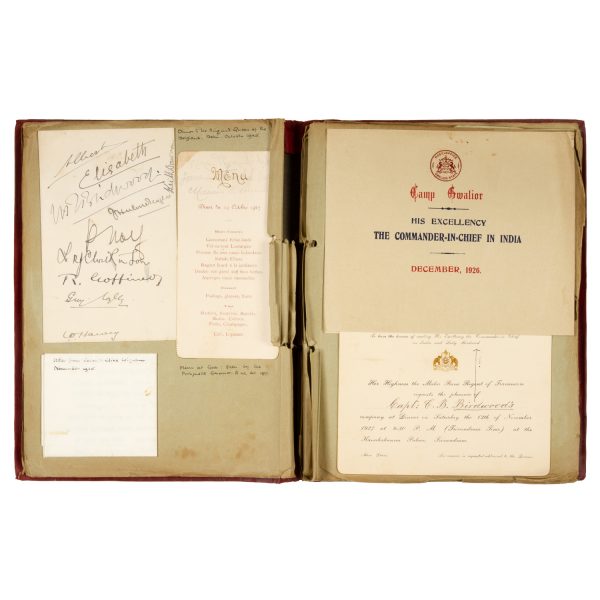 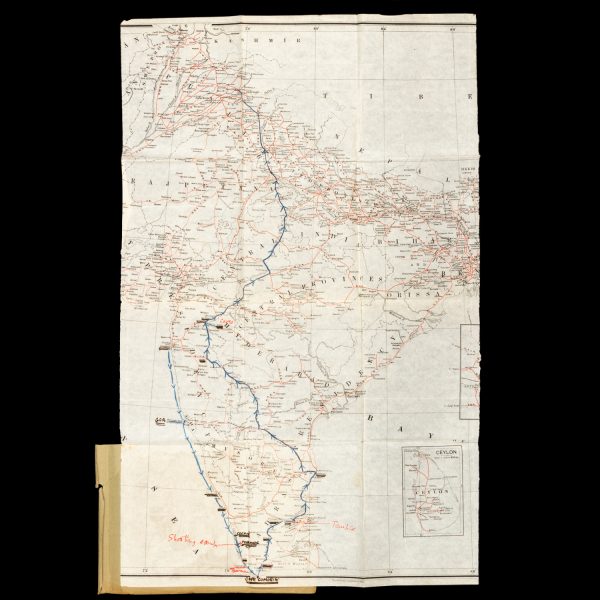 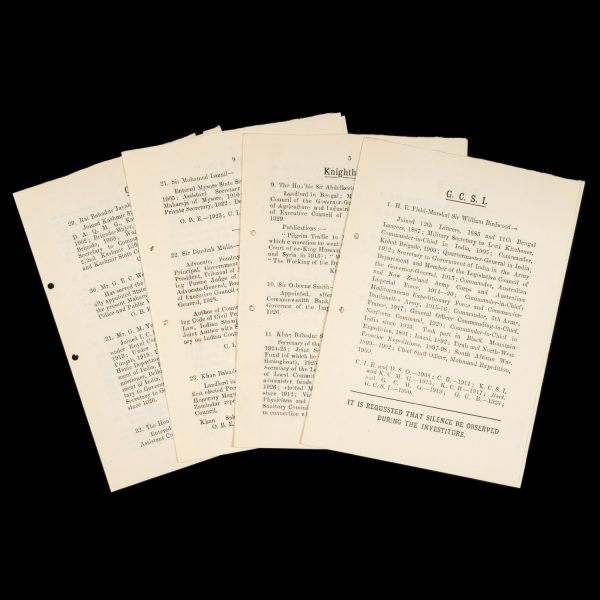 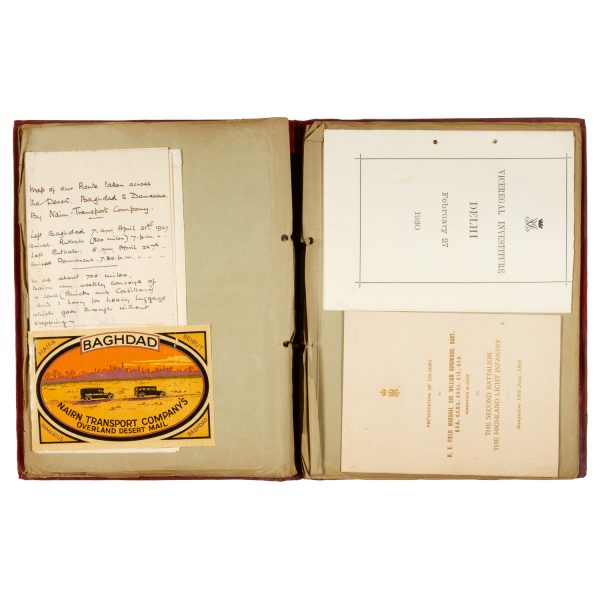 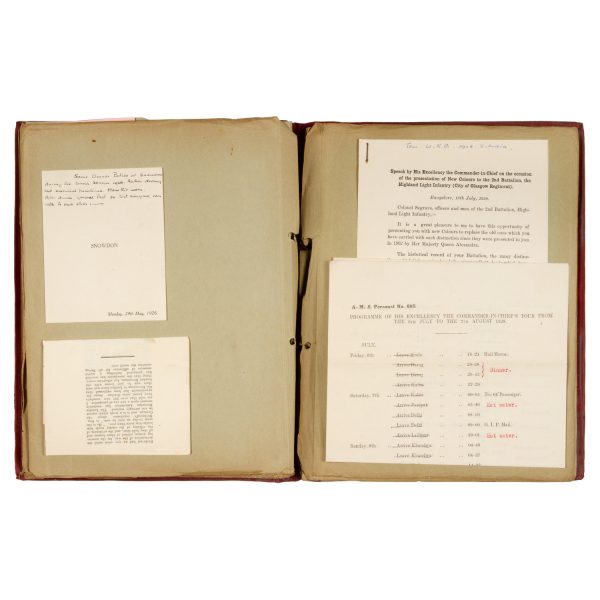 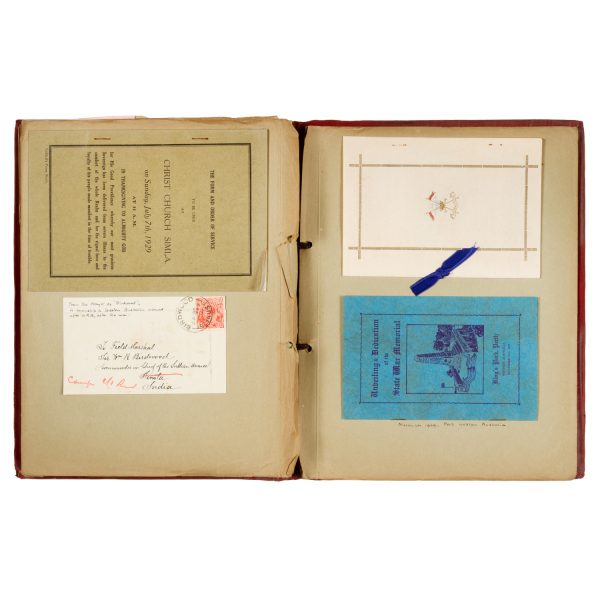 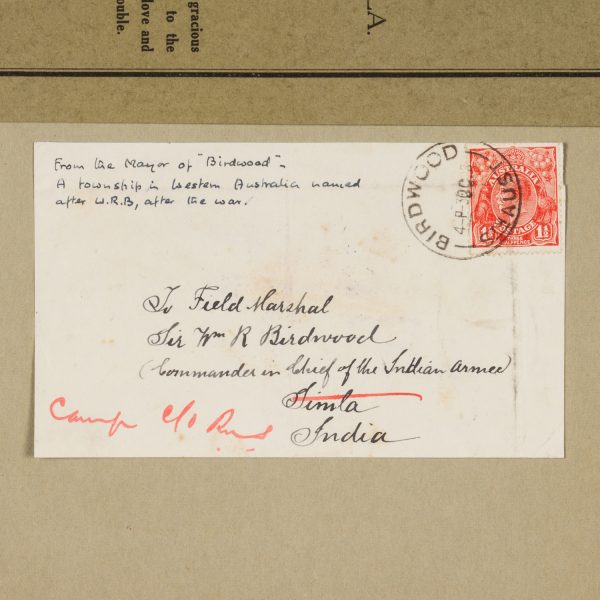 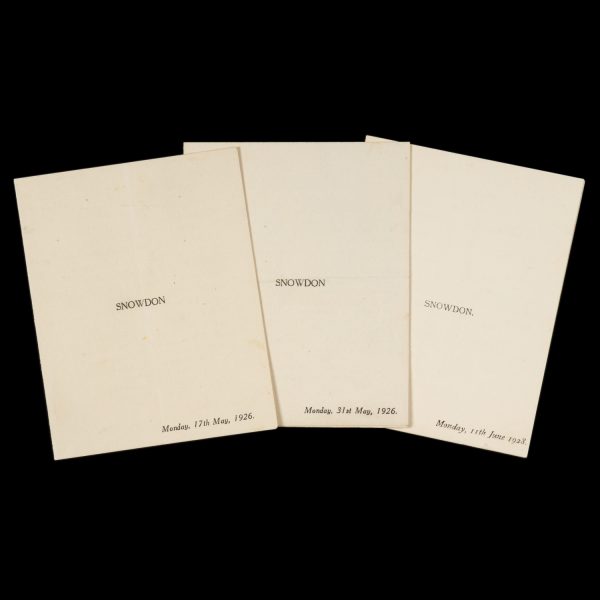 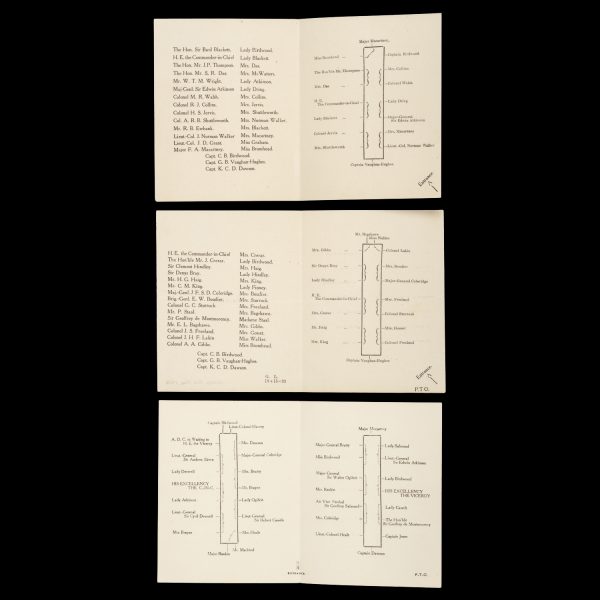 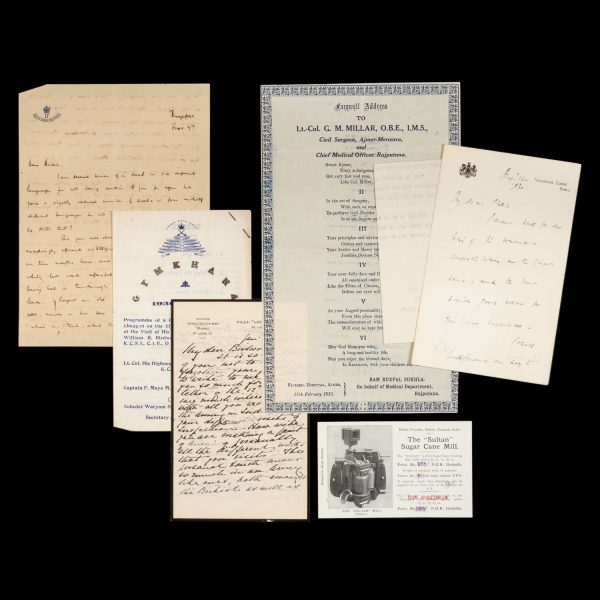 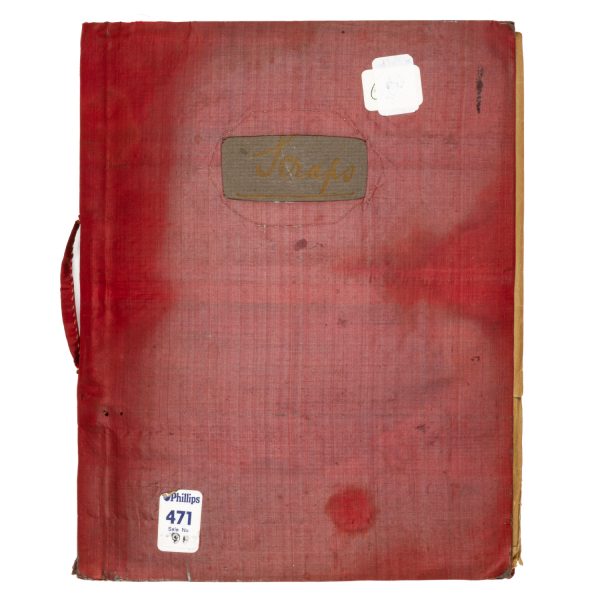 An important archive containing approximately 50 items of manuscript and printed ephemera (letters, maps, documents and photographs) pertaining to the military service of Field Marshal William Birdwood (1865-1951), commander of ANZAC at Gallipoli in the Great War, and of his son Christopher Bromhead Birdwood (1899-1962), who acted as the Field Marshal’s Aide-de-Camp in France while he was in command of the Australian Corps and 5th Army, and later in India when his father was in command of King Edward’s Own Probyn’s Horse. Compiled and annotated by Christopher Bromhead Birdwood, the personal memorabilia in this album was collected by both father and son and centres around their service in India. It also features rare photographs of the ANZAC Corps at Gallipoli, a postcard sent by the General Birdwood to his son from the Dardanelles in 1915, and several items which highlight the Birdwoods’ connections with Australia.

Quarto custom-made portfolio (300 x 240 x 25 mm), red satin hand-stitched over cardstock boards, with integral satin carrying handle, cut-out title window to front, and string-tied cardstock leaves; most leaves detached from string at perforations, otherwise the contents (all carefully mounted onto the album leaves) are in very good condition throughout, with no signs of foxing.

Field Marshal William Riddell Birdwood, 1st Baron Birdwood (1865-1951), was the British commander of the Australian and New Zealand Army Corps (ANZAC) for most of the Great War. He was in charge of the Gallipoli landings, having been put in command of the Corps on 25 April 1915. In September he took command of the entire British Dardanelles army, and thus oversaw the evacuation from the peninsula later in the year. On Gallipoli, Birdwood was generally regarded with affection by his troops.

After touring Australia to great acclaim in 1920, Birdwood became general officer commanding the Northern Army in India later that year. He was promoted to field marshal (with the corresponding honorary rank in the Australian Military Forces) on 20 March 1925, and, having been appointed a Member of the Executive Council of the Governor-General of India in July 1925, he was made Commander-in-Chief, India, in August 1925. Following his retirement from the service in 1930, Birdwood made a bid to become Governor-General of Australia. However, although he had the backing of the King and the British government, the Australian Prime Minister James Scullin insisted on the appointment of his Australian nominee, Sir Isaac Isaacs.

He was raised to the peerage in recognition of his wartime service as Baron Birdwood, of Anzac and of Totnes in the County of Devon, on 25 January 1938. Lord Birdwood died at Hampton Court Palace, where he lived in grace-and-favour apartments, on 17 May 1951. He was buried at Twickenham Cemetery with full military honours. The Australian Government still pays for the upkeep of his grave. He is chiefly remembered as the commander of the Australian and New Zealand Army Corps (ANZAC) during the Gallipoli Campaign of 1915.

Major Honorable Christopher Bromhead Birdwood, 2nd Baron Birdwood, MVO (1899-1962), who compiled the present scrapbook, was Field Marshal Birdwood’s son. He was a British hereditary peer, a soldier attached to the Probyn’s Horse regiment, and author. He was commissioned as a second lieutenant onto the Unattached List, Indian Army on 21 December 1917. In France, from 10 March 1918 to 28 February 1919, he was Aide-de-Camp to his father, who was the General Officer commanding the Australian Corps and 5th Army. For his service, he was mentioned in Despatches. Some of his British India Medals include: Mahsud 1919-20, Waziristan 1919-21, India General Service 1908-35.

CONTENTS OF THE SCRAPBOOK:

The ANZAC Regiment, created in 1914, was primarily comprised of troops from the First Australian Imperial Force and First New Zealand Expeditionary Force. It was commanded by Field Marshal General William Birdwood (who had the rank of General at the time of the Regiment’s formation). The scrapbook contains the following ephemeral items connected with this regiment, the first of which is the most emotionally charged item in the album – and, at least from an Australian perspective, the most symbolic:

Official field postcard from General Birdwood (who signs himself simply “Daddy”) sent from the Dardanelles, dated 18 June 1915, and addressed to his son C. B. Birdwood, 26 College Road, Clifton, Bristol (the card is tipped-in at the top edge, so the reverse can be read); with the printed line ‘I am quite well’ not crossed out (Birdwood has struck out the other options – that the sender is sick or wounded, or being “sent down to base”). Birdwood also indicates that he has received a letter from home. The top margin recto was annotated by C. B. Birdwood (some years later): ‘The Official P.C. from the front’.

Greetings from Gallipoli. Australian and New Zealand Army Corps Headquarters 1915-1916. Christmas and New Year greeting card, string-tied, [8] pp, printed silver lettering, with 6 (six) mounted original gelatin silver photographs (approx. 65 x 130 mm) of the ANZAC Corps at Gallipoli in 1915, one of which is annotated by Birdwood as being his own dug-out (shared with General Sir C. C. Munro); the card was issued by the Army for officers’ families.

Gallipoli. General Sir Wm. R. Birdwood’s Message to the “Anzacs”. Christmas 1915. Official Christmas card issued by the Australian Commonwealth Military Forces, [4] pp, string-tied, heavy cardstock with gilt edges, with an additional double-leaf colour lithograph illustration at centre “Coo-ee to Australia” by A. H. Fullwood; front with portrait of Birdwood, with Birdwood’s printed signature beneath (beside which Christopher has written “A forged signature”); Birdwood’s two messages are addressed to the soldiers and officers under him, and to the High Commissioner of Australia. There is also a message from Sir Ian Hamilton to the Prime Minister of Australia and to the Australian public, and finally a message to the troops from Australia’s Minister of Defence, Senator the Honorable George Foster Pearce

German propaganda leaflet, addressed to “Tommy” from “Fritz”, annotated by Christopher ‘Left behind at Lille, October 1918’. At that time, Christopher was serving with the Australian Army as Aide-de-Camp to his father General William Birdwood.

A trimmed envelope addressed to Field Marshal Sir Wm. R. Birdwood, Simla, India, from the Mayor of Birdwood (formerly Blumberg) in South Australia, a town which was named in Birdwood’s honour in 1917; with very clear “BIRDWOOD STH AUST” postmark, dated 1928.

The album contains many interesting ephemeral documents that reveal the continued admiration and respect towards Field Marshal William Birdwood as he served with the British Indian Army in the 1920s. As Commander-in-Chief, Field Marshall William Birdwood made annual tours in India. Occasionally, his son Christopher, serving with the regiment, was in the same region. Both he and his son received several privileged invitations from India’s elite rulers. The “Indian period” ephemera in the album are the following:

Printed invitation to Mr. C. Birdwood to attend a dinner hosted by the Earl & Countess of Reading [Rufus Daniel Isaacs, Viceroy and Governor-General of India, and his wife Alice Edith Isaacs, a prominent philanthropist in colonial India] to meet HRH the Prince of Wales [Edward VIII], on 17 February [1922].

Typed letter to Field Marshal Birdwood from Captain N. F. Laurence, R.N., Trincomali, 30 September 1925, to accompany souvenirs (a photograph and a piece of wood) from HMS Chatham, a ship to which Birdwood had a sentimental attachment and which was now destined to be broken up.

Menu for a dinner on board P. & O. SS Ranpura, July 25th 1925, signed by attendees, including Indian dignitaries.

A signed letter on Buckingham Palace stationery, 3 November 1925, to Field Marshal Birdwood from Colonel Clive Wigram, a British Army officer and prominent courtier then serving as Assistant Private Secretary and Equerry to the King [1910-1931], confirming that the King of England had personally read his letter regarding a member of the Calcutta Scottish volunteer regiment.

Programme of the Private Visit of His Excellency Field Marshal Sir William Birdwood, Commander-in-Cief, to Gwalior, from 23rd December, 1926 to 2nd January, 1927. 12-page pamphlet with titled wrapper. The events included a formal reception by the Maharaja Scindia and his highest leaders, bear hunting at Goras, tiger hunting at Patalgarh, a wedding reception, dance, and more. No detail was left unturned, and service was cared for with utmost detail, even having a military officer handle the ‘supervision of milk’. A special train was arranged ‘for the conveyance of servants, luggage and motors’ from Gwalior to Sheopur for a hunting expedition. The division of social classes is very evident with this travel itinerary.

Camp Gwalior. His Excellency, The Commander-in-Chief in India. December, 1926. Postal regulations in place during Birdwood’s visit.

[Address] To His Excellency Field Marshal Sir William R. Birdwood … [from] Members of the Cantonment Board & Citizens of Sauger Cantonment. 25th March, 1927. Gilt typescript folio document. [Sagar Cantonment, established in 1835, is a cantonment town in Sagar district in the Indian state of Madhya Pradesh].

Programme of Golden Jubilee Celebrations of His Highness Maharaja Jagatjit Singh of Kapurthala 1927. Gilt titled card with seating plan for all guests, which included among others, Sir William and Lady Birdwood, their son Captain Christopher Birdwood, the Viceroy and Lady Irwin, the Governor of Punjab, and many British and Indian notables.

Map of a Southern Indian Tour, October 1927. Christopher’s annotations reveal all places visited, including a shooting camp at Peermade, the southernmost tip of Cape Comorin, and, during a long inland journey, northwards to the Punjab, a visit to the Ellora caves.

Menu for the dinner in honour of ‘the King and Queen of the Belgians’. Delhi, 29 October 1927. Accompanied by a sheet bearing the signatures of dignitaries attending the function, including those of King Albert and Queen Elisabeth of Belgium, and W. Birdwood.

Printed invitation from the Maha Rani Regent of Travancore to Captain C. B. Birdwood, to a dinner in honour of His Excellency the Commander-in-Chief in India [Field Marshall Birdwood] and Lady Birdwood. 12th November 1927. (Christopher is invited to meet his own parents!)

[Annotated ‘Tour. W.R.B. 1928. Simla’]. Speech by His Excellency the Commander-in-Chief on the occasion of the presentation of New Colours to the 2nd Battalion, the Highland Light Infantry (City of Glasgow Regiment). Bangalore, 18th July, 1928.

A.M.S. Personal No. 683. Programme of His Excellency the Commander-in-Chief’s Tour from the 6th July to the 7th August 1928. A typescript folio programme details the Commander-In-Chief’s tour, departing from Simla, and visiting Delhi, Kadur, Bangalore, Mysore, Bandipur, Ootacamund, Ellore, Palasa, Puri, Gaya, Chandigardh, and several others places before returning to Simla.

Service for the Dedication of the Probyn’s Horse Memorial in the Cathedral of the Resurrection, Lahore. 9th February, 1929. Programme.

The Form and Order of Service to be used at Christ Church Simla on Sunday, July 7th, 1929 at 11 a.m. in Thanksgiving to Almighty God for His Good Providence whereby our most gracious Sovereign has been delivered from severe illness to the comfort of the whole Realm and for the signal love and loyalty of his people made manifest in the time of trouble.

Programme of a Gymkhana to be held on the Chougan on the 17th May 1930, on the occasion of the Visit of His Excellency Field Marshal Sir William R. Birdwood to Nahan [Sirmur].

A signed manuscript letter from Viceroy Irwin, Viceregal Lode Simla, to Christopher Birdwood, 14 August 1930, congratulates him on his engagement [to Elizabeth Vere Drummond Ogilvie, daughter of Lieutenant Colonel Sir George Drummond Ogilvie], ‘My dear Chris, I must write you… our warmest congratulations on the great news… wishes for your great happiness. I shall look forward one day to having the pleasure of making the Lady’s acquaintance…’

Four printed seating cards for dinner parties given at Snowdon, Simla, in 1926 and 1928, all attended by Captain Christopher Birdwood, who remarks in his annotation of one of them that they were ‘rather dreary but essential functions. Mess kit worn. After dinner, General Post so that everyone can talk to each other.’ Christopher travelled rather extensively, his experience in India being a combination of military work and exclusive dinner engagements. A few documents in this album reveal that he was in Simla, in the Himalayan foothills, as early as 1919. His regiment appears to have returned to Simla annually in the springtime. He also annotates a supper menu from a Black and White Ball hosted by the Wazir Force in Gulmarg in 1920.

Membership badge for the Hurlingham Club, 1927. [C. B. Birdwood]