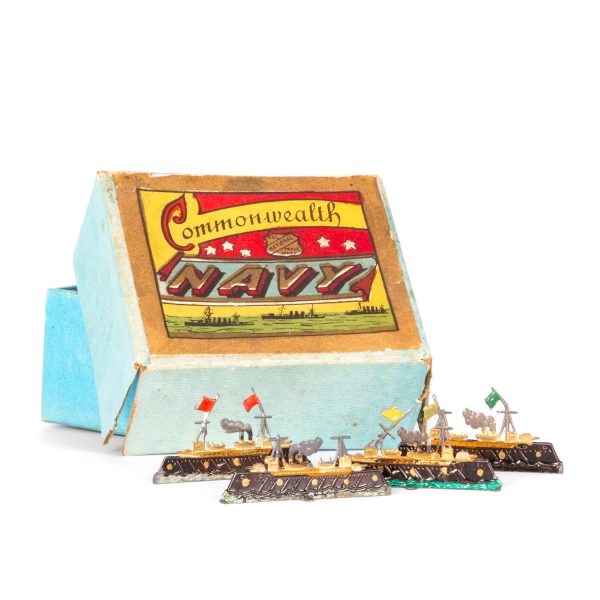 An up-to-date game in naval maoeuvres. [Melbourne] : The National Game Company, [circa 1913]. Lithographed game board featuring illustrations of HMAS Australia, HMAS Warrego, HMAS Melbourne, HMAS Yarra, HMAS Sydney, and the Australian coat of arms; 365 x 365 mm, folding to 365 x 182 mm; pictorial title label to outer board; in fine condition; accompanied by the original card box for playing pieces, 90 x 75 x 40 mm, pictorial label to lid (splits to sides), containing all four of the original painted lead battleship playing pieces (a couple have lost one or more of their flags) and the original rules sheet (folding), as well as three stray playing pieces from the Antarctica board game published by National in the same year.

A beautifully designed Australian board game which celebrated the recent birth of the Royal Australian Navy in 1911. (Construction of HMAS Melbourne was completed on 18 January 1913, the same day Melbourne was commissioned into the RAN. She arrived in Fremantle in March, 1913).

Rare, especially in this condition and with the original playing pieces.

The ships always move one square at a time, along the course, in a clockwise direction. The four squares, colored Red, Blue, Green, and Yellow are the starting points, or Stations, from which the Ships commence their practice.Each player in turn rolls the die or spins the teetotem and counts the number in following the arrow. If the end result is a square with a number the player score that value and then moves to the next square.

When all players have gone through 36 stations the player with the highest score wins.’