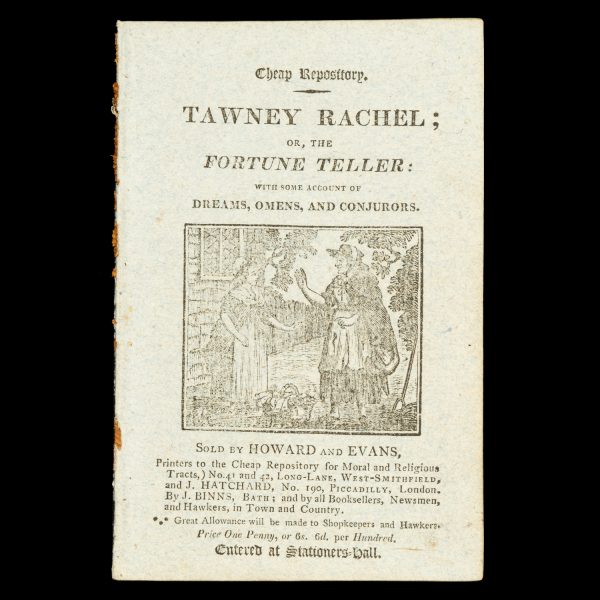 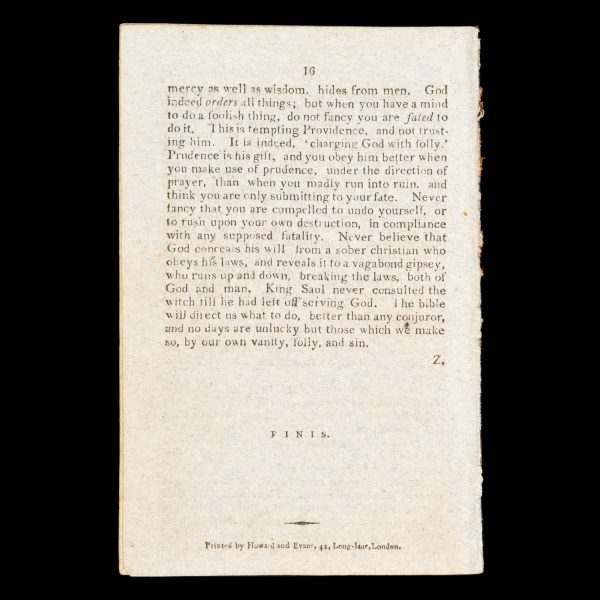 [BOTANY BAY] Tawney Rachel; or, The Fortune Teller: with some account of dreams, omens, and conjurors.

Tawney Rachel is one of numerous reformist tracts written in the eighteenth century by the evangelist Hannah More (1745-1833), issued in a series known as the Cheap Repository Tracts. Printed in chapbook format and sold at a penny each (or 6s 6d per hundred) by ballad-sellers and chapmen, these tracts were intended to inspire moral improvement and to discourage political dissent. Many of these tracts – including the present example – were signed with Hannah More’s nom de plume, “Z”.

The eponymous protagonist is the wife of a Somerset poacher, Black Giles (himself the subject of two other tracts). The pair are depicted not only as wicked – the whole family maintains themselves ‘by tricks and pilfering’ – but also lazy, since ‘regular labour and honest industry did not suit their idle habits’. Rachel travels the countryside with a basket on her arm, on the pretence of hawking lace and pamphlets, but her ulterior motive is to gain entry into houses, where she profits from people’s ignorance and gullibility by telling fortunes, employing the charade of sham witchcraft to bamboozle her unwitting customers and swindle them out of their money. This guise is also suited to opportunistic theft, but Rachel is undone when she steals a silver cup from one of these houses and sells it to a pawnbroker: she is quickly impeached, found guilty and sentenced to transportation to Botany Bay. At around the same time, her husband suffers an agonising death while committing a robbery. Both characters – as archetypes of evil – are satisfyingly punished by providence.

The writer begins her concluding remarks by spelling out the moral of the story: ‘I have thought it my duty to print this little history, as a kind of warning to all young men and maidens not to have anything to say to cheats, impostors, cunning women, fortune-tellers, conjurers, and interpreters of dreams.’

Tawney Rachel was printed by the Cheap Repository in many editions, from 1797 up until 1839; an edition was published by the Society for Promoting Christian Knowledge as late as 1842. The present example has an imprint which is not found in OCLC, but it varies in only one minor detail from the 1801 edition which has Samuel Hazard as the Bath bookseller, rather than John Binns. The Women’s Print History Project database cites a copy with this imprint in the British Library, which the BL dates to 1813 (BL4418.ee.96.20); this accords with the fact that John Binns took over the business of his father-in-law, Samuel Hazard, following his death in 1806.

Rare. Not in Ferguson.

Australian holdings: Trove locates only an example of a Dublin edition (UQ) and a copy of the 1842 SPCK edition (NLA).