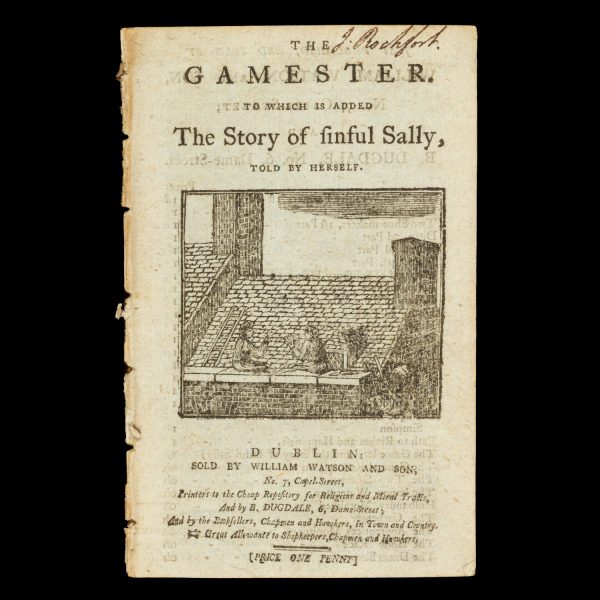 [BOTANY BAY] The Gamester. To which is added the story of sinful Sally, told by herself.

Dublin : Sold by William Watson and Son, No. 7, Capel-Street, Printers to the Cheap Repository for Religious and Moral Tracts, and by B. Dugdale, 6, Dame-Street; and by the Booksellers, Chapmen and Hawkers in Town and Country, circa 1796. Octavo, self-wrappers with woodcut illustration to front, pp 23, [blank]; disbound from a larger volume, stab-stitch holes to gutter; previous owner’s name to first leaf, a fine copy.

A rare early transportation chapbook containing a fictional account of a tiler who, addicted to gambling, resorts to pickpocketing. He is apprehended, convicted at the Assizes, and sentenced to death. His sentence is, however, commuted to transportation to Botany Bay in New South Wales. Not in Ferguson.

‘The story of poor Tricket the gamester, shewing how he first lost his place by gaming, and then had well nigh been the death of his wife through the same cause, and how lastly, his gaming was the occasion of his being transported as a convict to Botany Bay.’ (p. [3]).

Even though it is Tricket who must face the direct consequences of his actions, his wife is also forced to suffer terribly for his irresponsibility and crime: ‘The fear of death at first made even Botany Bay appear a deliverance, but when he was to depart thither, bitter indeed, was the affliction of his faithful wife; for since he had appeared a penitent she had become so much endeared to him, that all his past injuries being quite forgotten, his leaving her was worse than death’.

No copies recorded in Australian collections.