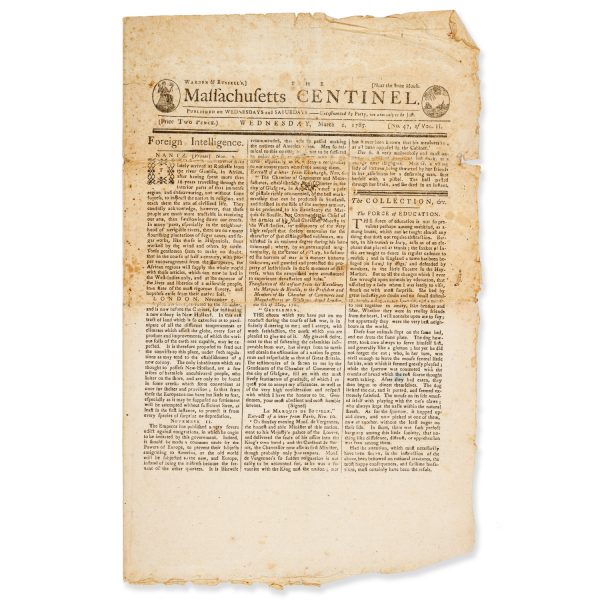 A rare contemporary account of the plans of the English to colonise New Holland, printed nearly three years prior to the arrival of the First Fleet.

The Massachusetts Centinel was an influential Federalist newspaper, described as ‘the most influential and enterprising paper in Massachusetts after the Revolution’, published by noted Federalist Benjamin Russell, the byline in the masthead stating: “Uninfluenced by Party, we aim to be JUST’. This issue contains letters to the editor, editorials, and a note that the federal Congress is removing to New York for its next session. The second article is news from London dated November 4, [1784], announcing a plan is before Cabinet to institute a new colony in New Holland, as a proposed convict settlement. ‘The only inhabitants which are thought to possess New-Holland are a few tribes of uncultivated people, who loiter on the shore, and are only to be found in some creeks which seem convenient at once for shelter and provision; so that from there the Europeans can have but little to fear, especially as it may be supposed no settlement will be attempted without sufficient force, at least in the first instance, to protect it from every species of surprise or depredation’.

With Britain losing most of its North American colonies during the American Revolutionary War (1775–1783), plans were made to colonise new territories as penal colonies. In 1779, Sir Joseph Banks recommended Botany Bay as a suitable site for settlement, saying that “it was not to be doubted that a Tract of Land such as New Holland, which was larger than the whole of Europe, would furnish Matter of advantageous Return”. With the assistance of James Matra, a proposal was written for the settlement in 1783, and presented to Cabinet in 1784. In November 1784 the London newspapers were reporting plans for settlement (Whitehall Evening Post, 4 November 1784), which would then be reprinted in the overseas press, such as the Gazzetta Universale (Florence), 30 Novembre 1784, p. 765; The Pennsylvania Gazette, 26 January 1785; The Weekly Monitor (Litchfield, Massachusetts), 1 February 1785; The United States Chronicle (RI), 24 February 1785; and The Massachusetts Centinel, 2 March 1785.