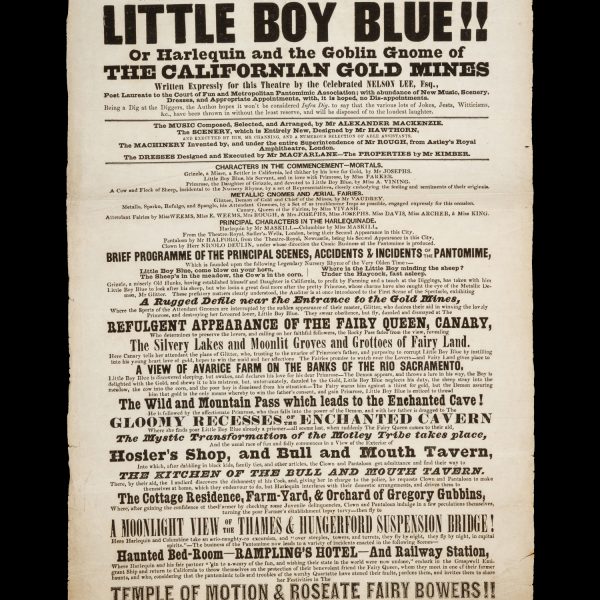 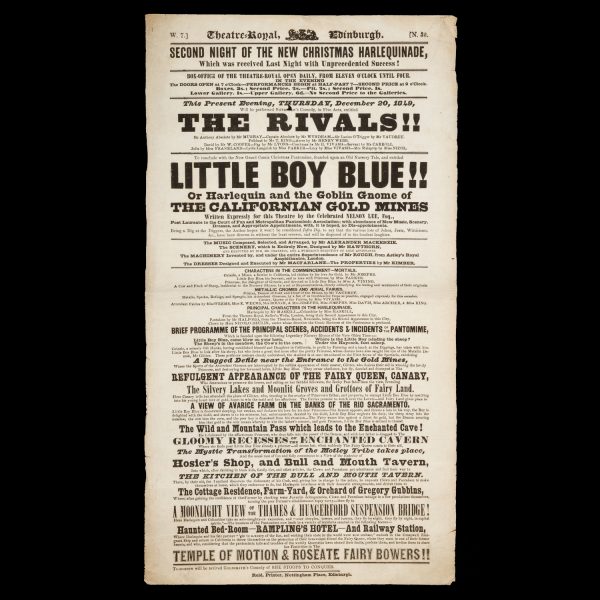 [CALIFORNIA GOLD RUSH] Theatre-Royal, Edinburgh. Second Night of the New Christmas Harlequinade . . . Thursday, December 20, 1849, Will be Performed . . . The Rivals!! . . . To conclude with the New Grand Comic Christmas Pantomime … entitled Little Boy Blue!! Or Harlequin and the Goblin Gnome of the Californian Gold Mines.

Written expressly for this Theatre by the Celebrated Nelson Lee, Esq., Poet Laureate to the Court of Fun and Metropolitan Pantomimic Association … … Edinburgh : Reid, Printer, Nottingham Place, 1849. Playbill, 430 x 235 mm; printed recto only; despite being printed on cheap, thin paper the broadside is remarkably well preserved: a little dusty and with a small spike hole towards the top edge, but no tears or significant creasing.

This 1849 Scottish playbill for a satirical production based around the Californian Gold Rush, which had commenced in the previous year, is a good example of how this event had so quickly become a truly world-wide phenomenon.

The pantomime Little Boy Blue was the headline attraction in the Theatre Royal’s evening of Christmas entertainment. “Being a Dig at the Diggers, the Author hopes it won’t be considered Infra Dig to say that the various lots of Jokes, Jests, Witticisms, &c. have been thrown in without the least reserve, and will be disposed of to the loudest laughter”. The play featured a character named “Grizzle, a Miser, a Settler in California, led thither by his love for Gold”, alongside nursery-rhyme and fantastic characters such as “Glitter, Demon of Gold and Chief of the Mines” and “Metallo, Sparko, Refulgo and Spanglo, his Attendant Gnomes”. The scenery certainly provided plenty of Californian flavour, and included “A Rugged Defile near the Entrance to the Gold Mines”, “A View of Avarice Farm on the Banks of the Rio Sacramento”, “The Wild and Mountain Pass” and the “Bull and Mouth Tavern”.