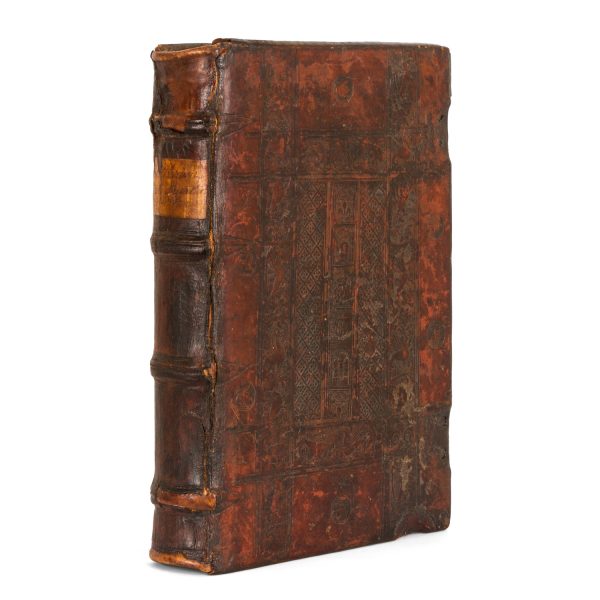 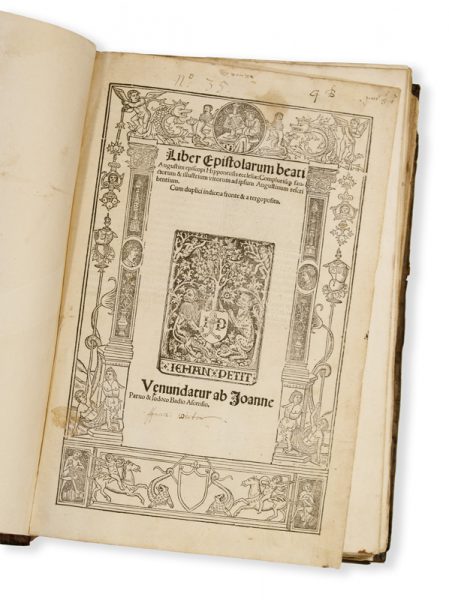 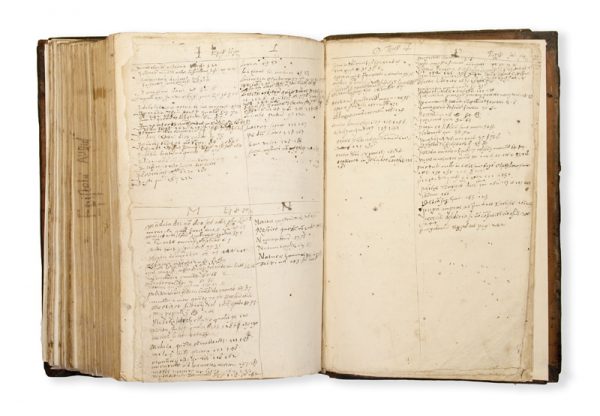 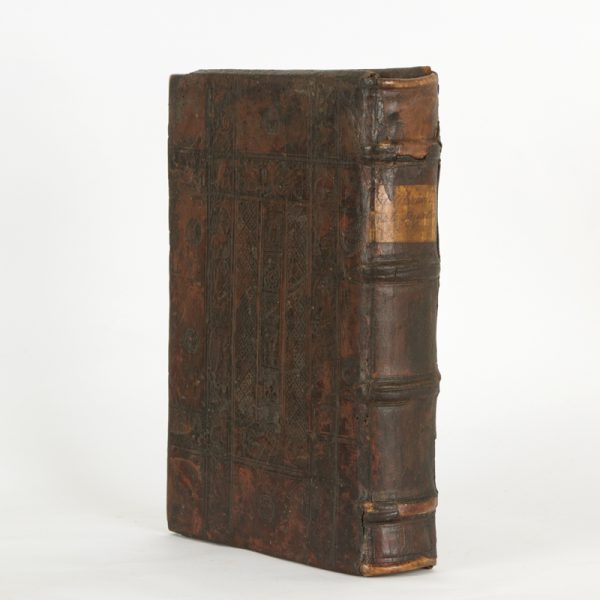 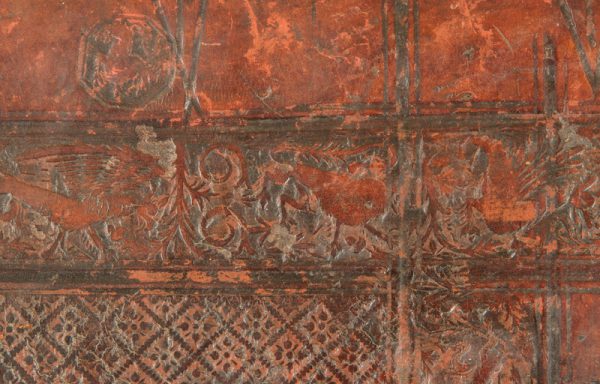 Folio, ff. [viii], CCLXII, [31] (lacking last blank); title-page within a large historiated woodcut border enclosing the printer’s device, many criblé initials throughout; a few minute pinhead wormholes scattered through the second part, a slightly larger one in quire f (not impairing legibility); in a contemporary Cambridge binding by Garret Godfrey of calf over wooden boards, the covers panelled in blind with a roll featuring a griffin, wyvern and lion, signed with the initials GG (Oldham, English blind-stamped bindings, no. 503), the centre occupied by two vertical rolls of quatrefoils in lozenges (ibid, no. 593) flanking a single vertical roll heraldic ornament: a gateway, fleur-de-lis, pomegranate and rose (ibid, no. 746); several impressions of an octagonal lion stamp in the margins outside the panels (not in Oldham); manuscript fore-edge title; wanting the two sets of clasps and catches, some chips at extremities and one or two small dents in the panelling, portions of the lower side sprinkled with pinhead wormholes; rebacked, preserving the original spine, portion at head renewed; new end-papers; contemporary signature ‘ffran: wictor’ at foot of title, and shelf-mark ‘No. 35’ in the upper margin; early 17th century initials GB, with price ‘pret 3s. 4d.’;  manuscript numbering to the initial printed content register; four leaves bound in at end, containing an extensive manuscript index of subjects and loci, dated 12 March 1602/3.

Saint Augustine (354 – 430 C. E.) was a highly influential early Christian theologian from Hippo (now Annaba, Algeria), part of the Roman provinces in North Africa. His writings (in Latin) on the concepts of original sin, just war, and the Church as the City of God would influence Christianity through the medieval period and continue to have resonance in canonical teachings today. Augustine’s teaching style was didactic, and radically different to that of his peers. He is also considered an important influence in the history of pedagogy. Augustine is the patron saint of brewers, printers and theologians.

After the advent of printing, Augustine’s texts went though numerous editions, and still remain in print. This early post-incunabule edition of his works is rare, held in only a handful of libraries worldwide.

The binding is a significant example of the craftsmanship of Garret Godfrey, active as a bookbinder at Cambridge University from 1502 until his death in 1539. Born in Limburg in the Netherlands, he is thought to have gone by the name Garrett van Graten. In Cambridge he lived at the parish of St Mary’s, later serving as Churchwarden along with his contemporary colleague Nicholas Spierinck. Godfrey’s distinctive tooled rolls show the emblems of a wyvern, griffin and lion, along with the initials G G indicating the book came from his workshop. Godfrey was later to give some of his tools to Spierinck, who replaced these with his own initials N S.

At least fourteen Godfrey bindings have been internationally recorded with the G G initials (see: Six Centuries of Master Bookbinding, Bridwell Library, 9 February – 29 April 2006, cat. 5). Along with Spierinck and another binder, Segar Nicholson, Godfrey was appointed one of the first  official University Printers and Stationers at Cambridge in 1534.

This late medieval folio, with its dramatic tooling, relates closely to a Spierinck binding held at the Baillieu Library, showing similar tooling. Both works date from circa 1520, and together allow comparison and representation of the two great known binders of Cambridge’s early history.

There are no known Godfrey bindings or copies of this edition of Augustine in Australian collections.