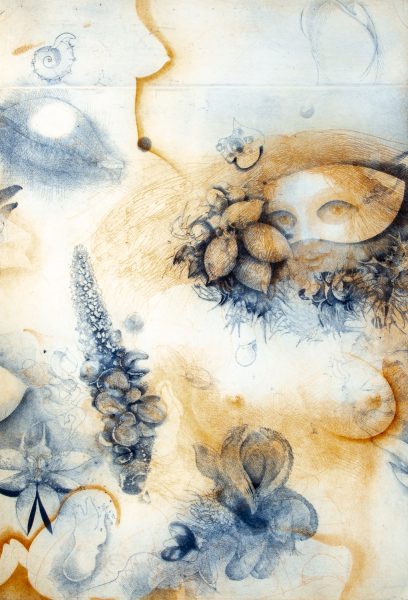 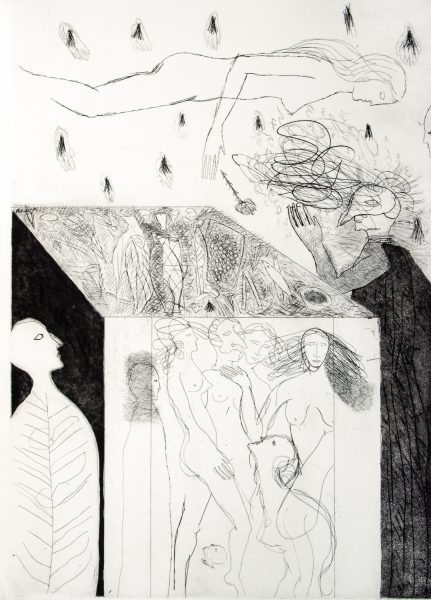 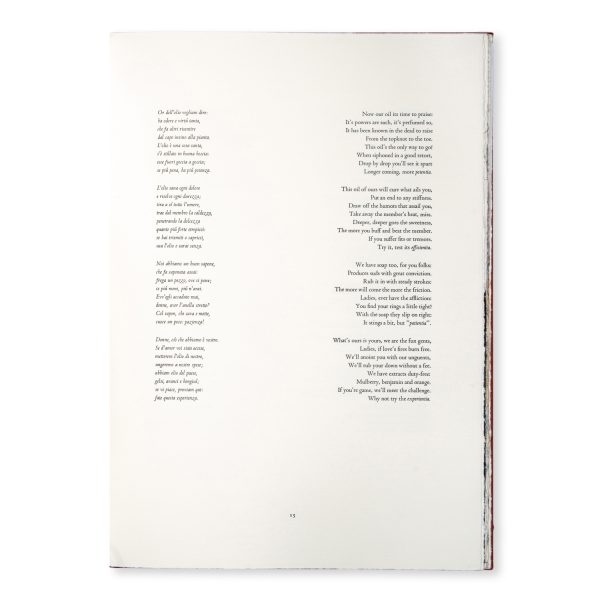 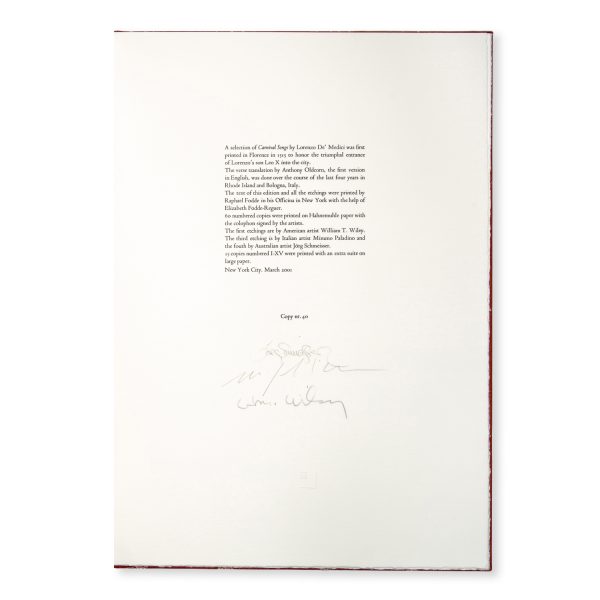 The following review by Normana Wight was published on the website of the State Library of Queensland:

‘Carnival Songs’ is a deluxe large format artists’ book of the ‘Livre d’artiste’ type; a type of book first produced in Europe in the nineteenth century, and still occasionally made these days to bring together the work of an artist and a writer in a sumptuous production, that recalls the most luxurious of some earlier books since the invention of movable type.

This book is an American twenty first century English translation of Tuscan- Italian songs written by Lorenzo de’ Medici – ‘Il Magnifico,’ for performance at the 15th century Florentine blow-outs that typically preceded the period of Lent.

The book was first printed in 1515 to honour the triumphal entrance of Lorenzo’s son, Pope Leo X into the city. This is ironic considering the Christianity of it all. ‘The Flesh’s Last Fling’ – When, in the build-up to Ash Wednesday, Christians would party and perform, and sing lewd and risqué songs before the 40 days of Lent with its theme of restrictions and denials, which eventually lead to the celebrations of Easter.

This beautiful, large scale book is the epitome of plush book production. It is exciting to see links with the craftsmanship of past centuries; the embossing of the letterpress printed text on the soft rag paper, the leather spine, gold and red cloth covers and deckle edges. You might be transported to the sixteenth century, except for the translation into modern day colloquial American. (What is a Krumkake?) And the large freely drawn late twentieth century etchings, which catch a mood rather than act as illustration. Lorenzo’s lewd and risqué 15th century songs make one think of 20th century American blues and rock songs with their popular appeal and hidden meanings- (double entendre.) They are sheer joy and entertainment and bring on a snigger or a giggle. Students of Italian will love to read them as they are short, direct and easy to understand. (Almost like a recipe book.)

Carnival Songs (Canzoni Canascialeschi) is printed in the original fifteenth century Tuscan Italian (in Italics) side by side with the modern translation, made by Anthony Oldcorn.
The large format book was published in New York by Raphael Fodde in 2001. It is illustrated with etchings by American artist William T. Wiley, (two hilarious etchings in his wiry distinctive linear style), Italian artist Mimmo Paladino, (a strongly tonal etching which directly recalls the paganism of early Italy) and Australian artist Jorg Schmeisser, (a delicately drawn colour etching in his characteristic style that recalls the techniques of Leonardo’s drawing). – http://blogs.slq.qld.gov.au/ala/2013/08/01/carnival-songs-lorenzo-de-medici-1449-1492/