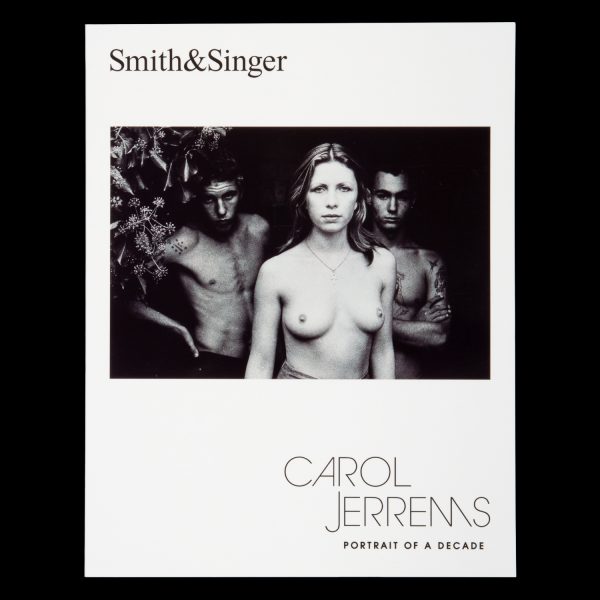 Carol Jerrems : portrait of a decade

“Carol Jerrems: Portrait of a Decade

Smith & Singer – formerly Sotheby’s Australia – is honoured to host the most comprehensive and fully documented commercial exhibition of Carol Jerrems’ work ever held.  Carol Jerrems: Portrait of a Decade will be presented in Smith & Singer’s Melbourne premises from 27 February – 20 March 2020, before touring to our Sydney galleries from 26 March – 17 April 2020.

The 26 works in the exhibition trace the extraordinary iconography of one of the most revered and rarest of all Australian photographers, who in her brief but intense career, produced gritty and luminous images that continue to challenge and inspire. Bookending a decade, these highly personal and purely figurative compositions include some of the most sensitive, revealing, forceful and compelling images of ‘Living in the Seventies’ in Australia. (1)

Geoffrey Smith, Chairman of Smith & Singer commented:  ‘We gratefully acknowledge the existing and continued research undertaken by numerous individuals and organisations on Carol Jerrems, and in particular the assistance of Helen Ennis, Natalie King, and Gael Newton AM, in preparing this catalogue.

Carol Jerrems: Portrait of a Decade honours and celebrates the 40th anniversary of Jerrems’ death on 21 February 1980, aged 30. We hope that this exhibition reaches new national and international audiences and ignites their interest and appreciation for this remarkable Australian artist.’

(1) This phrase, the title of Melbourne band Skyhooks’ debut album and hit single of 1974, was also the title of a touring exhibition of Jerrems’ work organised by the Australian National Gallery in 1990-1991” – Smith & Singer website https://www.smithandsinger.com.au/catalogue/AU0842