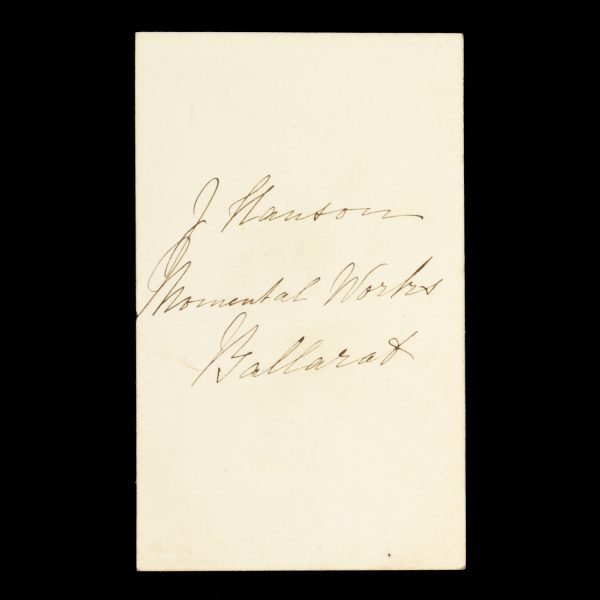 Carte de visite commissioned by monumental mason J. Hanson of Ballarat to advertise his work, showing the headstone in the Old Ballarat Cemetery erected to the memory of the children of John and Mary Little.

This incredibly sad little carte de visite photograph reminds us that in the nineteenth century the spectre of death hovered over infants and older children constantly. The main killers in the Australian colonies were measles, scarlet fever, and diphtheria, and these diseases did not discriminate on grounds of race: the mortality rates of European, Chinese and Indigenous children were shockingly high.

John Little arrived in Port Phillip from Cumberland in the far north of England at the very end of 1851, when he was already 40 years old. He brought with him his wife Mary (née Grave) and the couple’s first two children, William and Mary Jane. John evidently had reasonable success on the goldfields as he was soon able to settle with his family in Geelong (where his brother William also resided) and open his own stationery business in Moorabool Street. By the end of the 1850s John had taken his family up to Ballarat where his occupation is later listed as “toy seller”. How ironic was this choice of occupation – since only two of John and Mary’s nine children had survived beyond early childhood! Mary died in December 1882, and is buried in the Old Ballarat Cemetery. Her death certificate records her issue at time of death as: William 44. James decd. Mary Jane decd. John decd. Robert decd. Mary decd. John Benjamin decd. Jessie decd. Ada 21 years.

We believe the present carte de visite was commissioned by sculptor and monumental mason J. Hanson – later of the firm Hanson Brothers, Creswick Road, Ballarat – to give to prospective clients as an advertisement for his work.