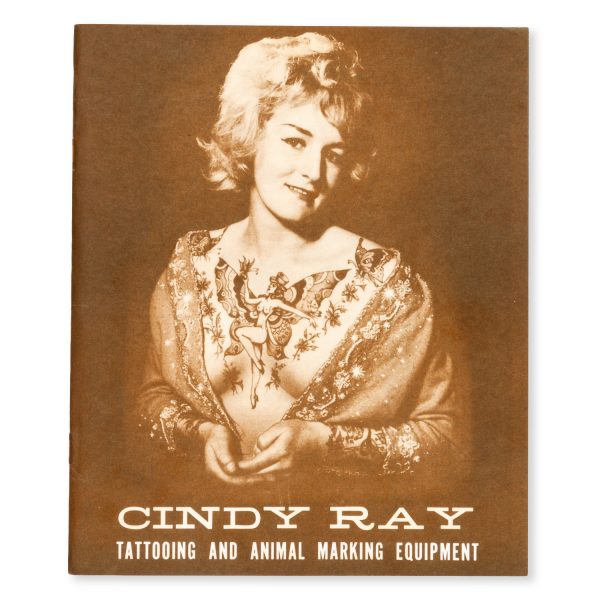 [Drop title]. Ivanhoe, Vic. : Miss Cindy Ray, [1964 or 1965]. Large square octavo (205 x 170 mm), original pictorial wrappers, staple bound, pp 16 (including wrappers), illustrated; a superb copy; [TOGETHER WITH] loosely enclosed roneo-printed Mail Order forms for Cindy Ray’s equipment and collectors’ cards; a roneo-printed open letter from Cindy Ray to her customers asking for their support to help fund the publication of her second book; and a self-addressed airmail envelope for orders placed by return mail, with numerous printed address labels for the customer to fill in and return inside the envelope; all in very fine condition.

Extremely rare Cindy Ray tattooing equipment catalogue, issued shortly after the publication of her first book, How to do good tattooing (1964), but prior to the appearance of her second book, The story of a tattooed girl (1965). Trove locates no copies.

The loosely enclosed commercial ephemera was included by Cindy Ray when she sent out the catalogue, and it is equally as scarce and – from a researcher’s point of view – probably just as significant as the catalogue itself. It comprises a two-page Order Form for equipment described and illustrated in the catalogue (prices, as in the catalogue, are given in both Australian pounds and US dollars); a three-page foolscap folio Mail Order Form which very helpfully lists the entire inventory of Cindy Ray’s collectors’ cards (with a wide range of images, not just of tattooing subjects but also pinups, sports personalities, recording artists, film and television stars, cars and humour); and, perhaps most importantly, Cindy Ray’s letter headed “Your Assistance Would Be Appeciated”, in which she explains that she cannot afford the high costs of printing her second book and therefore seeks her clients’ and fans’ support by asking them to provide names and addresses of prospective customers and to recommend publications in which she can advertise her business in or outside Australia.

Cindy Ray is the pseudonym of Beverly Robinson, later Beverly Nicholas, the legendary Australian tattoo artist. She is famous not only for being one of the earliest known female tattoo artists, but also as a tattoo model who marketed her images and tattooin equipment by mail order all around the world.