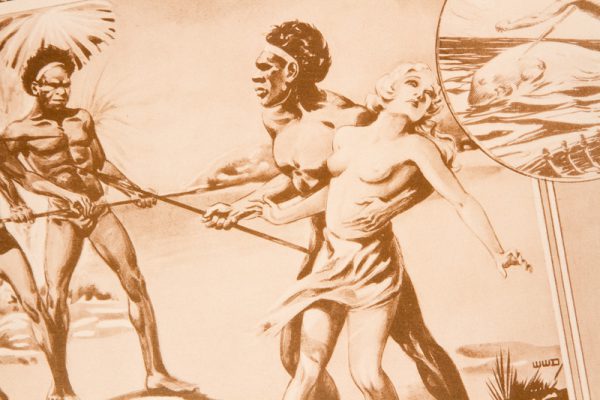 ‘In 1928 the Australian racial psychologist Stanley David Porteus went to northwest Western Australia and central Australia to conduct psychological and psychophysical studies of sample Aboriginal groups. Porteus was accompanied by Paul Withington, a Honolulu surgeon and explorer, and two  cinematographers. Withington, presenting the façade of a serious investigator searching for evidence of Neanderthal Man, told A.O. Neville, chief protector of Aborigines in Western Australia, that he was also making a film about Aboriginal life for educational purposes. After leaving Australia, Neville became increasingly concerned about this film. His queries to Porteus were met with uncertainty, and he received only silence from Withington. When the film was finally released, its representation of Aboriginal life was grossly distorted. This had far-reaching consequences for future researchers in Western Australia’. (Geoffrey Gray, 2005).

This controversial film only managed to see the light of day because of a highly unethical and extreme editing process: what was supposed to be legitimate documentary film footage was manipulated in a sinister and cynical manner in order to produce a sensationalist film that was only ever screened in North American movie theatres, gaining a short release in 1932. The film was banned in Australia and until recently had never been screened publically in this country (the film received its first public screening in Australia during Indigenous artist Brook Andrew’s exhibition Taboo at the MCA in Sydney in December, 2012). Previously, the film had been thought lost until a partially reconstructed version of the film, restored from a nitrate dupe negative, surfaced and was screened at the XXXI Mostra Internazionale del Cinema Libero (Il Cinema Ritrovato) in Bologna, June–July 2002. For an account of the making of this film, see Geoffrey Gray, Looking for Neanderthal Man, finding a captive white woman: the story of a documentary film, in Health and History, vol. 8, no. 2, 2006.