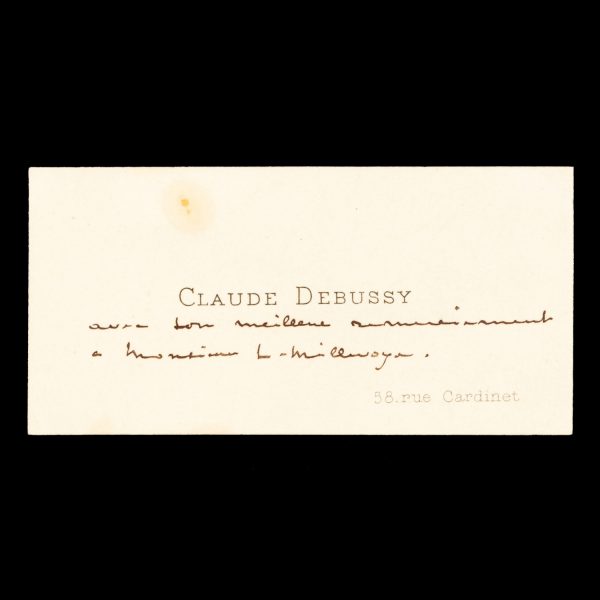 Claude Debussy : autograph note on his personal calling card, circa 1900.

Rare example of the personal calling card of Claude Debussy (1862-1918), one of the most influential composers in the history of Western music in the nineteenth and twentieth centuries, bearing a short inscription in his own hand.

Between 1899 and 1904 Debussy lived at 58, rue Cardinet in the 17th arrondissement of Paris with his wife, Marie-Rosalie Texier (known as “Lilly”), whom he married in October 1899. Their marriage ended in August 1905. During this period Debussy completed his only opera, Pelléas et Mélisande. Considered a masterpiece of twentieth-century music, the work was premiered by the Opéra-Comique at the Salle Favart in Paris on 30 April 1902.

Debussy’s note thanks the journalist and right-wing politician Lucien Millevoye (1850-1918) – although for what, precisely, it is not clear. Millevoye served as the deputy for Paris from 1898 until his death, and he was a key participant in the major political scandal of the Third French Republic known as the Dreyfus affair. He is well known for his long-standing relationship with Irish revolutionary Maud Gonne, which ended in the summer of 1900.