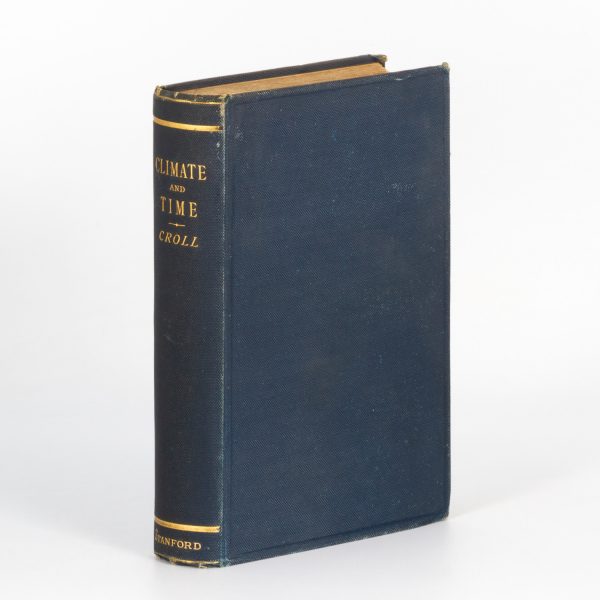 Climate and time in their geological relations : a theory of secular changes of the earth’s climate.

‘James Croll (1821-1890) was a Scottish scientist who developed an astronomical theory of climate change 60 years before Milutin Milankovitch published a very similar theory …His researches on the probable causes of climatic change extended over a period of eleven years, and were published in 1875 in one volume entitled “Climate and Time.”  This work embodies Dr. Croll’s main contributions to the scientific research of his time. His contention was that glacial cycles arise indirectly from cosmical causes.  He investigated the problem of the eccentricity of the earth’s orbit and its physical relations to the Glacial period. By means of Leverrier’s formulae, he calculated tables of eccentricity for three million years in the past and one million years in the future, with the view of determining periods of high eccentricity, which, according to his theory, were coincident with cycles of extreme cold.

He next pointed out the various physical agencies affecting climate resulting from periods of high eccentricity, of which by far the most important is the deflection of ocean currents.  He called special attention to the influence of the Gulf Stream as an agent in the distribution of heat on the surface of the globe.  He held that a high condition of eccentricity produces an accumulation of snow and ice on the hemisphere whose winter occurs in aphelion, and that opposite effects supervene on the other hemisphere which has the winter in perihelion.  When the northern hemisphere is being cooled, the north-east trade winds far exceed in strength the south-east trade winds, and thus deflect the Gulf Stream into the Southern Ocean. The deflection of this warm current, combined with other causes, would place Europe under glacial conditions, while the temperature of the Southern Ocean would be raised.’ – Geological Society of Glasgow website https://geologyglasgow.org.uk/archive/james-croll/