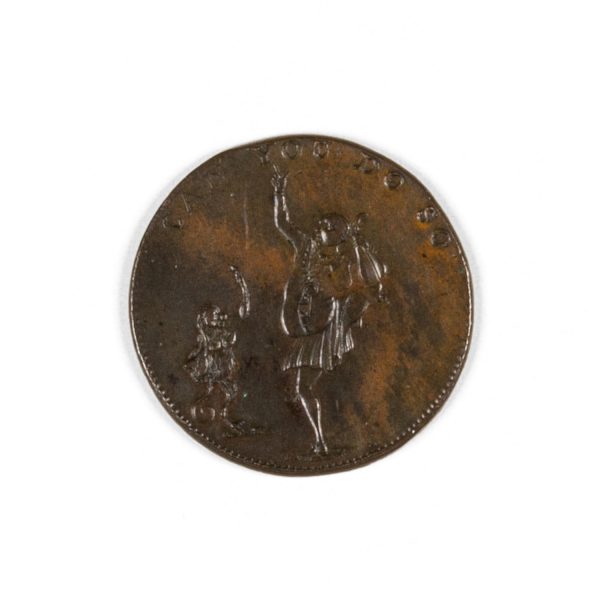 London : Robert Heslop, n.d. [c.1795]. Æ halfpenny, diameter 29.7 mm. Obverse: A male contortionist and a monkey. Around the perimeter: CAN YOU DO SO. Reverse: An inscription on six lines THE FIRST SHOP IN LONDON FOR NATURAL CURIOSITYS PAINTINGS COINS COLOURS FOR ARTISTS &c. Around the perimeter: R. HESLOP NO. 86 CHISWELL STREET FINSBURY SQUARE. A fine example with dark brown patina.

This privately issued halfpenny advertises the Finsbury Square shop of London dealer Robert Heslop. During the 1790s and early 1800s Heslop traded in an eclectic range of natural history and ethnographic curios – many no doubt acquired directly from sailors and others who had visited New Holland and the South Seas – as well as paintings, artist supplies and coins. The image on the reverse is after an engraving of the famous contortionist Joseph Clark (d. before 1697) by Marcellus Laroon. Titled Clark the English Posture Master, the engraving was published in The Cryes of the City of London Drawne after the Life (1688).

An interesting example of late eighteenth-century British privately issued coinage. Such tokens are known as Conder tokens, after the numismatist James Conder who produced the first catalogue devoted to them in 1798.