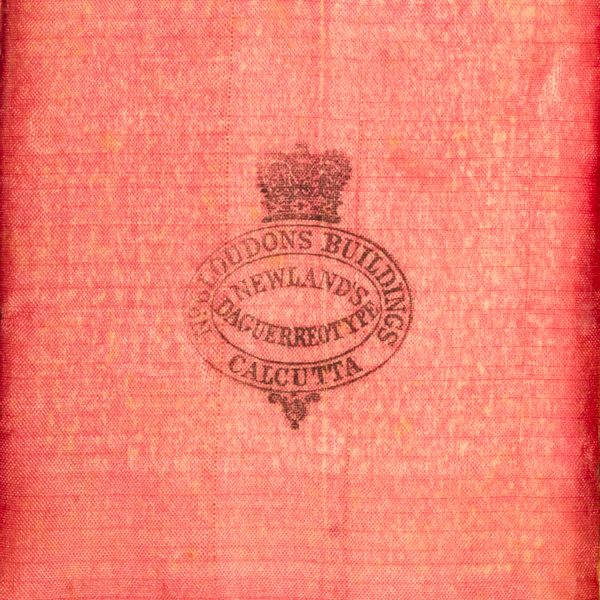 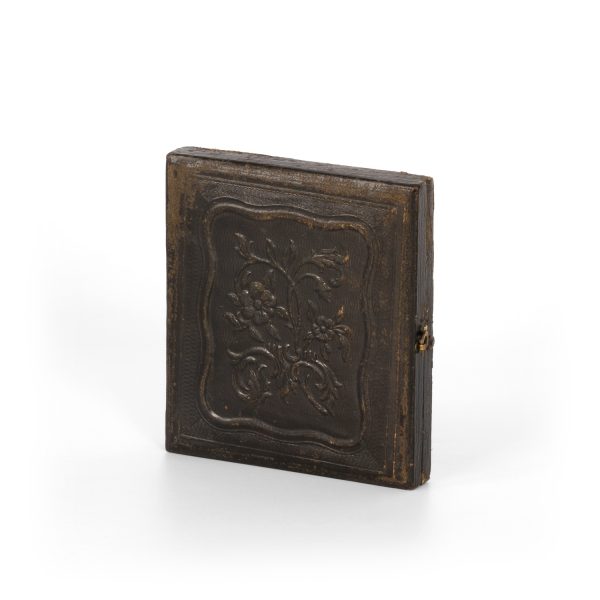 Daguerreotype portrait of a gentleman. Calcutta, circa 1850.

Sixth plate daguerreotype (70 x 56 mm, sight) housed in its original leather case (93 x 82 x 9 mm) with blind embossed floral design to the front; working metal clasp; interior with red silk facing ink-stamped with the studio crest bearing the legend Newland’s Daguerreotype / No. 6 Loudons Buildings / Calcutta; the daguerreotype, with its seals intact and original glass and arched-format brass mat, is a half-length portrait of an unidentified gentleman seated in front of a plain backdrop, his left arm resting on a small table covered with brocade fabric; the exterior of the case is a trifle rubbed at the edges and the hinge is slightly weakened at the foot; the stamped silk lining has been preserved in more or less perfect condition and the daguerreotype – which has a few specks of dust and tiny mould spiders between the glass and the plate – has exceptional clarity.

A rare example of a daguerreotype by the widely-travelled English-born photographer James William Newland (1810-1857), arguably the most significant of early daguerreotypists to work in the Pacific (Tahiti and Fiji, 1847), New Zealand (Auckland, 1847), and Australia (Sydney, Newcastle and Maitland, Hobart Town, 1848). Of the handful of extant Newland daguerreotypes from this period (1847-48), one – his celebrated whole-plate view of Murray Street, Hobart Town, taken in December 1848 – is acknowledged as the earliest surviving Australian view daguerreotype, while another – a tinted whole-plate of Sydney publican Edward Thomas McDonald – is perhaps the most strikingly memorable Australian daguerreotype portrait.

The sixth-plate studio portrait by Newland we offer here, which probably dates to around 1850, was taken in what transpired to be the last phase of both his career and life. On leaving Hobart Newland sailed for India and took up residence in Calcutta, where he opened the first daguerreian studio in that city in 1849. He remained and worked in Calcutta until his death during the Indian Mutiny in 1857. While a greater number of Newland daguerreotypes taken in his Calcutta studio have survived than from his periods of activity in Australia, the Pacific and the Americas, extant examples of these are still of the utmost rarity and each one provides a further valuable piece of evidence demonstrating that Newland was a daguerreotype artist of outstanding ability – indisputably one of the most important pioneers of photography in the Southern Hemisphere.

Newland’s extraordinary life and work are the subject of a forthcoming book by Professor Martyn Jolly and Dr Elisa deCourcy: Empire, Early Photography and Spectacle. The global career of showman daguerreotypist J.W. Newland.

Newland is first recorded as a daguerreotypist in New Orleans, Louisiana in 1845. Between that time and late 1847 he journeyed through the Caribbean, Central and South America, across the Pacific to Auckland, and then on to Australia, where he was working in Sydney by March, 1848.

‘J. W. Newland. travelling photographer and showman, had a daguerreotype studio above Fisher’s store on the corner of King and George Streets, Sydney for three months from March 1848. There he exhibited over 200 daguerreotypes, ’embracing in the collection of specimens, the principal inhabitants of two thirds of the Globe’, which he had shown at Auckland en route to Australia. A major attraction was a group of portraits of Pomare, Queen of Otaheite , ‘in the midst of her sufferings – her husband – her relatives – her friends and councillors – her different classes of subjects – depicted with a faithfulness that cannot be disputed’. There were portraits of natives of Fiji, New Zealand, Peru, Chile and Granada and ‘panoramic views of the City of Arequipa, Peru &c.’ In Sydney he offered to take ‘miniature’ portraits in any weather at prices ranging from a guinea to £5. A splendid full-plate tinted daguerreotype of the Sydney publican Edward T.Y.W. McDonald stamped with Newland’s name verso is in the Historic Photograph Collection (SU). His daguerreotype portrait of Charles Edward Bowler shows equally sharp detailing of features and costume, although it is now quite badly scratched (p.c., copy ML). It too has ‘J.W. Newland’ stamped into the mount.

When the travelling daguerreotype collection was lavishly praised in the Sydney Morning Herald on 14 March 1848, the photographers were identified as the Messrs Newland ‘who have just arrived from London to work in Sydney’. Hence J.W. Newland may well have had a brother or son working with him, despite the fact that advertisements were always in his name alone. He would have needed assistance with his other photographic activity – presenting a ‘BEAUTIFUL SCIENTIFIC EXHIBITION OF DISSOLVING VIEWS’ at Sydney’s Royal Victoria Theatre for a week from 1 May 1848. The spectacle, he said, had previously been shown at the Polytechnic and Adelaide Gallery in London. His views, mainly of monuments and scenery in Europe and Britain, were accompanied by ‘minstrel’ songs, illuminated natural history illustrations incorporating ‘an immense variety of Insects, Animals, &c. from the OXY-HYDROGEN MICROSCOPE’ and a diorama (on rollers) of illuminated scenery, which was reportedly 10,000 feet (3 km) long. The entertainment, advertised as ‘being on a scale of magnificence never before introduced in the colonies’, seems to have been popular. Newland repeated it for three nights in the Sydney School of Arts at the beginning of June, then took it to Newcastle and Maitland, where he set up temporary studios to take portrait photographs at the same time.

From October to December 1848 Newland was in Hobart Town advertising photographic portrait miniatures in morocco cases for a guinea each from his Daguerrean Gallery above Miss Hedger’s shop in the Stone Buildings, Murray Street. Again he displayed the 200-odd daguerreotypes he had taken during his travels (now including Sydney street scenes). G.T.W.B. Boyes had his portrait taken for Lady Franklin, but considered it ‘a poor likeness’ despite Newland’s two attempts. From his studio window early in December Newland took Australia’s earliest surviving Australian view photograph, a whole-plate daguerreotype of Hobart Town showing the public buildings in Murray Street, the wharf and a corner of the old gaol. It is now in the TMAG, still in its original Huon-pine frame.

Newland left Van Diemen’s Land late in December 1848. He had a studio at Calcutta in 1852-54, his Daguerrean Gallery being considered the first professional daguerreotype studio to be established in that city (although professional calotypists had worked there from 1849). Two surviving daguerreotype portraits in the Mitchell Library were probably taken there.’