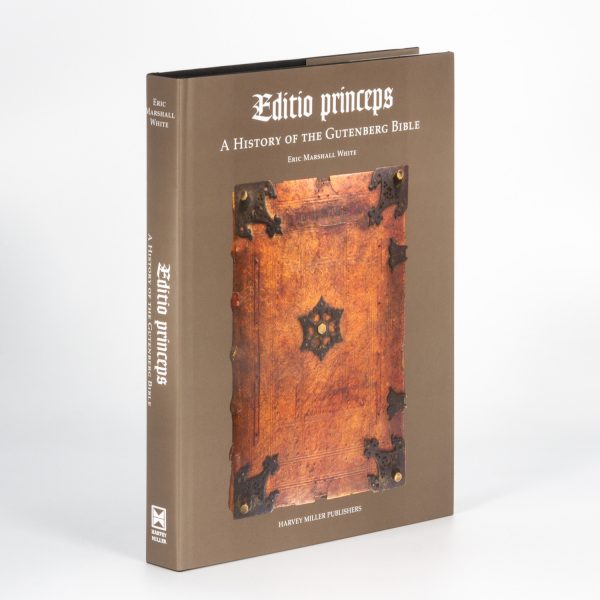 Editio princeps : A History of the Gutenberg Bible

The first complete history of all the Gutenberg Bibles.

Winner of the 2018 DeLong Book History Prize, awarded by the Society for the History of Authorship, Reading and Publishing (SHARP)

The Gutenberg Bible is widely recognized as Europe’s first printed book, a book that forever changed the world. However, despite its initial impact, fame was fleeting: for the better part of three centuries the Bible was virtually forgotten; only after two centuries of tenacious and contentious scholarship did it attain its iconic status as a monument of human invention. Editio princeps: A History of the Gutenberg Bible is the first book to tell the whole story of Europe’s first printed edition, describing its creation at Mainz circa 1455, its impact on fifteenth-century life and religion, its fall into oblivion during the sixteenth and seventeenth centuries, and its rediscovery and rise to worldwide fame during the centuries thereafter. This comprehensive study examines the forty-nine surviving Gutenberg Bibles, and fragments of at least fourteen others, in the chronological order in which they came to light. Combining close analysis of material clues within the Bibles themselves with fresh documentary discoveries, the book reconstructs the history of each copy in unprecedented depth, from its earliest known context through every change of ownership up to the present day. Along the way it introduces the colorful cast of proud possessors, crafty booksellers, observant travelers, and scholarly librarians who shaped our understanding of Europe’s first printed book. Bringing the ‘biographies’ of all the Gutenberg Bibles together for the first time, this richly illustrated study contextualizes both the historic cultural impact of the editio princeps and its transformation into a world treasure.

“This book is breathtakingly erudite, combining archival sleuthing on early business and trade practices with traditional scholarship about provenance and printing. White builds upon and gathers the known facts and myths about the genesis of “the Gutenberg bible.” The study’s tour de force, however, lies in the tracing of ownership history from Mainz in the 15th century to today’s libraries and collectors for every single known copy—using each copy’s unique binding, illuminations, or marginalia as evidence for geographical movement from place to place. (…) This handsomely-illustrated book is deft of touch and can be read or perused by any reader interested in the world’s most famous printed book, while displaying an impressive depth of scholarship. It is a triumphant study.”

“It is essential reading for historians of printed material and printing itself.”

(Elizabeth Savage, in the Journal of the Printing Historical Society, Summer 2018, p. 76)

“How it came to be forgotten, and how it was rediscovered, is the story told by Eric Marshall White, curator of rare books at Princeton University Library, in his scholarly and richly illustrated study Editio Princeps.” (Arnold Hunt, in The Times Literary Supplement, 6072, 2019, p. 27)

“The amount of information can seem overwhelming in such a large and detailed work, but White presents complicated information, such as descriptive bibliography, in simple and easy-to-understand terms, without either complicated jargon or condescension, making this book good for both beginners and seasoned scholars.” (Cassie Brand, in A Journal of Rare Books, Manuscripts and Cultural Heritage, 20/1, 2019)

“Researchers will be especially grateful for the comprehensive data on ownership history (…) The book will also be extremely valuable as a work of reference when identifying and placing fragments and records in relation to the Gutenberg Bible, and for future research on the history of collecting and the reception of early printed texts since the eighteenth century. Thanks to its wealth of illustrations, (…) the book is not only visually appealing but also very suitable for teaching at university level. The book could also inspire an ongoing search for new evidence of individual copies;” (Hartmut Beyer, in German Historical Institute London Bulletin, XLI/II, 2019, p. 126-127)

“As an object, Editio princeps is an attractively printed and beautifully illustrated book. The 1,000 endnotes, extensive bibliography, three indexes, and wealth of information will surely establish it as a standard resource for anyone interested in the foundations of European printing and the cultural history of one of the world’s most famous books. Its receipt of the 2018 DeLong Book History Prize awarded by the Society for the History of Authorship, Reading and Publishing is richly deserved.” (Anthony Tedeschi, in Script & Print, 42/4, 2018, p. 246)