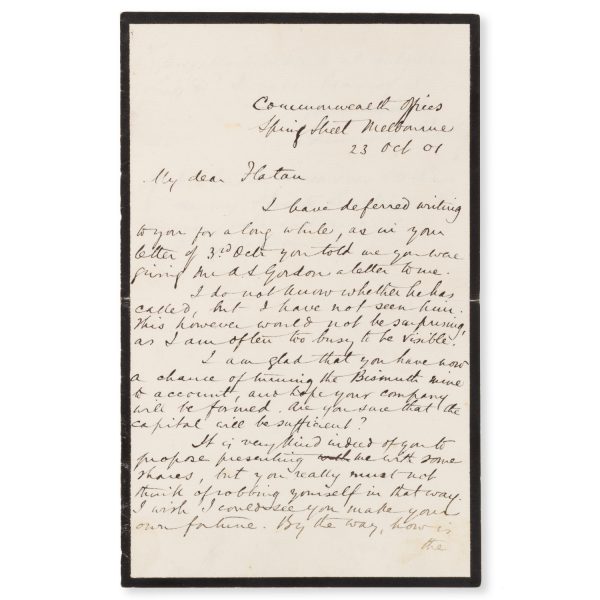 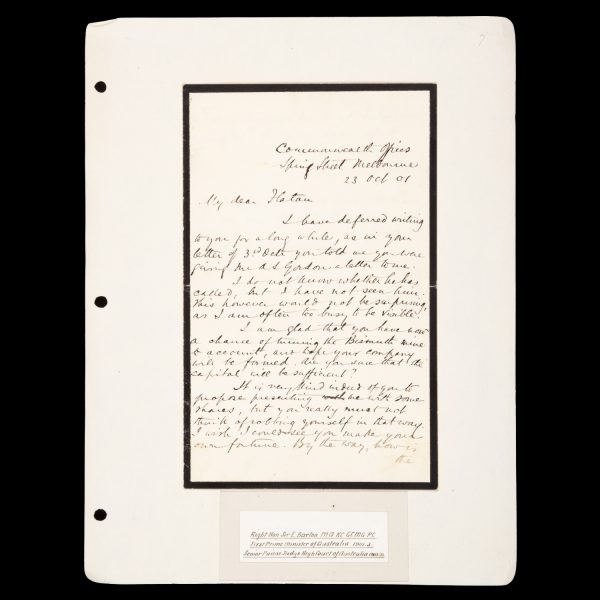 Manuscript in ink on black-bordered note paper, bifolium (200 x 125 mm), letter written entirely in Barton’s hand occupying the first side and half of the third side, headed ‘Commonwealth Offices, Spring Street, Melbourne, 23 Oct. 01’; addressed to ‘My dear Flatau’ [i.e. mining speculator Dr. J. M. Flatau], and signed at the foot ‘Yours sincerely, Edmund Barton’, the note concerns Barton’s and A. S. Gordon’s investments in Flatau’s mining interests in Queensland; in fine condition, tipped onto a backing sheet by an early 20th century autograph collector (affixed along the left rear edge only, not affecting the integrity of the document) with the collector’s manuscript label attached at bottom margin.

Sir Edmund Barton (1849-1920) seved as the first Prime Minister of Australia from 1901 to 1903. This previously unpublished item of correspondence from early in his tenure is interesting in that it was written at his prime ministerial desk, despite its contents being private and confidential in nature: the letter concerns his personal financial affairs – specifically, his own personal wealth creation.

Barton congratulates Flatau on finally establishing the (Tarrant & Flatau) bismuth mine at Mount Wyatt, Queensland, and asks if the present capital at his disposal is sufficient. Next, he gives what can only be construed as an equivocal response to Flatau’s offer of a gift of shares: ‘It is very kind indeed of you to propose presenting me with some shares, but you really must not think of robbing yourself in that way. I wish I could see you make your own fortune’. Did Barton eventually accept Flatau’s offer? Irrespective of whether he did or not, the Prime Minister does not even appear to give a second thought to the highly unethical nature of such a transaction. He then goes on to enquire about Flatau’s quicksilver mine at Yulgilbar (also in Queensland), commenting that he never seems to receive any reports about its progress. In a postscript, Barton tells Flatau to instruct fellow investor A. S. Gordon (who has not been able to contact Barton because he has been ‘too busy to be visible’) to see his Private Secretary, Mr. Bavin, ‘who will arrange a meeting between us’.