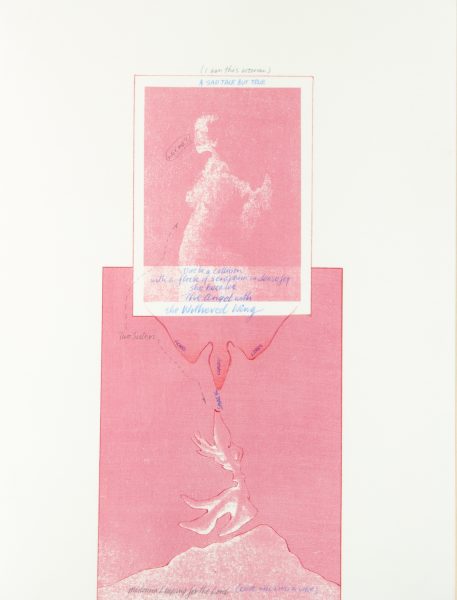 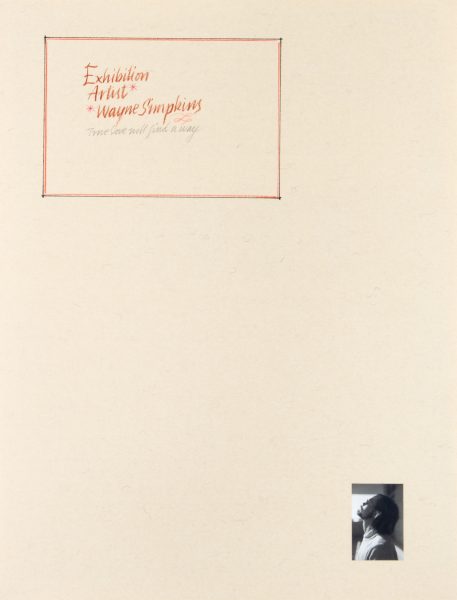 Santa Barbara: University of California, Santa Barbara, 1974. Artist’s book. Card portfolio containing 27 leaves (each numbered and initialled verso), composed in two parts: a catalogue and an autobiography. Each page is made by digital print with collage of photographs, with hand embellishments and pencil annotations. Created in an edition of 10 signed copies. “This is an original manuscript book which was printed and hand written by the artist at the University of California, Santa Barbara. Ten copies exist no two of which are identical although the structure is essentially the same.” – colophon

“This book is an autbiography (of sorts). It is in two parts. Part I is a catalogue of an exhibition of lithographs and drawings by Wayne Simpkins (which is me). Part II contains biographical information about me (by Wayne Simpkins).

Simpkins is currently an Associate Professor at the University of Memphis.

‘I was born in Huntington, West Virginia. My BFA in Printmaking is from Carnegie Mellon University in Pittsburg. I spent two years in the printer training program at the newly established Tamarind Institute, University of New Mexico, Albuquerque and am certified as a Tamarind Master Printer. My MFA in Printmaking is from the University of California, Santa Barbara. I’ve been teaching here since 1974 when I moved to Memphis from Santa Barbara. I thought of myself as a painter until I enrolled in my first printmaking class at Carnegie Mellon. I’m still a printmaker but I moved away from traditional process into mixed media drawing around 1978 using gum printing and drawing media. Today I’m a digital printmaker. I was using Photoshop at version 2.0 and teaching digital imaging in 1995. My work has been almost entirely digital for some time now and very much involved with photography. I am especially interested in the interaction of word and image. ‘

‘My current work is entirely digital. I started out as a painter until I took a printmaking class at Carnegie Mellon University in 1968. Then I realized what bothered me about painting was paint. Not a good thing for a painter. My printmaking work was primarily in intaglio and lithography. I’m a Tamarind trained master printer and I’ve done just about everything printmaking at one time or another. When I moved to Memphis in 1974, I started working with mixed media drawing on  a gum pigment print base layer. I had been making gum prints, which is a photographic process, for several years, and started combining the gum print with drawing and painting media. The transition from wet darkroom negatives and the gum prints to Adobe Photoshop and inkjet printing was pretty much seamless. Now that inkjet prints with a long archival life are possible, my prints are all digital, pigment ink on paper. ” – artist’s statement.

Simpkins’ graphic art is held by the National Gallery of Art, Washington

A striking self-referential and thoughtful catalogue in the form of an artists book, an artwork in its own right.