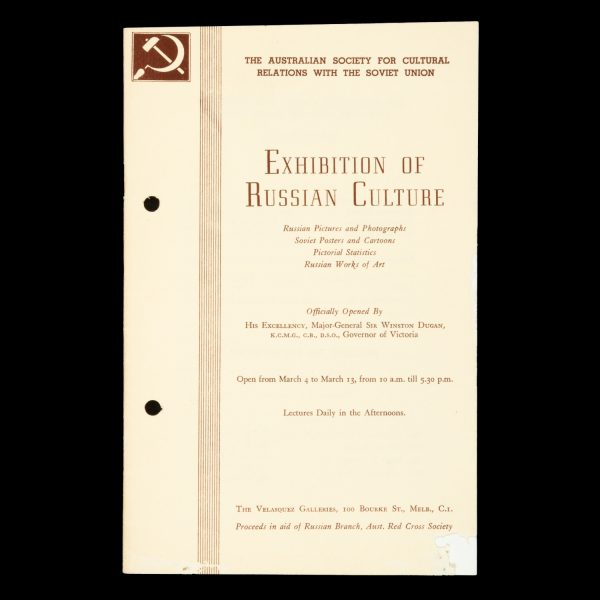 A highly significant catalogue which illustrates the sympathy towards Soviet socialism held by many Australian intellectuals and artists of the 1930s and 40s. The Victorian Branch of the Australian Society for Cultural Relations with the Soviet Union counted among its eight vice-presidents such academic luminaries as economists Professor John Crawford and Professor L. F. Giblin. Melbourne artist Marguerite Mahood was on the organising committee for the exhibtion.

The catalogue frames Russia as a great Ally in the war against Fascism, and the foreword contains a well-intentioned but politically biased statement which, blind to the horrors of Stalinist Russia in the 1930s – the Great Terror, the Gulag, the Holodomor, the Kazakh Famine – tells the reader that they have been “ill-informed” about the marvellous life and achievements in that country. There follow four short pieces by Prominent Citizens (Rivett, Streeton, Fairfax and Lowe), each a paean to different aspects of Russian culture (literature, music, ballet, art and craftsmanship – although the comments ironically mention only pre-revolutionary figures) or socialist progress (agricultural and industrial development). Sir Arthur Streeton, painter-turned-social commentator, opines naively: “The Russians appear to-day a transformed nation where their vast population are all workers and apparently happy under communal laws”.