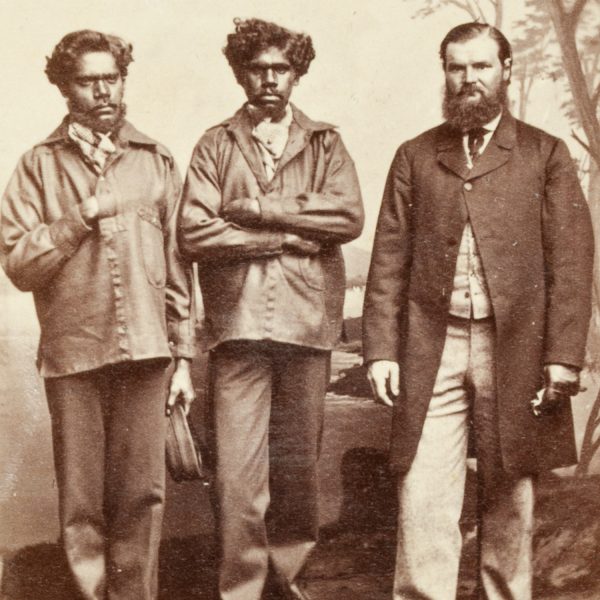 An extremely rare carte de visite of the explorer William Landsborough and his two Aboriginal guides, Jemmy and Jack Fisherman, taken in Melbourne in October 1862 after they had completed the first north-south crossing of the continent from the Gulf of Carpentaria.

In 1861 Scottish-born William Landsborough (1825-1886), a pioneer pastoralist of Central Queensland with extensive knowledge of the interior of the country, had been chosen by the Victorian and Queensland governments to lead a relief expedition in search of Robert O’Hara Burke and William Wills. His small party of eight men, which initially included four Aboriginal guides, headed south from the Gulf of Carpentaria in January 1862 after their first attempt was abandoned due to the threat of flooding. After learning of the fate of Burke and Wills on their arrival at Williams’ station in late May, 1862, the party pushed on southward and eventually reached Melbourne in October.

Two of Landsborough’s Aboriginal guides are posed beside him in this portrait taken in the Collins Street studio of Batchelder & O’Neill: Jemmy, pictured on the left, was a Queensland Native Mounted Police trooper originally from the Deniliquin district in southern New South Wales; while Jack Fisherman, at the centre of the trio, hailed from the Moreton Bay region.

The only examples of this carte de visite which Trove locates are those in the collections of the State Library of Victoria and Federation University (Australia Historical Collection. Geoffrey Blainey Research Centre).

Provenance: Alexander Sloane, of Mulwala and Savernake Stations, southern New South Wales; thence by descent. (Note: both Sloane and Landsborough were from Ayrshire in Scotland)