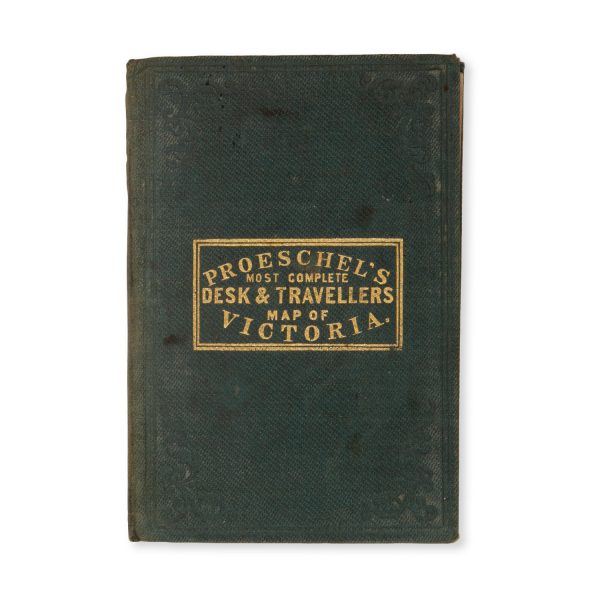 Compiled and reduced from the government maps. [Melbourne : F. Proeschel, 1859]. Map measuring 470 x 525 mm, steel engraved by J. Grieve, laid on linen, the map with original hand colouring showing the delineation of counties and location of the gold fields, with inset maps of the world on Mercator’s projection, the southern hemisphere and the Australasian region; central vignette by noteworthy goldrush artist David Tulloch of a gold miner with equipment standing before a heraldic coat of arms and background of gold miners and a colonial township, native Aborigines and wildlife also included, two further vignettes by Tulloch of the Town Hall in Geelong and the New Treasury in Melbourne. Housed in the publisher’s gilt-lettered green cloth case, lettered ‘Proeschel’s most complete desk & travellers map of Victoria’, with 35 page booklet ‘References, or lists and tables of all the features delineated upon the Map of Victoria, by F. Proeschel …’.

Below the map are several statistical tables concentrating on gold production and economic output of Victorian townships and other places of the world, the latest dates 1858, with the concluding statement ‘The above tables show, that of all the principal civilized countries in the world, Victoria, has per head, the greatest value of export, and is the greatest consumer of British products’.

A rare and important separately issued gold rush map with a great deal of geological and social detail.