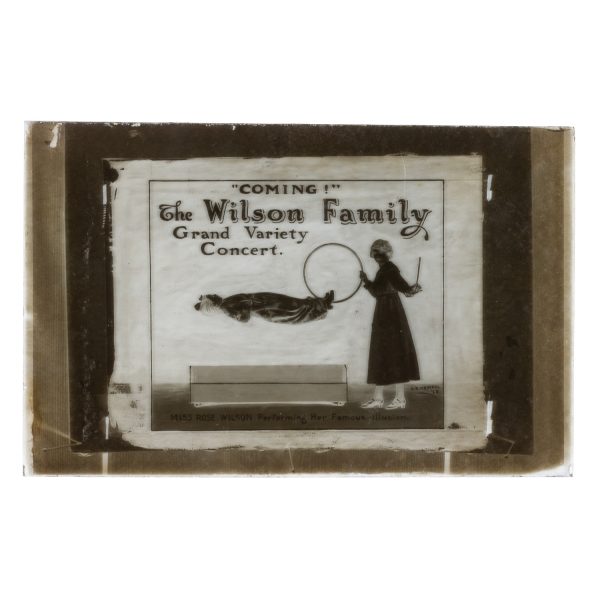 A World War One-era glass cinema slide that came with a group of related slides used in the Dandenong Picture Theatre, which opened in 1916.

The following review of a concert by the Wilson Family at the Dandenong Town Hall – very possibly the forthcoming concert advertised on this glass slide – appeared in the South Bourke and Mornington Journal, on 23 May 1918:

‘Wilson Family Cocert. On Wednesday evening, May 15, a variety entertainment was given in the Dandenong town hall by the Wilson family. The attendance, like the prevailing weather, was somewhat “thin,” but notwithstanding the inclement conditions and that there was a counter attraction, it was considered good. The programme given, which took the form of a vaudeville show, was of an unique kind, every performer being a mamber of the same family, and considering they were just in their teens and mere youngsters many of the turns were of a high order, particularly the step and ballet dances. The illusions and tricks were also good. Master Cyril, as comedian and balancer. did his part in such a way that would have been creditable for an adult : Miss Rose as illusionist, met with pleasing result ; Miss Mabel proved an exponent at the various step dances, and Miss Ivy sang her ballet songs with some fervour ….’

The reviewer goes on to provide a detailed description of the various acts, and notes in closing that ‘It has been decided to repeat the performance on June 24.’