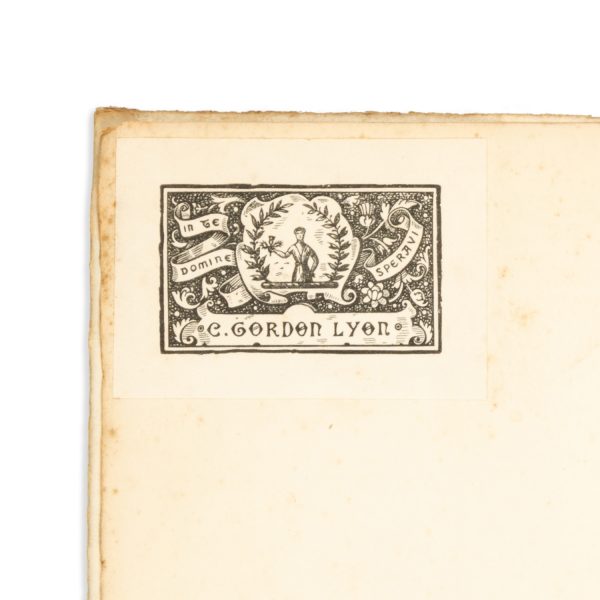 Compiled by Lord Brassey, Governor of the Colony of Victoria, and self-published in Melbourne in 1899 while he was still in office, this is a two-part anthology of short quotes and longer extracts, touching on a huge variety of subjects, from the prose and poetry of celebrated writers and thinkers throughout history. It followed on from a similar format publication which Brassey had printed in London the previous year (Gleanings : a Christmas card for 1898).

Lord Brassey presented this copy to Evaline “Queenie” Calvert, only daughter of Mr. John Calvert of Irrewarra, Colac. A report on her wedding to Charles Gordon Lyon (1867-1958), son of Mr. C. H. Lyon of “Bellann”, Ballan, was published in Table Talk (Melbourne), on 26 April 1900. The book has Lyon’s ex libris and was sourced with a companion – a copy of Gleanings : a Christmas card for 1898 inscribed by Brassey for Lyon himself.

From History of West Australia, by Warren Bert Kimberly:

‘In Western Australia several names are associated with the glories of the goldfields, and one of these is that of Mr. C. Gordon Lyon. He struck the key to his fortune at a time when the ears or the earth were open to the startling news of the gold discoveries of Coolgardie. Nor is it surprising that his name is a household word in financial chambers, when his active judgment gave quick expression to acts whose subsequent narration will prove the title-deeds of his admission within the narrow pale of Coolgardie’s most famous names. The son of a squatter, Mr. C. Gordon Lyon, was born in Melbourne, Victoria, in 1867. On completing his education at the Geelong Grammar School he followed station and pastoral pursuits for some time. Such a life spent among solitary and distant fields, with an ever-recurring monotony or sameness, did not satisfy his emotional mind. Day after day, wandering over silent vales, whose sole response to his active mind was the hush and death-like silence of tle land around, he held communion with himself on the questions next his heart. Science, with its fascinations, depth, and excitement, grew more and more to be the one thing on which his mind lingered. He resolved to taste its fruits in the laboratories of his native place. There, under Professor Newbery, he engaged in an earnest study of chemistry, mineralogy, assaying, and every department that conduced to a thorough knowledge of mining. The few years of his life spent among the rustic fields had inevitably blunted his earlier acquisitions. To grind these again to a keen edge devolved upon him harder brain exercise and mental strain. Still his insatiable desire led him victorious through the many narrow avenues of science. Work, which is the secret of genius, sounded for him the trumpet of triumph. When the autumnal season of his University career was over he had gathered in a stack of knowledge whose size and shape allowed ample room for jealousy among his brother-builders. His career was brilliant when we consider his handicap, and had he gone straight from the class-room of Geelong school to the experimental doors of University science, his record would have been more notable.

After three years’ residence in Melbourne he left for Broken Hill, where he started, in partnership with Mr. Everard Brown, as assayer and mineralogist. The partners had no reason to be dissatisfied with their success in this silver-bearing area, for their business had a wide and lucrative connection till the hub and excitement settled down, when Broken Hill became stripped of individual energy, and companies, solidified and exclusive, took the whip-hand of events. Mr. Gordon Lyon went from there to Zeehan, in Tasmania, which owned rich silver mines. He stayed there eighteen months, amid comparatively unexciting surroundings, till news of finds in Westralia made him pack up and sail for her shores. In October, 1892, he arrived in company with his two friends, Sylvester and Everard Browne. Their first intention was to go to the Murchison, which was yielding fair returns of gold, but the simultaneous report of Bayley’s discovery at Coolgardie diverted their attention from the Murchison, and made them set out on the tedious journey to Coolgardie. They drove from York over that desolate coach track that has been so often referred to for its incomparable dreariness. One can easily imagine their delight when, alighting item the coach, they found one human being in that far-desolate land, and this was Bayley himself. They inspected the Reward Claim, purchased it immediately, and floated it in Melbourne for £24,000. Not long after they purchased Bayley’s South, and floated it for £40,000. These two flotations, executed so rapidly and so seasonably, made the names of Lyon and his associates especially conspicuous at a time when the gold-mining industry was flagging in Australia. From one acquisition they went on to another, and in a short time they bought and developed No. 1 North and Ford’s Hill, which were recently amalgamated by them with Bayley’s Reward. They were the fortunate purchasers of the Imperial Reward Claim at Mount Malcolm and the Australia United adjoining it. The former of these is being developed by them for an English Exploration Company which has lately acquired it. The latter was disposed of for a handsome sum to a syndicate.

In Kalgoorlie, Menzies, and Mount Margaret Mr. Gordon Lyon has extensive and wealthy interests. He takes a personal interest in the development of every mine with which he is connected. He has been one of the directorate of the Bayley’s Reward Mine and No. 1 South ever since their flotation.

In Coolgardie, whose honour and interests he has always endeavoured to advance, he has been a leading citizen. His belief in the goldfields is notably evinced by his wide investments in town lots. He was one of the first Justices of the Peace gazetted in the district. As a true Australian he has always lent his patronage to sport. Liberal in his generosity, keen and enthusiastic for local supremacy, he has often given a stimulus to various clubs which found in vent renewed and revivified activity and vigour. He is vice-president of the Coolgardie Racing Club and an ex officio member of committee. In almost all the local teams he occupies honorary official positions. By the kind attention he gives to the interests of sport, often too at the sacrifice of personal concerns, he has received their heartfelt tokens of gratitude.

Yet sport is secondary, and dwindles into insignificance, when we reflect on his services to the higher interests of the town. His name is one of the strongest links in the welfare of that town wherein he has now for long made his home. There is no half-way houses in his actions, no circuitous wandering round his affirmations or decisions. He speaks his mind boldly, yet diplomatically, and his advice or warning sounds the following of his many counsellors. No name in Coolgardie is mentioned with greater reverence and respect than Mr. Lyon’s who, by his sincerity, his ability, and early judgment, has assisted greatly in raising Coolgardie to the proud position she now holds as the centre of the goldfields. Though stemming his course through a flood of private business, he yet finds time to pause midway in the stream and meditate on some policy which would confer more lustre and fame on the goldfields.